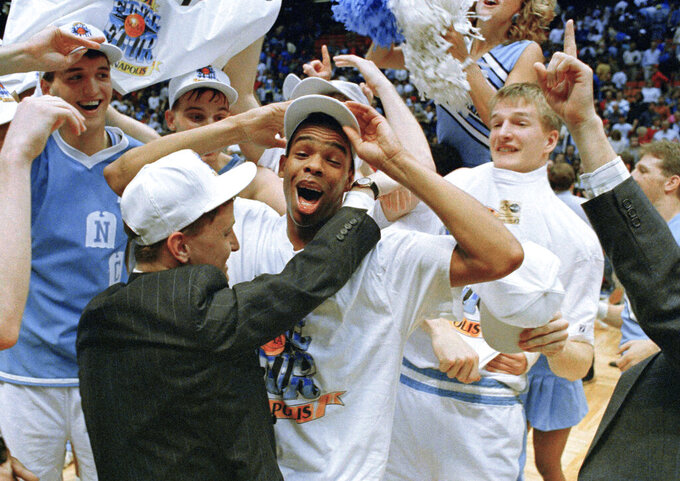 CHAPEL HILL, N.C. (AP) — From his place in what amounted to the North Carolina basketball alumni section, George Lynch became transported back to 1989, back to college and his freshman season, while he looked with pride Tuesday afternoon during Hubert Davis’s formal introduction as new coach of the Tar Heels.

What stirred for Phil Ford carried him even further, back to the 1976 Olympics and the return trip from Montreal, a ride of more than 600 miles to Northern Virginia in a car that included Walter Davis and his young nephew Hubert, then 6 years old.

“Hubert rode in the backseat, with our gold medals around his neck,” said Ford, the former North Carolina star guard and assistant coach. “So yeah, I’ve known him a long time, and I’m extremely happy.”

A feeling of profound connection and family approval permeated the baby blue surroundings here at the Smith Center, as Davis, officially elevated from assistant coach to first-time head coach, and charged with replacing a legend in Roy Williams, held court — the start of a new era and the continuance of an enduring tradition occurring all at once.

The nephew of Walter Davis, the former North Carolina standout and NBA All-Star, Hubert Davis played for the Tar Heels under the iconic Smith from 1988-92, worked under Williams as an assistant during the last nine seasons, and now, entrusted to lead the program his mentors have built and maintained, he serves as a link across generations.

All in the family, reinforced all over again.

Lynch, the former forward and key piece of Smith’s 1993 NCAA championship team, sat in a chair Tuesday on the floor that bears Williams’ name, in the building named for Smith. He soaked in the passion and conviction and emotion pouring from Davis about his reverence for the purpose behind the Tar Heels program, and likened the experience to Chapel Hill time travel in some ways.

“It brought back ’89 when I came in as a freshman,” Lynch said. “Hubert, Rick Fox, King Rice, all those guys helped recruit me to come here and play. It brought back all of those memories, and I’m sure it’s the same way for a lot of Carolina guys, those same words that Hubert spoke on.

“I’m excited and ecstatic that we kept the job in the family. It’s very important. It means a lot to every player who’s ever played for Coach Smith, it means a lot for every player who’s ever played for Coach Williams. Because that’s what they recruited us on — family, tradition, staying together. Hubert stressed that over and over out there on the stage, and I think as long he continues to walk the walk of Coach Smith and Coach Williams, he won’t go wrong. He’ll be very successful.”

Jackie Manuel, the former defensive stopper on Williams’ 2005 NCAA championship team, called Davis “someone I can talk to about anything,” and said “he has great wisdom for me, like a big brother.”

There was Smith’s son Scott on hand to welcome Davis, and a cast of former North Carolina assistant coaches such as Eddie Fogler, Joe Holladay and Dave Hanners. Former players such as Bill Chamberlain, Serge Zwikker, Kenny Williams and Mitch Kupchak, the Charlotte Hornets general manager, and current players including Leaky Black. Sean May, the Most Outstanding Player of the 2005 Final Four, who has worked with Davis on Williams’ coaching staff, was there. The list went on and on.

And of course, there was the 70-year-old Williams, five days removed from the stunning revelation of his retirement, after 18 seasons in charge of the Tar Heels and 903 victories altogether across his head coaching career. He took a front-row seat alongside Davis’s father and family members. Williams saluted Davis at times, and couldn’t hold back tears at others.

“I’m as happy as I’ve been in my life,” Williams said later, beginning to make his exit and offering another approval of Davis’s hiring as his successor.

In one of Tuesday’s many striking moments, Davis said last week he got a text from Hall of Fame coach Larry Brown, the former standout player in the 1960s at North Carolina. It was one of the first messages Davis received after Williams delivered the surprising news of his retirement.

Davis said he hadn’t seen or spoken to Brown since 2004, when they were with the Detroit Pistons. Davis’s 12-year NBA career was nearing its end then, and the two disagreed about playing time. Davis felt he still had some gas in the tank, but Brown, the Detroit coach, didn’t make him part of the Pistons’ regular rotation. Eventually, Davis asked to be waived and the organization obliged, letting him go before he was picked up by the New Jersey Nets.

Davis said over these last 17 years, he always felt as if Brown simply didn’t like him. Then came the text message last week, in the wake of Williams’ retirement.

“He said, ‘Hubert, I just wanted to let you know, I would love for you to be the next head coach at the University of North Carolina, and Coach Smith, the idea of that happening, would put a smile on his face,’ ” Davis said, choking up. “And I just immediately started crying. I gave the phone to my wife and I said read this. And I said, ‘I thought he didn’t like me.’ And to me that’s just the perfect example of what this place is all about.”