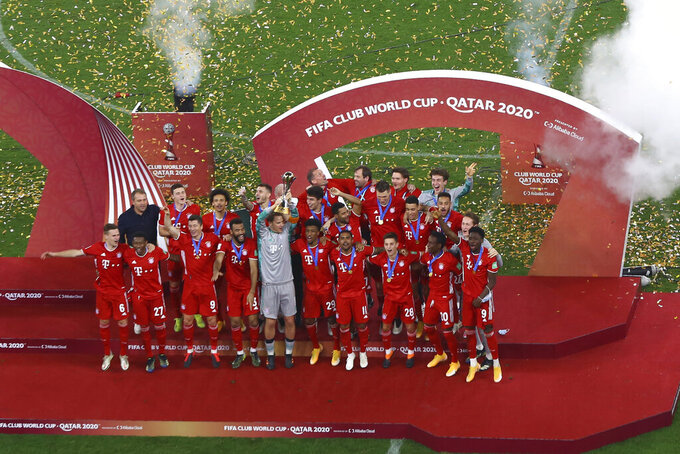 Bayern Munich’s annual general meeting ended in tumult with members yelling and booing the club’s directors for refusing to discuss its sponsorship arrangements with Qatar.

“We are Bayern! You are not!” irate fans chanted at club president Herbert Hainer, chief executive Oliver Kahn and other presidium members late Thursday. “We are the fans that you don’t want!”

Tempers frayed following club member Michael Ott’s unsuccessful attempt to lodge a motion calling for a vote on Bayern’s contentious sponsorship agreements with Qatar. Ott, and many other Bayern fans, contend that the partnership with Qatar Airways through 2023 is damaging the club’s reputation because of alleged human rights abuses in the Persian Gulf country as it prepares to host next year's World Cup.

Ott’s initial attempt was blocked on technical grounds because of a club statute by Munich district court, but he had hoped to put it forward anyway with the support of more than 75% of the members at the AGM.

Ott said the Bayern club officials should have allowed the members discuss the merits of the motion “and then maybe just do a non-binding survey.”

“Whether it was legally OK or not to refuse the vote on this motion, it would have been a question of good character to at least allow me to hold my speech that I had prepared,” Ott told The Associated Press on Friday.

Meyer said Ott was welcome to go back to court to fight his case, prompting a chorus of boos, whistles and shouts from the majority of members attending.

“I had a prepared a 15- to 20-minute speech,” Ott told the AP. “I wanted to lay out for all the problems that exist in Qatar and … why it is in itself wrong to do a sponsorship deal with Qatar. It’s just distracting from the problems in Qatar, and not at all helping to bring change to Qatar. All the experts say if you want to change something there, it’s only possible with public pressure. And that’s the thing that FC Bayern never wants to do.”

At a Bundesliga game on Nov. 6, Bayern fans displayed a huge banner criticizing the club for the “sports washing” of human rights abuses in Qatar through its partnership with Qatar Airways. The club has also been holding mid-season training camps in Qatar since 2011.

The banner depicted Kahn and Hainer laundering blood-stained clothes in a washing machine under the words, “For money, we’ll wash anything clean.”

Bayern coach Julian Nagelsmann defended the club’s stance at the time, saying it tried “to influence things through dialogue and not by exclusion or looking the other way.”

In August, Amnesty International accused Qatari officials of doing little to investigate thousands of young migrant workers’ deaths in the country over the past decade.

“We need to change our statutes to make sure that we can vote on hot topics,” said Ott, who has been a club member since 2007.

He said the response he has received from fellow Bayern supporters has been mostly positive.

“I had a priest who wrote to me today, a mayor wrote me, and lots of people are encouraging me to continue the fight,” Ott said.

Only 780 members from a possible 1,700 attended the club’s AGM because of strict coronavirus restrictions in Bavaria, which is going through a surge in infections. Those attending reacted furiously when Hainer abruptly ended the meeting despite other members waiting their turn to speak.

News agency dpa reported that one member simply stood on a chair and spoke without a microphone, while most fans present reacted with shouts of “Hainer out! Hainer out!”

Hainer appeared surprised by the reaction.

“Say, what’s going on?” the former Adidas chief executive said into his microphone.

Former club president Uli Hoeneß, who had been sitting the first row, said it was “the worst event that I have ever experienced at FC Bayern.”

Earlier, the club reported a drop in revenue because of the coronavirus pandemic. Bayern still recorded a pre-tax profit of 5 million euros ($5.65 million) from revenue of 643.9 million euros (728 million) for 2020-21.