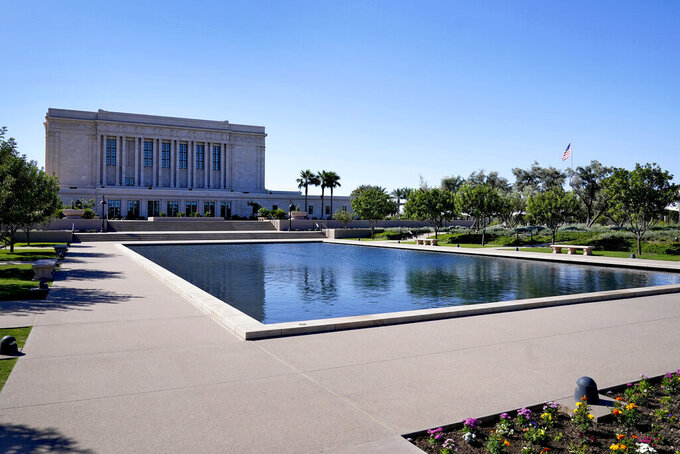 Matt York, ASSOCIATED PRESS
The Mesa Arizona Temple is shown Friday, Oct. 15, 2021, in Mesa, Ariz. After being closed for over three years, the oldest Arizona temple of The Church of Jesus Christ of Latter-day Saints is opening for five weeks of public visitation in advance of its rededication on Dec. 12. The Mesa Arizona Temple closed in May of 2018 for a major renovation that included new roofing and drainage, windows, furniture and finishes, a new visitor's center, trees and landscaping. (AP Photo/Matt York)

MESA, Ariz. (AP) — After being closed for over three years, the oldest Arizona temple of The Church of Jesus Christ of Latter-day Saints is opening for five weeks of rarely allowed public visitation in advance of its rededication on Dec. 12.

The Mesa Arizona Temple was shuttered in May 2018 for a major renovation that included new roofing and drainage, windows, furniture and finishes, additional trees and landscaping, along with construction of a new visitors center.

The visitation period that began Saturday will run through Nov. 20 with tours offered daily except Sundays. Church officials said they anticipate strong interest in the tours and they recommended making advance reservations.

After the public visitation period leading up to the rededication, access to the sacred temple then will be limited to church members.

In what is widely known as the Mormon church, temples are different from chapels or meetinghouses, where Mormons attend Sunday services and where anyone is welcome to worship. Temples are where special ceremonies such as marriages are held.

“When the members of our church come and experience their time in the temple, they’re able to put aside their cares and their worries of the world and enter into a sacred space,” said Elder Ronald A. Rasband, a member of the Quorum of the Twelve Apostles.

It is only the third time in its nearly 100-year history that the Mesa temple has been open to the public, KNXV-TV reported.

Originally known as the Arizona Temple, the Mesa temple was originally dedicated in 1927 and it was rededicated in 1975 following expansion and remodeling.

Some of the recent renovations, including neoclassical area rugs and furniture, checkerboard floor patterns and new door hardware, are meant to recreate the temple as it was when it first opened in the 1920s, the Arizona Republic reported.

The church established deep roots in Arizona in the 19th century when thousands of Mormon settlers made difficult treks from Utah across hundreds of miles of desert and the Colorado River.

Once in Arizona, Mormon settlers established communities such as Mesa, Gilbert, Snowflake and Safford.

The church’s other temples in Arizona are located in Gilbert, Phoenix, Tucson, Snowflake and near Thatcher.