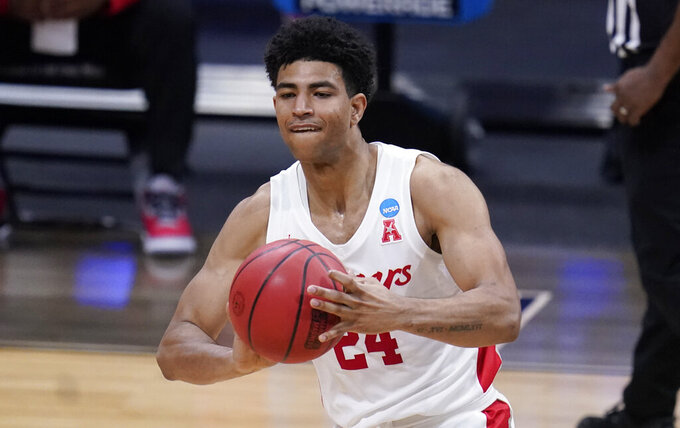 Michael Conroy, ASSOCIATED PRESS
FILE - In this March 27, 2021, file photo, Houston guard Quentin Grimes passes the ball against Syracuse in the second half of an NCAA men's college basketball tournament game in Indianapolis. Grimes was selected in the first round of the NBA draft Thursday, July 29. (AP Photo/Michael Conroy, File)

The New York Knicks ended up with guard Quentin Grimes with the No. 25 pick in the NBA draft after dealing two picks that were higher.

The swap of their No. 21 pick for No. 25 left them with Grimes, a third-team All-American from Houston who came with a pick that belonged to the Los Angeles Clippers.

The Knicks also acquired a future second-round pick in that deal, with the Clippers getting the draft rights to forward Keon Johnson.

Grimes was the player of the year in the America Athletic Conference after averaging 17.8 points. He shot 40.2% from 3-point range to lead the conference, making 3.3 3-pointers per game.

The Knicks hope he will be.

They had a surprisingly successful first season under Coach of the Year Tom Thibodeau, earning the No. 4 seed in the Eastern Conference for their first postseason berth since 2013.

But their five-game loss to Atlanta showed a need for more offensive help around All-Star Julius Randle, and perhaps Grimes can provide some.

He began his career with one season at Kansas before transferring to Houston for his final two. He led the Cougars to a 28-4 record last season and their first Final Four berth since 1984.

The Knicks also acquired a future first-round pick by sending the No. 19 pick to Charlotte. That pick was used on Texas center Kai Jones.

The trades indicate the Knicks may have been saving money to maximize their chances in the upcoming free agency period, when they are in position to afford two top players.

The Knicks later acquired the draft rights to Miles McBride and Rokas Jokubaitis from the Oklahoma City Thunder for the rights to Jeremiah Robinson-Earl.

McBride, taken with the No. 36 pick from West Virginia, is a strong defensive guard who also led the Big 12 last season with two 30-point games. He was in the league's top five in scoring, assists and steals as a sophomore.

They ended their draft by taking Texas center Jericho Sims with the No. 58 pick. The 6-foot-10 Sims helped the Longhorns win their first Big 12 tournament title with 21 points and 14 rebounds against No. 1 pick Cade Cunningham and Oklahoma State.