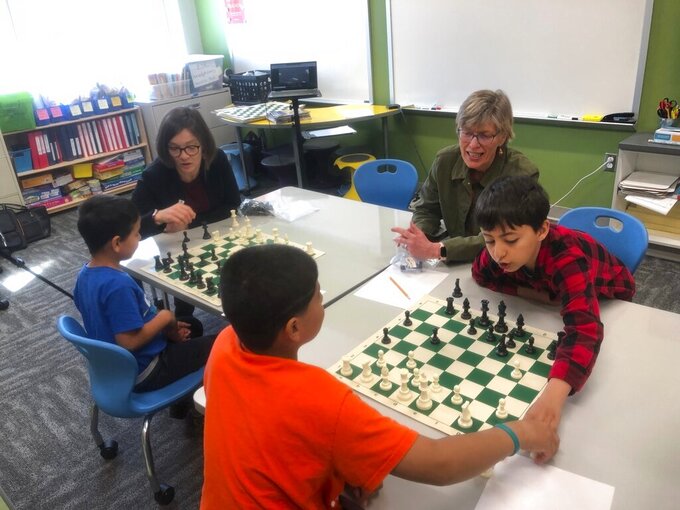 RALEIGH, N.C. (AP) — Some children who escaped the Taliban regime in Afghanistan are now learning to play chess to help them adjust to life in Raleigh.

Stough Elementary School in Raleigh has been the educational home for some of the 1,200 people being relocated from Afghanistan to North Carolina.

On April 1, the school day at Stough for those refugee students included a virtual chess lesson in Farsi from international grandmaster Elshan Moradiabadi and a chance to play the game.

“It’s just been really amazing to watch and see their growth and development since they’ve been here the last few weeks and months,” Stough principal Chris Cox said in an interview. “Obviously in a new place at a new time where things are probably feeling very foreign to them, this is something that really gives them a little bit of familiarity with something that they love as simple as a game of chess.”

Thousands of Afghans who worked for the U.S. government and military have fled the country since the Taliban retook the nation last summer.

Charlotte, Raleigh and Durham are among six cities in North Carolina that are accepting 1,200 refugees from Afghanistan, The News & Observer previously reported.

At any given time, as many as 25 Afghan refugees have attended Stough this school year, according to Cox. He said the school and community have come together to help the new students.

Cindy Linton, Stough’s ESL teacher, mentioned her work with the refugees to her neighbor, Carol Meyer, executive director of the U.S. Chess Federation. What emerged is an effort to help teach the students chess as part of their efforts to learn English.

Meyer reached out to Moradiabadi, a chess grandmaster who now lives in Durham after having emigrated from Iran. In addition to the chess lesson, Meyer provided each student with their own chess set to keep.

“Being an immigrant, I’m one of the fortunate ones,” Moradiabadi said in an interview. “This is the best way to return to immigrants. For me to do something with kids, is not a question.”

Before the Taliban fell in 2001 to U.S. military forces, it had banned chess. Meyer and Moradiabadi say there is fear that the new Taliban government will reinstitute a ban on chess.

“The Taliban wanted people to be devout,” Meyer said in an interview. “Their worldview was shaped by being devout Muslims, and something like chess takes away from being a student of your religion. So they banned chess, music, many, many things.”

The chess knowledge varied among the students, who played against one another, Cox, Linton and Meyer.

“The beautiful thing about chess is that it’s a universal game,” Meyer said. “Despite language barriers in this room, the kids were able to learn how to move the pieces and sit down and play a basic game even though they may not have spoken the same language as the person they were playing against. We think it’s a great unifier.”

What Cox said he’ll fondly remember about that day is the “twinkle in their eyes” as the students played chess.

“It was definitely great to see the kids excited and that’s anything that any of us as public educators would want to see is kids engaged and excited to be here learning each and every day,” Cox said.