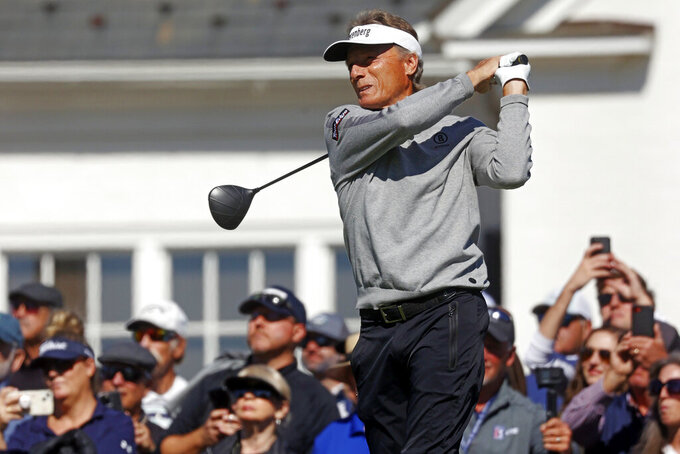 One day it might be a sore wrist. Another, a twinge in the elbow or an ache in the shoulder, maybe knee discomfort.

The balky back never lets him forget the ravages from decades of twisting, sometimes in excruciating fashion — like the four agonizing days of limping and wincing at last year's Charles Schwab Cup Championship.

“The body starts to ache here and there," Langer said. “Different parts of the body, it’s not always the same.”

None of it has slowed him down.

The Schwab Cup concludes this weekend at Phoenix Country Club with two players who can win the PGA Tour Champions season championship.

Kiwi Steven Alker has a chance to complete the transformation from journeyman to champion after winning four times on the over-50 circuit. He has a more than 600,000-point lead over Padraig Harrington, a three-time PGA Tour major winner who has found the sweet spot in his game again.

Harrington needs to win this weekend and Alker to finish outside the top 5 to claim his first Schwab Cup.

Those two are the main event, but plenty of golf fans will be paying attention to the undercard to see what Langer might do next.

Langer is fifth in the season standings and out of the Schwab Cup race, yet has a chance to match one of the PGA Tour Champions greatest records.

The age-defying German showed he's still got plenty of game at 65 last week, winning at the TimberTech Championship in Florida to break his own record for oldest winner on PGA Tour Champions. The win was Langer's 44th, one behind Hale Irwin's career record of 45.

Irwin set the record over a 12-year span, his last victory coming at 61 in 2007. Langer has won at least once every season since joining PGA Tour Champions in 2007 and has at least two victories 10 straight years.

“He’s just always going to be there,” said Jerry Kelly, third in the Schwab Cup standings. “He’s battled some injuries the last couple years and he still won a couple this year. It’s beyond words for me.”

As the clock has winded up, Langer doesn't seem to be winding down yet.

Langer has made shooting his age look easy this year, doing it four times to push his career total to six. He shot a first-round 64 to in the Chubb Classic in February and last week went around Royal Palm Yacht and Country Club in 9-under 63.

“He just keeps going like an energizer. It’s just amazing,” Alker said. “There’s lots to learn from that, too. Just the perseverance, he just keeps going. It was impressive, it really was.”

And expect to see Langer a bit longer.

He may not be as long off the tee as he once one, but is one of the best ball strikers on PGA Tour Champions. He's still an excellent putter, escaping the unsteadiness that can ruin older players' strokes. He also thinks his way around a golf course as well, if not better than anyone.

Until his game or his desire to play it wanes, Langer is going to keep playing. After time off to relax and spending time with his family, the 65-year-old will be on the first tee at Hawaii's Hualalai Country Club in January for the PGA Tour Champions season-opener.

“The holidays are coming up and we all have plans doing this and that and getting some rest,” Langer said. "I’m definitely ready for that, but come January I’ll be looking forward to go to Hualalai. It’s one of my favorite tournaments and places. I’ve done well there and it’s definitely worth the trip."

Langer's had quite a journey to this point. No reason to stop it anytime soon.