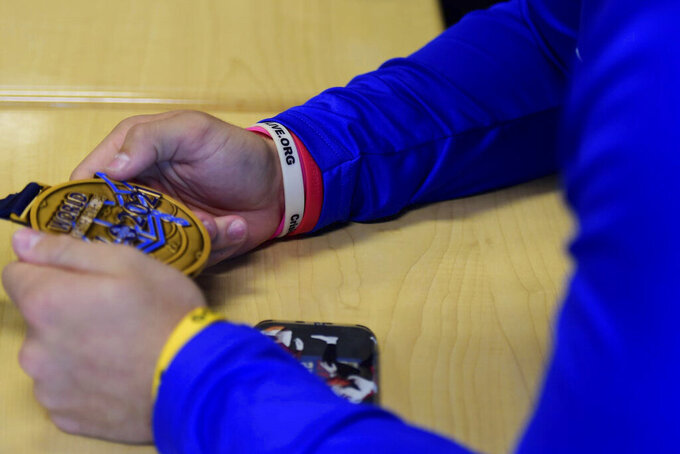 A young girl who wants to try wrestling but is discouraged by those around her — whether it be family, friends or other athletes.

“I think it’s less prevalent in states that have (girls’ wrestling) sanctioned though,” said Gray, a five-time World Champion freestyle wrestler. “When the state has girls’ teams, they are able to see that other girls are wrestling and they go out for the team and stay on the team longer.”

A silver medalist at the 2021 Olympics in Tokyo, Gray spoke to student-athletes at Spring Grove High School on a recent Monday along with fellow women’s Olympic wrestler Helen Maroulis and wrestling coach and Olympic gold medalist Steven Frazier. Maroulis became the first women’s freestyle wrestler from the United States to win an Olympic gold medal in 2016.

The group spoke about a variety of topics including mental health in athletics and how to use sports to achieve life goals.

But they also advocated for the PIAA to sanction girls’ wrestling as an official sport.

While there are currently 32 state high school associations that sanction official girls’ wrestling state championships, the PIAA is not one of them — even though Pennsylvania is considered a hotbed for wrestling.

The PIAA’s reasoning is that its bylaws require 100 schools must sponsor a sport before it can be sanctioned. Many wrestling coaches have long argued that the PIAA’s stance is actually discouraging girls from trying wrestling since it is not considered an official sport.

Gray agreed with that opinion.

“I think it’s the ‘build it and they will come’ model,” she said. “There’s so much passion and history and love for wrestling in Pennsylvania and it’s a shame these young women are not getting to benefit from that. You see little girls light up like, ‘My dad loves wrestling, my brother loves wrestling, my uncle loves it.’ They want to love it too, but the best way to love wrestling is to wrestle.

“This sport needs women to keep it alive and for just the pure equality piece.”

While there have been a number of girls’ wrestlers in York and Adams counties in recent years, Gettysburg is the only YAIAA school to start an official girls’ team. And Gettysburg plans to depart the league for the Mid-Penn next school year.

Tony Miller, who spent 21 years as Spring Grove’s head wrestling coach and still serves as an assistant with the program, helped organize Monday’s event with the Olympians. He said the Rockets don’t currently have any girls’ wrestlers at the varsity level and the issue of not having a separate team has been a tough barrier to overcome.

“We’ve had girls in the past, and maybe the PIAA moves to have a girls’ division at some point to even the playing field,” Miller said. “Right now that’s the difficulty.

“Their message is so powerful. If you told me 25 years ago that this is what (girls’ wrestling) would look like, I probably wouldn’t have believed you. Just look at where these women (Gray and Maroulis) are today and what they’re doing for the sport.”

During a session with female student-athletes at Spring Grove, Gray told a story about going .500 against boys’ during her high school career in Colorado before achieving international success in women’s competitions. Her point was that young girls trying the sport for the first time might not realize how good they are yet.

One Spring Grove female student-athlete said during the session that she previously wrestled but gave up the sport when she didn’t feel encouraged by family and friends. Gray and Maroulis both responded by saying nobody is too old to try something again.

They pointed out that 2021 Olympic gold medalist Tamyra Mensah-Stock — who spoke at Red Lion with fellow Olympian Sarah Hildebrandt Monday — didn’t wrestle until she was 15.

“I don’t think anyone would deny wrestling instills values in young boys so why would we deny that for young girls?,” Maroulis said. “It’s about making champions off the mat and I believe wrestling is one of the greatest sports to do that and raise a generation of leaders. And I believe that includes our women.”

Spring Grove girls’ volleyball players Sarah Czapp and Mylie Ormond were both impressed at how well two Olympians connected with a group of high school athletes.

They admitted to being starstruck when Gray and Maroulis brought up the Rockets volleyball team (currently ranked No. 1 in the state) and gave tips on how to maintain its undefeated season.

“We were like, ‘We know who they are but they actually know who we are,‘” Czapp said.

But the two volleyball players both said they really connected with the comments Gray and Maroulis made on mental health in athletics.

Maroulis told a story about needing to visit a treatment center for trauma and PTSD after coming back from a concussion in 2018. Gray spoke about learning how to deal with failure after a disappointing loss early in a tournament.

Ormond said that resonated with her after struggling with her mental health throughout the coronavirus pandemic.

“I went from being busy five nights a week to nothing to being bored and I didn’t know what to do,” Ormond said. “So it was important to hear their experiences with mental health.”

“I feel it’s my gift to share my vulnerability,” Maroulis said. “I know that what I went through wasn’t in vain. My life and experiences being under a microscope will help kids because a lot of times with mental health, people feel alienated or isolated and they won’t speak up about it because they think they’re the only one.”

Gray said mental health and mental strength should not be considered conflicting ideas. For her, mental toughness is “checking in with myself and being in a frame of mind to be successful” rather than just “pushing through and feeling the burn.”

She added that the bigger point of keeping girls’ involved in sports is not just helping them win games, but helping them achieve leadership roles in the sports industry.

After the session ended, numerous Spring Grove girls’ athletes stuck around longer to share their personal stories and get more advice from the Olympians.

One girl thanked Maroulis and gave her a hug after a long talk with her.

“I think it’s important for them to see that everybody is struggling and you have to build the skillsets to take care of yourself,” Gray said. “That’s not just about sports. It’s about life and relationships and learning how to be a successful human. We can build those resources through sports and the awareness is there, we just need to take one step further and make sure people are utilizing those resources.”