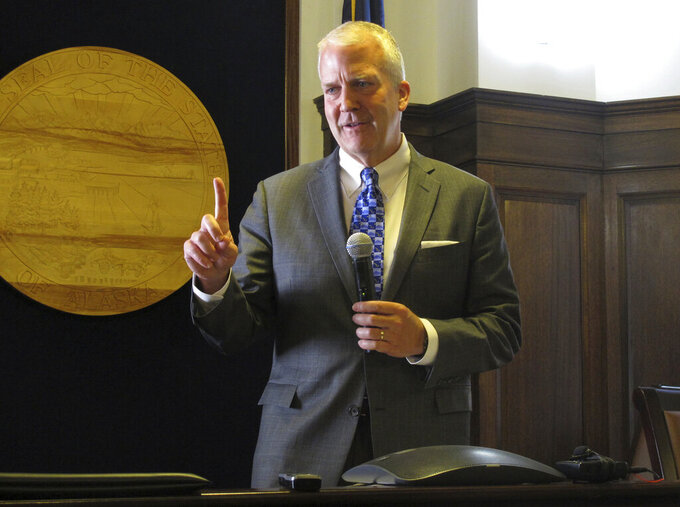 Becky Bohrer, ASSOCIATED PRESS
Alaska U.S. Sen. Dan Sullivan speaks to reporters after addressing a joint session of the Alaska Legislature on Tuesday, April 19, 2022, in Juneau, Alaska. Sullivan said he is supporting fellow Republican, Alaska U.S. Sen. Lisa Murkowski, in her reelection bid this year but said he has not yet endorsed a candidate in Alaska's U.S. House race. (AP Photo/Becky Bohrer)

JUNEAU, Alaska (AP) — Alaska U.S. Sen. Dan Sullivan said he is supporting fellow Republican Sen. Lisa Murkowski in her reelection bid this year and said Tuesday that he has not yet endorsed a candidate in the race for Alaska's only U.S. House seat.

Sullivan said he is “still hurting” over the loss of Republican Rep. Don Young, who at the time of his death last month was seeking reelection to the seat he had held since 1973. Sullivan said that when it comes to a successor to Young, he is interested in “having a fighter like Don Young was” and a Republican.

“I think we have a number of good candidates who fit that bill. But for now, I have not endorsed or backed anybody in that regard," he said.

There will be a special primary and special election to determine who will serve the remainder of Young's term, which ends in January, and the regular primary and general election will decide who is elected to a two-year term, starting in January.

Sullivan made his comments to reporters after giving a speech to a joint session of the Alaska Legislature. Alaska's U.S. senators traditionally address state lawmakers. Murkowski did so in February.

Sullivan said he had come out previously in support of Murkowski and said he is supporting all Republican Senate incumbents.

There is a 50-50 split between members in the Republican and Democratic caucuses in the Senate currently, though Vice President Kamala Harris can cast tie-breaking votes.

Sullivan said he would like Republicans to retake control of both the House and Senate after this fall’s elections.