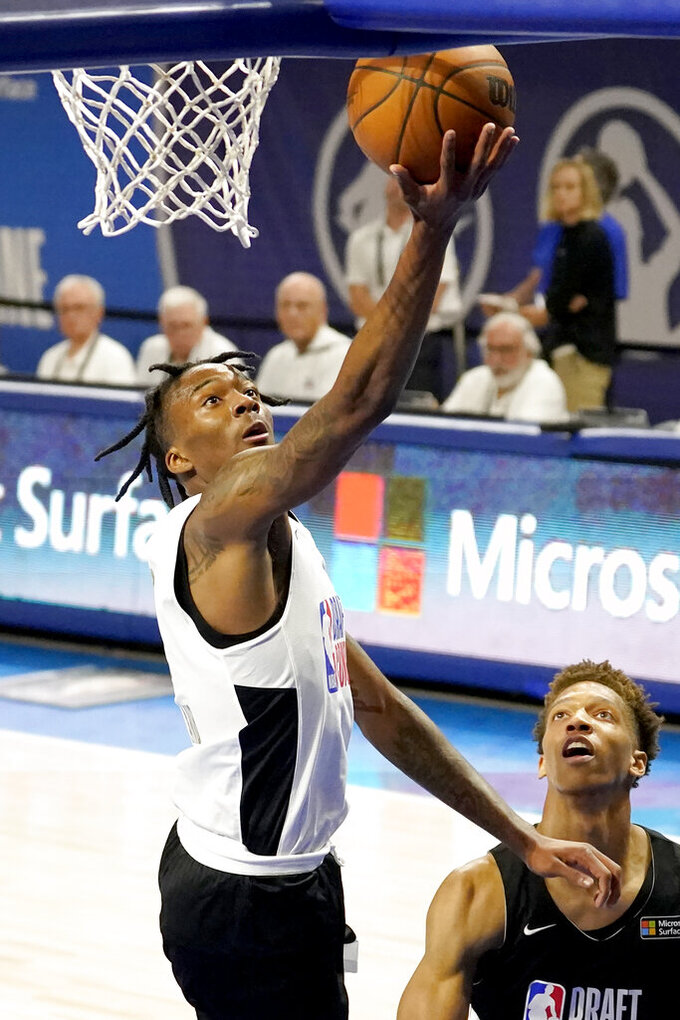 Nah’Shon “Bones” Hyland didn’t get a chance to show what he could do in the NCAA Tournament. If he had, he believes he would have climbed the NBA draft board.

Scouts didn’t get to see Hyland play during March Madness because Virginia Commonwealth had to forfeit its first-round game due to COVID-19 issues within the team, but the Denver Nuggets saw enough to select the guard with the 26th pick of the NBA draft on Thursday night and add some young depth to their backcourt.

“I thought I’d play in March Madness. I had so much more to prove but everything happened for a reason and I’m glad to be here,” Hyland said. “If everything went as it should have went I would have been a top 10 pick for sure. Every team that passed on me I’ll make them pay for sure. Every single last one of them.”

The 6-foot-3, 165-pound Hyland averaged 19.5 points and 4.7 rebounds in 24 games as a sophomore with the Rams last season, which ended with an Atlantic 10 Tournament title but no NCAA Tournament games.

He scored in double figures in all but one of the 24 games last season and had a career-best 30 points in VCU’s 73-68 win over Dayton in the Atlantic 10 Tournament semifinal game in March.

The Nuggets had Hyland on their radar, and with no deals in the works they snapped him up.

“We had a million conversations that mostly led to nothing, but he was a guy throughout the process we had circled,” said Tim Connelly, Denver’s president of basketball operations. “His ability to create his own shot, play on and off the ball, he’s got great length, and his passion for the game and life really appealed to us.”

Hyland fills an immediate need in a Denver backcourt that was thin because of injuries and player movement. He thinks he can make an immediate impact playing with point guard Jamal Murray and NBA MVP Nikola Jokic.

“It’s an up-and-down type of offense, play through Nikola Jokic. He draws a lot of attention,” Hyland said. “I’m a knock-down shooter, I draw so much attention, I can be a playmaker as well. Jamal Murray coming back, I see us being a dominant 1-2. I just see us taking off.”

The Nuggets had championship aspirations after acquiring forward Aaron Gordon from Orlando for guards Gary Harris and R.J. Hampton at the trade deadline. Three weeks later, Murray suffered a torn left ACL in the final minute of a loss at Golden State.

A week later, Will Barton suffered a hamstring injury against the Warriors, and several other injuries to Denver guards impacted the team’s backcourt depth. Denver signed veteran Austin Rivers to a 10-day contract and eventually for the remainder of the season.

Led by Jokic, Michael Porter Jr.’s breakout season and a patchwork backcourt, the Nuggets got by Portland in six games in the first round but were swept by Phoenix in the Western Conference semifinals.

Murray is expected to miss most of the 2021-22 season as he rehabs from his ACL tear. Barton declined his player option and became an unrestricted free agent, which put the murky backcourt situation in further flux.

“We have a bunch of guys that are free that we’d like to bring back. Keep our fingers crossed we’ll bring back as many of those guys as we can,” Connelly said. “Prior to the injuries we were a pretty complete team. We like our core, we like the pulse of the locker room, we like the competitive spirit so we’ll be pretty picky when we look into the type of guys to add to that mix.”