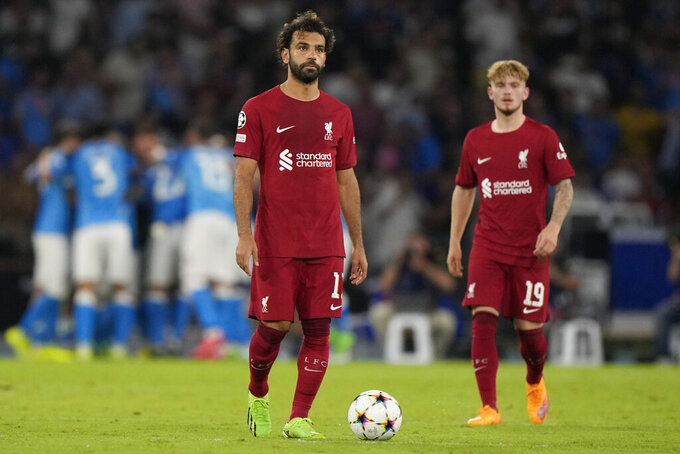 The final whistle had just sounded on Liverpool’s biggest away loss in Europe in more than a half-century when Jurgen Klopp made his way across the field to salute his team’s away fans.

Typically, Klopp’s post-match routine sees him repeatedly punch the air in front of Liverpool’s supporters — and get a guttural roar of approval in response.

This time, he was raising his hands in apology.

Liverpool’s performance in its 4-1 loss at Napoli in the Champions League on Wednesday was so poor — so unlike Liverpool — that it had Klopp scratching his head and wondering how things had gotten this bad, this quickly for a team that was in the final of Europe’s top competition only 3½ months ago.

A midseason reinvention isn’t easy, though. The transfer window has just closed. Klopp says he hasn’t knowingly altered his team’s shape or tactics. And there is still a slew of players either sidelined by injury — notably in central midfield where Jordan Henderson, Naby Keita, Curtis Jones and Alex Oxlade-Chamberlain are out — or far from match sharp after time out of the team because of injuries, like Thiago Alcantara, Diogo Jota and Joel Matip.

The most significant thing for Klopp heading into what is shaping up to be a huge match at home against Wolverhampton in the Premier League on Saturday, it seems, is for his players to get back to playing as a team and to stop being so passive.

“It was the least compact performance I saw for a long, long time,” Klopp said of the Napoli game. “It’s not that we have to reinvent a new kind of football. You always try to improve, but in this moment obviously everybody would be happy if we could just play similar stuff to what we used to play.”

That means Mohamed Salah, the Premier League’s most dangerous attacker for the past five years, perhaps playing a more central role than being stuck out on the right wing and being anonymous at times this season. He was substituted in the 62nd minute against Napoli, even though Liverpool was chasing the game.

It means Fabinho protecting the defense better in a midfield anchorman role that he and Manchester City’s Rodri have mastered in recent years. The Brazil international has not been helped by having a different central midfielder alongside him every game, with the 36-year-old James Milner simply not up to the job against Napoli. Liverpool's counter-pressing, one of its trademark strengths, was non-existent.

It means Trent Alexander-Arnold rediscovering his intensity and work ethic at right back, where he has been a liability at times this season, at least defensively. He was run ragged by Khvicha Kvaratskhelia, Napoli’s emerging star from Georgia.

And what about Virgil van Dijk, the once-commanding center back who has lost his sheen this season, conceding two penalties in seven games after going 150 matches without giving away any. Maybe van Dijk’s form will return once he gets better protection in front of him and a more reliable partner than fourth-choice center back Joe Gomez, who endured a horrible evening at the Stadio Diego Armando Maradona.

“We’re not in the best shape, the best situation, but we’re going to make this right — that’s the confidence I have,” van Dijk said. “We need each other, we need to stick together. Not only us as players but the whole club.”

That might have been a message to Liverpool’s ownership, even if the thought of changing managers is highly improbable at the moment.

Liverpool might have started badly in the Champions League — the club has only once had a bigger away loss in Europe, 5-1 against Ajax in 1966 — and won just twice in its opening six games in the Premier League, but Klopp surely deserves time to turn this around. Last season, the Reds came closer to winning a quadruple of major trophies than any English team in history — winning both domestic cups, finishing one point behind champion Manchester City in the league, and losing the Champions League final to Real Madrid — and Klopp was being widely hailed as one of soccer’s great coaches of his generation.

It didn’t stop a reporter from asking Klopp after the Napoli game whether he was concerned about his job, at the end of a day that had seen Thomas Tuchel fired as Chelsea manager a month into the season.

“Not really but who knows?” Klopp said. “The difference, obviously, they (at Chelsea) are different kind of owners.

“Our owners are rather calm and expect me to sort the situation and not think that someone else should sort it. That’s how they always saw it and on the day when they change their thoughts then they might tell me.”

Thiago returning to the squad and making an impressive second-half cameo against Napoli is massive in terms of restoring some shape and quality on the ball to Liverpool’s midfield. The fit-again Matip also came on the second half and could also start against Wolves. Expect offseason signing Darwin Nunez to be back up front, too.

Liverpool clearly still has the players to be contenders in every competition this season. Klopp just has to shake them out of their early-season torpor.