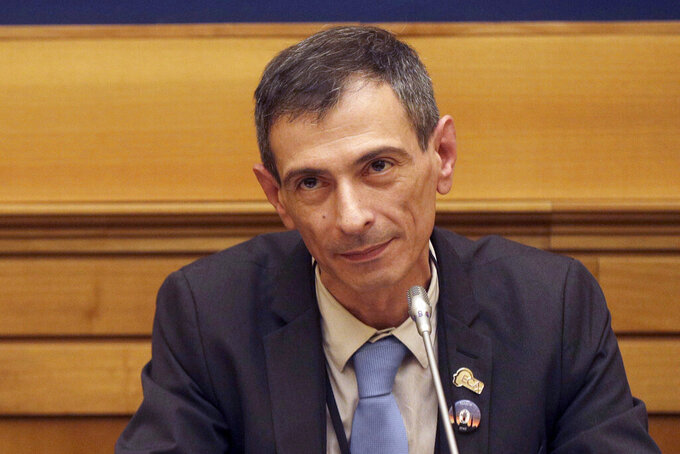 VATICAN CITY (AP) — Italy’s Catholic bishops provided their first accounting of clergy sexual abuse and revealed Thursday that more than 600 cases from Italy were on file at the Vatican since 2000.

The report of the Italian bishops' conference, which only covered complaints that local Italian church authorities had received over the last two years, did not mention the hundreds of cases. It identified 89 presumed victims and some 68 people accused.

But responding to a reporter's question during a press conference about the report, Monsignor Giuseppe Baturi revealed that the bishops' conference was researching 613 files held at the Vatican's Dicastery for the Doctrine of the Faith.

The Vatican in 2001 required dioceses around the world to send all their credible reports of abuse to the dicastery for processing. The Vatican had felt compelled to act after decades in which bishops and religious superiors moved predator priests around from diocese to diocese rather than punishing them or reporting them to police.

Baturi, the secretary-general of the bishops' conference, noted that some of the 613 cases might have been archived and some might contain multiple victims of a serial predator.

“We have to understand how many victims, what their profile is, who are those responsible,” he said.

The almost haphazard revelation underscored that the initial report by the bishops' conference was not intended to provide an accurate or historic look at the clergy abuse problem in Italy. The country's bishops never authorized such research despite demands from survivors for a full accounting, which some other Catholic Churches in Europe have published.

Instead, the Italian bishops limited the scope of their report to evaluate the work of “listening centers” that were set up in dioceses since 2019 to receive complaints from victims. Organizers said during a news conference Thursday that the report provided a “first photograph” of the problem and the bishops planned to release annual reports from now on.

The report said 89 people had made reports in the past two years and identified 68 abusers. It found most victims were between ages 15-18 when the abuse took place, though 16 were adults whom the church considered “vulnerable.” Most of the claims involved inappropriate language or behavior and touching.

The numbers paled in comparison to the tally of known cases kept by Italy’s main survivors’ group, Rete L’Abuso, which estimates some 1 million victims in the overwhelmingly Roman Catholic country. The group has identified some 178 accused priests, 165 priests who were convicted by Italian law enforcement and some 218 new cases.

Nevertheless, the numbers reported by the Italian bishops even in these two past years were significant, said Francesco Zanardi, the head of Rete l’Abuso.

“If in two years they received 89 complaints, that means the problem is there and it’s big,” he said in a telephone interview.

Zanardi noted that an unusually high percentage of the accused were lay church workers – some 34%, compared to the 66% of priests or religious brothers. He noted that lay abusers often find it easier to access potential victims in Italy’s vast church-run volunteer programs since background checks are less stringent.

Monsignor Lorenzo Ghizzoni, who is head of the Italian church’s national child protection service, said the numbers in the report were significant given the reporting period covered a time when church activities were either shuttered or reduced due to COVID-19.

“These are just a few, but they’re a lot,” especially for a system to receive complaints that had just been started, Ghizzoni said.

From the start, the scope of the Italian report was far more limited than the approach taken by the Catholic hierarchy in many European countries to try to respond to clamoring for accountability about clergy sexual abuse.

When he announced the planned report in May, the head of the Italian bishops' conference, Cardinal Matteo Zuppi, insisted the study's scope and the compressed, six-month time frame for its release would enable researchers to provide a more “accurate and accountable” tally.

Whether by government mandate, parliamentary investigation or church initiation, such reports in Ireland, Belgium, the Netherlands, Germany, Portugal and France identified systematic problems that allowed thousands of children to be abused by Catholic priests.

In France, a panel of independent experts estimated that 330,000 children were sexually abused over 70 years by some 3,000 priests and church personnel, and that the crimes were covered up “systematically” by the church hierarchy. That report, and a spate of revelations about high-ranking abusers, has sparked a crisis of confidence in the French Catholic Church.

Zanardi alleged the Italian report was clearly an attempt to “minimize” and cover up the scope of clergy sex abuse in Italy. “It’s shameful. It’s partial and you don’t really know what it’s for,” he said.