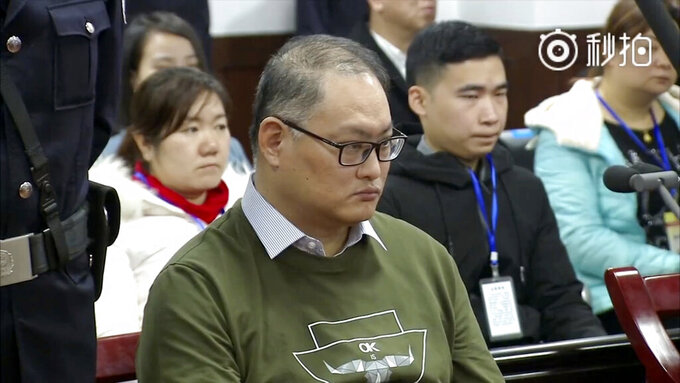 TAIPEI, Taiwan (AP) — A Taiwanese human rights activist who served five years in jail in China said that international pressure and the tireless advocacy by his wife worked to ensure his safe return to Taiwan.

“I know that my life's safety and security was defended by many people, thanks to everyone, I have never felt abandoned or alone,” Lee Ming-che said at a press conference Tuesday in his first public appearance since being released from prison.

Lee Ming-che was arrested by Chinese authorities in 2017 and charged with subversion of state power. His arrest was China’s first criminal prosecution of a nonprofit worker since Beijing passed a law tightening controls over foreign non-governmental organizations in 2016.

His arrest marked a turning point as China showed that it would not hesitate to prosecute Taiwanese individuals for political activism, regardless of the harm it would bring to cross-Strait relations. It also raised public awareness in Taiwan of the tangible consequences of China's authoritarian rule on individuals as relations between Taiwan and China worsened with the election of President Tsai Ing-wen.

China claims Taiwan is a part of its national territory and has not ruled out force to bring the island under its rule. Taiwan is, in practice, self-ruled.

Lee had given online lectures on Taiwan’s democratization and managed a fund for families of political prisoners in China that some friends had set up.

“I did what I could do, using my credit card to buy some books," he said, which he would send to friends in China. He would also give donations to the families of political prisoners. “This is not to interfere with the country's internal affairs. All of this was simply a way of humanitarian caring.”

Lee is the son of parents who were both born in China and had come to Taiwan with the ruling Nationalist Party. He had always thought of himself as a Chinese person growing up. That changed in high school with a history teacher who taught the students to learn about local history.

Instead of focusing on the Yangtze or the Yellow River, the two major rivers in China, the history teacher showed them documentaries about Taiwanese local history. Lee said he learned to appreciate what was around him.

That message was hammered in during his time in China, where he realized that he was a foreigner. Lee now identifies himself as Taiwanese, saying that his ethnic identity, as a Chinese person, is separate from his national, political identity as a person born in Taiwan.

“Real revolution, as evidenced by history, must come from the land itself,” Lee said. “I know that how China democratizes and comes to value human rights, that’s the Chinese people’s responsibility and work.”

While Lee was able to come home, another prisoner, Lee Meng-chu, remains trapped in China. Lee Meng-chu has been accused of being a spy by Chinese authorities and is now serving the two years as part of his sentence which deprived him of “political rights.”

Meng-chu had been in Hong Kong in 2019, during the massive anti-government protests that rocked the city, according to the semi-official Central News Agency. He disappeared after crossing the border into Shenzhen.

It’s uncertain how many Taiwanese are being held in Chinese prisons, as many families have chosen to remain quiet in the hopes of getting their loved ones’ release.

This stands in contrast with Lee, the human rights activist's case. In the last five years, Lee’s wife, Ching-yu worked with local nonprofit organizations to raise awareness about her husband’s case. She also sought help from foreign democratic governments from the United States to the United Kingdom. Lee gave interviews in the press about whether she could send letters to her husband while in jail and how his health was.

That continued effort, both said, paid off.

“International support can truly have a concrete change on the treatment of a political prisoner in China,” said Lee Ching-yu.