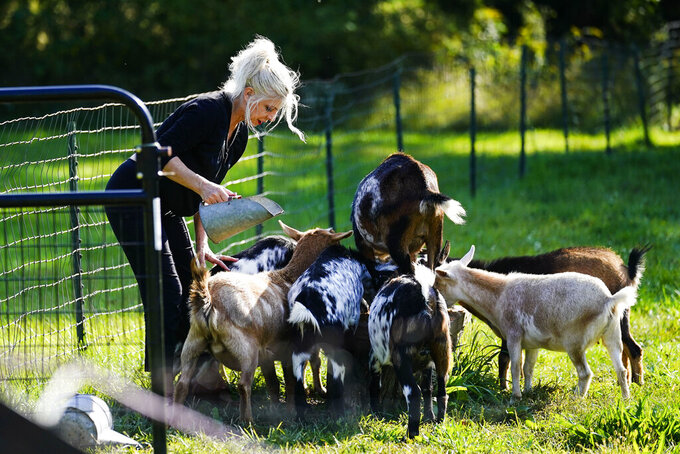 Matt Rourke, ASSOCIATED PRESS
Jacqueline Evans, whose property in Hunterdon County, New Jersey, stands along the proposed pathway for the PennEast Pipeline, feeds her goats at her home in Delaware Township, N.J., Monday, Sept. 27, 2021. Construction of a nearly 120-mile-long (193 kilometer) proposed natural gas pipeline from northeastern Pennsylvania to central New Jersey will not go forward, the group behind the project said Monday. PennEast Pipeline Company, which won a recent legal battle against New Jersey at the Supreme Court, nonetheless said the state has failed to provide certain permits and is putting the project on ice. (AP Photo/Matt Rourke)

PennEast Pipeline Company, which won a recent legal battle against New Jersey at the Supreme Court, nonetheless said the state has failed to provide certain permits and is putting the project on ice.

The decision is the latest swing in a long-running effort to extract natural gas from the Marcellus Shale region of Pennsylvania. It's also a major win for environmental groups who opposed the project, arguing it would cut a scar across the landscape, threaten wildlife and contribute the use of fossil fuels.

“This one was bad. It would have wrecked our state and as long as I'm here that’s not gonna happen," Murphy said.

Pipeline opponents held a remote video conference to take a victory lap of sorts. The pipeline company's decision was emotional for some.

“It's relief,” said Terese Buchanan, a resident along the proposed route and long-time opponent.

Jacqueline Evans, whose property in Hunterdon County, New Jersey, stands along the proposed pathway, described a draining process of opposing the pipeline. She said she found surveyors on her land without permission and watched as her children struggled with worry over what would happen to wildlife and the land.

“All of a sudden a place that is supposed to feel safe to you feels threatened," she said. “The stress has been unbelievable," she said.

It's unclear whether PennEast will pursue the project again if circumstances change.

Groups backing the project lamented its apparent demise, saying it would have provided affordable energy to residents.

“If we cannot get that gas to where it is needed because of regulatory and legal challenges by those who are content to impose higher energy bills on working families, we are effectively abandoning this strategic American asset," said Amy Andryszak, president and chief executive officer of the Interstate Natural Gas Association of America, which backed the pipeline.

In Pennsylvania, trade associations, labor unions and the huge natural gas industry have pushed hard for pipeline projects to help get gas from the vast Marcellus Shale formation to new markets. They say that such avenues will help boost wellhead prices that are artificially low because of such constraints.

Canceling the project will mean ratepayers pay more for gas and electricity, the economy will lose thousands of construction jobs and the Northeast or mid-Atlantic states will be forced to rely on imported fuels, said Gene Barr, the president and CEO of the Pennsylvania Chamber of Business and Industry.

Regulated utilities in New Jersey have told the state’s public service commission that they may not have enough gas to meet winter demand, while natural gas is an important fuel for the manufacturing sector, Barr said.

PennEast, a company made up of five different energy firms, won federal and Pennsylvania permitting approvals including a key Federal Energy Regulatory Commission certificate that could allow the firm to use eminent domain to acquire land.

In June, the U.S. Supreme Court said that companies building interstate pipelines can obtain the land they need even in the face of state opposition, once their projects have been given the greenlight by the Federal Energy Regulatory Commission.

Both the Trump and Biden administrations had supported PennEast. Nineteen states had urged the Supreme Court to rule the other way and side with New Jersey.

New Jersey had failed to issue a water quality certification and other wetlands permits under the Clean Water Act for that state’s portion of the project, according to PennEast.

PennEast’s application with federal regulators goes back to 2015, though it began pushing for the project in 2014. The company argued the project would bring jobs and lower-cost natural gas to the region.