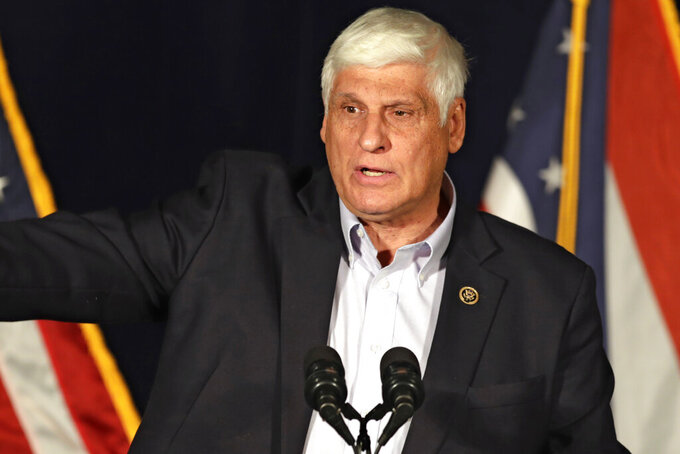 The six-term congressman from Amish Country exits a primary race in northeast Ohio that, under new temporary maps, would have put him up against Trump-backed Republican Max Miller.

Miller was initially recruited to defeat U.S. Rep. Anthony Gonzalez, who joined a handful of fellow Republicans who voted in favor of the former Republican president's impeachment. Gonzalez has since retired.

In a statement, Gibbs said “almost 90% of the electorate” in the new 7th Congressional District where he would be required to run is new, with nearly two-thirds drawn in from another district “foreign to any expectations or connection” to the district he now serves.

Trump weighed in to congratulate Gibbs on “a wonderful and accomplished career.” He called Gibbs a strong ally of his America First agenda and the fight against “the Radical Left.”

“Thank you for your service, Bob—a job well done!” Trump said in a statement.

Calling the decision to retire difficult, Gibbs called it irresponsible “to effectively confirm the congressional map for this election cycle seven days before voting begins.”

He appeared to be referencing a March 30 procedural ruling by the Ohio Supreme Court, which extended the briefing schedule for the legal challenge to Ohio's congressional map well past this year's primary.

However, congressional districts for 2022 elections had actually been set since March 2. That was when Republican Secretary of State Frank LaRose, the state's elections chief, ordered county boards of elections to reflect the Ohio Redistricting Commission's second congressional map on ballots.

Gibbs said he believes Ohio's prospects are bright “despite the circus redistricting has become.”

“These long, drawn-out processes, in which the Ohio Supreme Court can take weeks and months to deliberate while demanding responses and filings from litigants within days, is detrimental to the state and does not serve the people of Ohio,” he said.

The high court's bipartisan majority, comprising Republican Chief Justice Maureen O'Connor and three Democrats, has been engaged in a protracted back-and-forth with the Republican-controlled redistricting commission for months.

In response to lawsuits brought by voting rights and Democratic groups, justices have tossed four plans and counting for legislative and congressional lines, declaring each an unconstitutional gerrymander that unduly favor Republicans.

Their faceoff continues to escalate.

As justices consider a request to hold mapmakers in contempt for their repeated failure to craft lines that meet constitutional muster, Republicans who control the state Legislature are thinking hard about bringing impeachment proceedings against O'Connor.

Gibbs is the 17th House Republican to say he won’t seek reelection, compared to 30 Democrats. His term runs through January 2023.