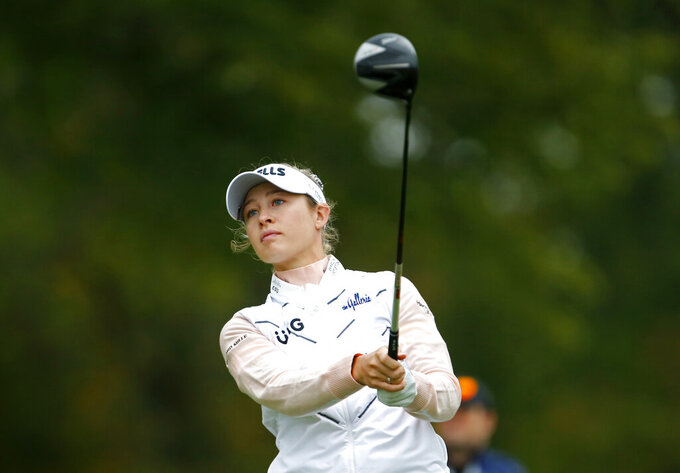 When it comes to playing in the Masters, all Harry Higgs knows is waiting.

The first part took place at Kiawah Island in May, when Higgs holed a 6-foot par putt to cap off a bogey-free 70 in the final round of the PGA Championship. And then he had to wait to see if that would allow him to finish among the top four and secure an invitation to Augusta National.

Kevin Streelman helped by making bogey on the 17, dropping him one shot behind Higgs and others.

“All we needed to do was avoid him holing it (from the fairway) because then I go to fifth,” Higgs said. “And of course, I’ve got some bones to pick on what shots they show and when. Streelman had hit his second, but we don’t know where it is. Louis Oosthuizen hit his shot to 15 feet. And on the corner of the TV we could see a ball on the far right of the green. And we just started screaming and yelling and high-fives and hugs.”

And now the real wait: The invitation in the mail, which typically does not happen until the holiday season.

Higgs can focus on the task at hand, such as playing the Houston Open this week, his fifth start of the new season.

“When I’m home, it’s constant. It’s like, this is awesome. This is the pinnacle. This is what I always wanted to do,” he said. “It’s not on the top of mind all the time. But when I’m asked, or I’m going through details of booking a house, or someone asking for tickets — which aggravates the living hell out of me, but it reminds me that I am going to play in the Masters.”

While at SMU, he played the Augusta State tournament twice and was allowed in for the practice round on Monday. But he has never played Augusta National, and he won’t be waiting until April.

“My understanding is once I get my invite, I can go myself and play as much as I like,” Higgs said. “They say ‘as much as you like’ — I’m not going to be that guy that goes 20 times and have them tell me I can’t show up anymore. But if I play with a member, I can bring my brother, my dad, do a trip with my coach, guys back in Dallas.”

How much is too much? It’s one thing to have an invitation, another to be that guy who never leaves.

“I’ll find a way to cleverly ask,” Higgs said. “I’m guessing if I go four times before now and April, that’s fine. And from what I’ve heard, you enjoy a round with your dad, with your brother, you set eyes on it. But it’s not going to matter. Because by the time it starts, they’ve got their thing they do and it’s vastly different, from what I’ve heard.”

Nelly Korda and Jin Young Ko are neck and neck for the Race to CME Globe, victories and the women’s world ranking heading into the final two weeks of the LPGA Tour season.

By virtue of points falling off and the two-year rolling formula, Korda returned to No. 1 in the world this week. They also are Nos. 1 and 2 in the Vare Trophy for the lowest scoring average, though neither can win the award because they won’t reach the minimum 70 rounds.

Even though it looks to be quite the battle at the top, the Pelican’s Women’s Championship will be only the second time they face each other since Korda won the gold medal at the Tokyo Olympics on Aug. 7 (Ko tied for ninth) for her fourth victory of the year.

They have played in the same tournament 11 times, including the Olympics.

The Cognizant Founders Cup last month is the only tournament Ko has won when Korda was in the field. Ko played in all four events Korda won. Korda has had the better finish in seven of those 11 tournaments, including three majors.

Zack Fischer already had Korn Ferry Tour status. A 12-foot birdie putt on the final hole of Q-school gave him a lot more.

Fischer’s birdie made him the medalist by one shot. Not only was that worth $50,000, it gave him full status for 2022. The next nine players are guaranteed 12 starts next year before a series of reshuffles to determine priority getting into the field. The other 39 players who finished among the top 40 and ties are guaranteed eight starts.

It was the second time the 32-year-old Fischer was medalist in the Korn Ferry Tour Q-school, having also won in 2013.

This will be his fifth full season on the Korn Ferry Tour. He has yet to earn a full PGA Tour card, though full status gives him another opportunity next year.

Scott Verplank lead a class of five who will be inducted into the Oklahoma Golf Hall of Fame on Nov. 21.

Verplank won the Western Open as an amateur and the NCAA title while at Oklahoma State, and then overcame diabetes to win four more times on the PGA Tour and play on two Ryder Cup teams.

Also to be inducted are David and Danny Edwards, brothers who combined for nine PGA Tour victories. They grew up playing at Kickingbird Golf Course in Edmond, Oklahoma, and that will be a big part of the induction. The other inductees are architect Floyd Farley, who designed the public course north of Oklahoma City, and longtime pro Art Proctor, the first head pro at Kickingbird who taught the Edwards brothers.

Sony Corp. has extended its title sponsorship on the PGA Tour for another four years through 2026. The Sony Open has been played under the same sponsorship since 1999. ... Lexi Thompson is making her fifth appearance in the QBE Shootout in December with a fourth partner, this time Bubba Watson. They have combined for the most worldwide wins (37) of any of the 16 two-player teams. ... Sam Burns will be in the Hero World Challenge in the Bahamas after Masters champion Hideki Matsuyama decided not to play. ... The Women's Amateur Asia-Pacific starts Wednesday, with the winner earning spots in the Women's British Open, the Evian Championship, the Hana Bank Championship and the Augusta National Women's Amateur. ... The French Open returns to the European Tour schedule next year, to be held Sept. 22-25, the same week the Ryder Cup was played at Le Golf National in 2018. The tournament was canceled the last two years because of the pandemic.

Steven Alker made $841,849 from three full PGA Tour seasons and a total of 86 tournaments. He has earned $896,207 in his nine tournaments on the PGA Tour Champions this year.

“The freedom to be my own boss is nice.” — Brooks Koepka.