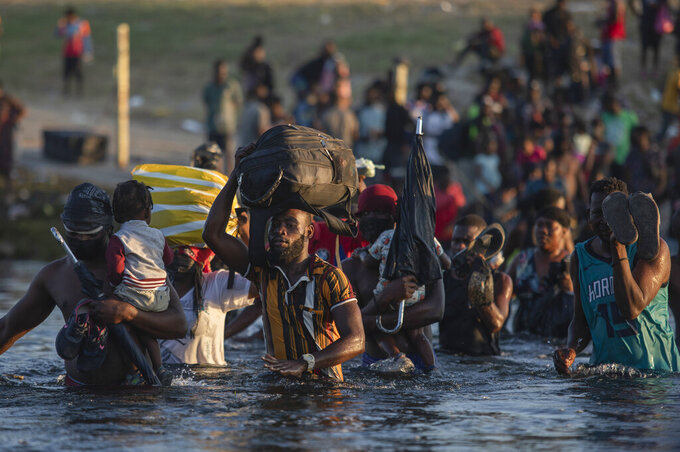 Felix Marquez, ASSOCIATED PRESS
Migrants, many from Haiti, wade across the Rio Grande river from Del Rio, Texas, to return to Ciudad Acuña, Mexico, Monday, Sept. 20, 2021, to avoid deportation from the U.S. The U.S. is flying Haitians camped in a Texas border town back to their homeland and blocking others from crossing the border from Mexico. (AP Photo/Felix Marquez)

WASHINGTON (AP) — The Biden administration is relying on a contested Trump-era policy as it disperses thousands of Haitian migrants along the U.S.-Mexico border in and around the small South Texas city of Del Rio.

Much to the dismay of migrant advocates, the Department of Homeland Security is invoking the public health law known as Title 42 to quickly take Haitians into custody and fly them back to their troubled homeland, denying them an opportunity to make a claim to stay in the U.S. by seeking asylum.

DHS Secretary Alejandro Mayorkas said Monday that most of the Haitians removed from the Del Rio encampment have been expelled under the authority of Title 42, angering human rights activists and others who had hoped to see the policy ended by an administration that has otherwise sought to reverse much of Trump’s immigration agenda.

A look at the law and the controversy that surrounds it:

WHAT IS TITLE 42 AND WHY ARE WE TALKING ABOUT IT NOW?

Title 42 of the Public Health Service Act gives federal health officials powers during a pandemic to take extraordinary measures to limit transmission of an infectious disease.

It’s not a new power. The authority has, in various forms, been around since 1893. The Trump administration invoked it in March 2020 to sweeping effect, prohibiting entry by virtually anyone from Mexico and Canada and essentially sealing the northern and southern borders.

It was ostensibly intended to prevent the spread of COVID-19 in cramped Border Patrol stations or in facilities run by Immigration and Customs and Enforcement. Critics of the policy see it as a thinly disguised measure to thwart immigration, noting it deprives people of the right to claim asylum or seek to remain in the U.S. through some other legal avenue.

Former federal health officials told The Associated Press last year that the Trump administration overruled government scientists who said there was no evidence that invoking Title 42 would slow the coronavirus. Nevertheless, the public health order remains in place and hundreds of thousands of people have been expelled under its authority.

WHAT HAPPENED UNDER BIDEN?

President Joe Biden has been unwinding many Trump policies targeting both legal and illegal immigration. But the new administration has kept Title 42 in place as COVID-19 continues to rage around the world and amid an increase in migrants seeking to enter the U.S. at the southwest border, due in part to the economic upheaval of the pandemic and overall conditions in Central America, Haiti and elsewhere.

The Biden administration halted the Trump-era practice of expelling unaccompanied children into Mexico, and has allowed some migrants traveling with their children to stay in the U.S. to pursue asylum claims or other legal residency. But it has expelled tens of thousands of adults and families under Title 42, insisting it's a public health measure and not an immigration policy.

The American Civil Liberties Union and others filed a class-action lawsuit seeking to end the expulsions of families. They seemed to score a victory last week, when a federal judge in Washington said the use of Title 42 in this manner was likely illegal. He said he would order the administration to stop expelling families in two weeks. But within hours the administration said it would appeal.

“The Biden administration claims it wants to distance itself from the Trump administration’s inhumane asylum policies," said ACLU attorney Lee Gelernt. "Yet it has retained the most extreme of all the policies, the Title 42 policy that is literally sending families into the hands of persecutors and cartels."

In recent days, thousands of migrants from Haiti have sought to enter the U.S. at the Del Rio border crossing. Haitians have been trying to get into the country over the Southwest border for years but it's not clear what prompted so many to gather at this one spot at this particular moment.

In May, the Biden administration granted temporary protected status for Haitians who were already in the United States, but that doesn't apply to the people massing near Del Rio.

As an increasingly squalid camp emerged under a bridge on the U.S. side of the border, authorities began the process of detaining the migrants and then expelling them. Mayorkas said some would be subject to “expedited removal” in which the U.S. quickly deports low-level immigration offenders. But most he said would be expelled under Title 42, which he was careful to portray as a public health measure.

“Irregular migration poses a significant threat to the health and welfare of border communities and to the lives of the migrants themselves and should not be attempted,” he said.