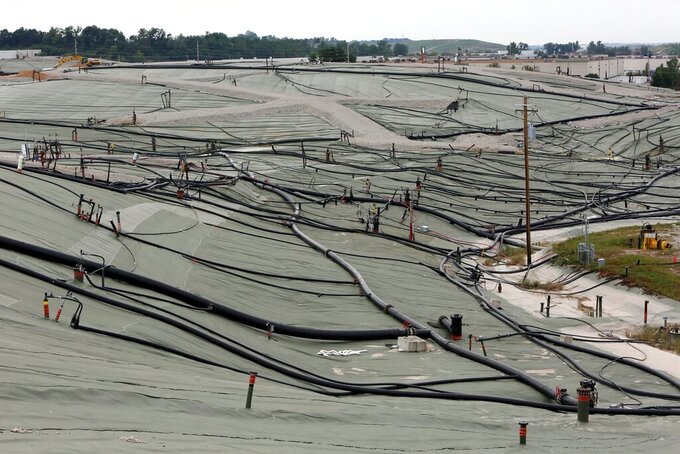 Huy Mach, ASSOCIATED PRESS
FILE - A membrane covers hundreds of feet of garbage and various pipes that direct leachate to a treatment plant at the Bridgeton Landfill on Aug. 28, 2015, in Bridgeton, Mo. Missouri’s health department on Thursday, Aug. 11, 2022, announced findings of a lengthy examination of the landfill in suburban St. Louis, determining that the odor emitting from the landfill has created no significant health risk for people who live near it. The landfill has been a source of concern not only because of the smell, but because of underground smoldering that is within several hundred yards of buried nuclear waste. (Huy Mach/St. Louis Post-Dispatch via AP, File)

Missouri’s health department on Thursday announced findings of a lengthy examination of the troubled Bridgeton Landfill in suburban St. Louis, determining that the foul odor emitting from the landfill created health problems but did not increase the risk of cancer.

The finding of the yearslong investigation by the Missouri Department of Health and Senior Services was validation for people who live near the landfill in northwestern St. Louis County, said Dawn Chapman, co-founder of the activist group Just Moms STL.

“We knew we were facing physical symptoms on a day-to-day basis from exposure to the odors,” Chapman said. “We knew it could exacerbate illnesses because that's what we were seeing.”

The landfill has been a source of concern for well over a decade for multiple reasons. Uranium refined in St. Louis as part of the Manhattan Project, the World War II-era program that produced the first nuclear weapons, was illegally dumped at the adjacent West Lake Landfill in 1973.

Meanwhile, a smolder was discovered underground in 2010 at Bridgeton Landfill, just a few hundred yards away, creating worry about what could happen if the smoldering reaches the nuclear waste. The cause of the smolder remains unknown, but the resulting odor was so pungent that many nearby residents complained of illness and were often forced to stay inside.

Bridgeton Landfill has spent millions of dollars to mitigate the odor, which has decreased significantly in recent years.

The state health department, in its “final health consultation document,” determined that before the odor-reducing actions, breathing sulfur-based compounds “may have aggravated existing respiratory and cardiopulmonary conditions,” and caused headaches, nausea and fatigue. Children, the elderly and those with chronic respiratory conditions such as asthma faced the greatest risk.

Chapman recalled a day in the summer of 2013 when she took her kids to a nearby Target store.

“The odor was so strong it came inside the building,” she said. “As we were checking out everybody was gagging. People were puking in the parking lot and moms were trying to put their groceries away with their noses bleeding.”

The odor was so bad that then-Attorney General Chris Koster filed a lawsuit in 2013. The suit was settled in 2018 when the current and former landfill owners agreed to pay $16 million.

A spokesman for the Environmental Protection Agency declined comment on the Missouri report.

The EPA’s Superfund project to address the nuclear waste was announced in 2018, but has been delayed while the agency refines its cleanup plan, initially estimated to cost $205 million. The agency has not issued a new timeline.

The landfill’s owner will shoulder the cost along with other “responsible parties,” which include the U.S. Department of Energy and Exelon Corp. of Chicago, whose subsidiary once owned uranium processor Cotter Corp.