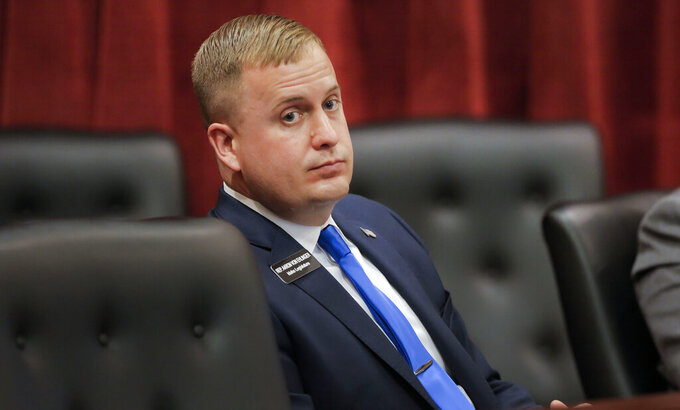 Darin Oswald, ASSOCIATED PRESS
FILE - In this April 28, 2021 file photo, State Rep. Aaron von Ehlinger, R-Lewiston, listens during a hearing at the Idaho Statehouse in Boise, Idaho. The former Idaho state lawmaker charged with rape in September 2021 has been arrested in Georgia. Von Ehlinger is being held without bond in the Clayton County, Georgia jail on a "fugitive from justice" charge. He was arrested Saturday, Sept. 25, 2021, in connection with the Idaho warrant. (Darin Oswald/Idaho Statesman via AP,File)/Idaho Statesman via AP)

BOISE, Idaho (AP) — A former Idaho state lawmaker charged with rape earlier this month has been arrested in Georgia.

Aaron von Ehlinger is being held without bond in the Clayton County, Georgia jail on a “fugitive from justice” charge, according to court records. He was arrested Saturday in connection with the Idaho warrant, which charges him with rape and sexual penetration with a foreign object.

Von Ehlinger was a Republican state representative from Lewiston, Idaho when a 19-year-old legislative intern reported that he brought her to his apartment under false pretenses and raped her. At the time, von Ehlinger denied all wrongdoing and maintained he had consensual sexual contact with the woman. The AP doesn’t name people who report sexual assault unless they agree to be publicly named.

A legislative ethics committee, however, found that von Ehlinger engaged in “behavior unbecoming” and said they would support a vote to remove him from the Idaho Statehouse. Von Ehlinger resigned from office before the vote was held.

The Idaho warrant, issued Sept. 9, would have allowed him to be freed after his arrest as long as he posted bond. But von Ehlinger did not turn himself in over the subsequent two weeks.

The details surrounding von Ehlinger's arrest in Georgia were not immediately released. Von Ehlinger made his first court appearance on the fugitive from justice charge Monday, when a judge denied him bond.

Online court records do not show if von Ehlinger has obtained an attorney, and he couldn’t be reached for comment.

If he is convicted of the charges in Idaho, von Ehlinger could face up to life in prison and be required to register as a sex offender.