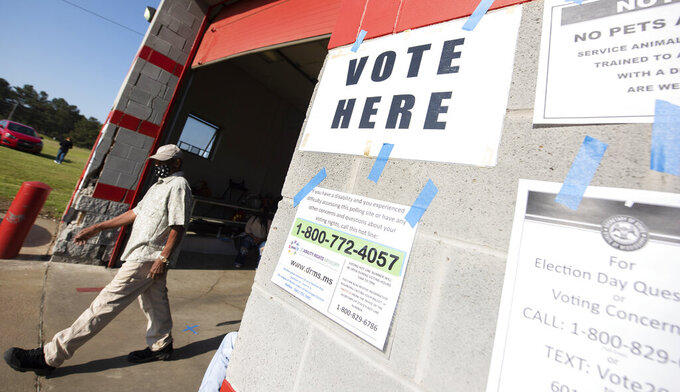 JACKSON, Miss. (AP) — The mayors of Mississippi's two largest cities easily won party primaries Tuesday and will advance to the general election as they seek another four years in office.

Both face opposition in the June 8 general election.

Security officer Jason Wells defeated one candidate in Jackson's Republican primary, the Clarion Ledger reported. Lumumba and Wells will face three independents in the general election: Shafeqah Lodree, Charlotte Reeves and Les Tannehill. Lumumba is seeking a second term in the city of about 161,000 residents. Jackson has a long history of electing Democrats as mayor.

Hewes is seeking a third term as mayor of Gulfport, which has a population of nearly 72,000. He will face Democrat Howard Page, a community organizer and policy analyst, in the general election, the Sun Herald reported. Hewes previously served 20 years in the state Senate and unsuccessfully sought the Republican nomination for lieutenant governor in 2011.

Many Mississippi cities are electing mayors and members of city councils or boards of aldermen this year. Party primary runoffs, where needed, will be April 27. The general election is June 8, and the new term begins July 1.

In Meridian, second-term Mayor Percy Bland is headed to a Democratic primary runoff with former Lauderdale County supervisor Jimmie Smith, WTOK-TV reported. The Democratic nominee will face Republican Robert J. Ray, who unsuccessfully sought the Democratic nomination for governor in 2019, and independent Weston Lindemann, who is currently a city councilman.

The coastal city of Moss Point will have a runoff to determine the Democratic nominee for the open mayor's seat. Businessman and education leader Billy Knight and state Rep. Jeramey Anderson advanced from a field of six candidates Tuesday. News outlets reported that the Democratic nominee will face independent Howard Bailey and Republican Richard McBride in the general election. Democrat Mario King resigned as Moss Point mayor after pleading guilty to a federal fraud charge in February. He had already said he would not seek a second term.