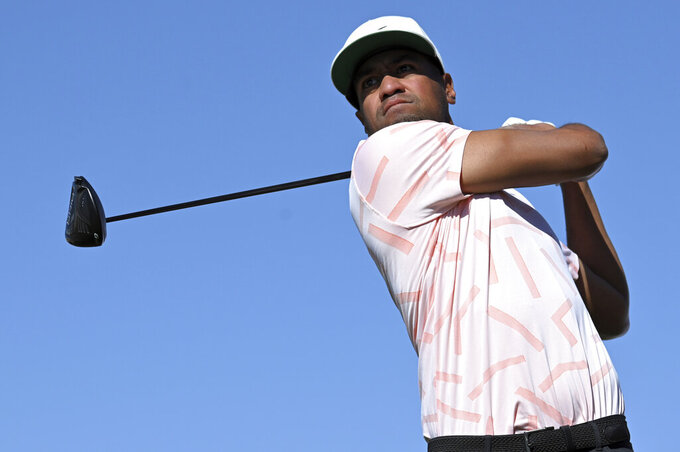 Notes: Mayakoba has become enough of a destination that it features the strongest field so far among full-field events. It has its strongest field since it began in 2007. ... Among those from the top 15 in the world are Justin Thomas, Tony Finau and Brooks Koepka. ... The field includes 10 players from the Ryder Cup, six of them from Europe, which includes Shane Lowry and Ian Poulter. ... This is the third consecutive PGA Tour event played outside the United States, following events in Japan and Bermuda. ... Foreign-born players have won the last four events on the PGA Tour schedule. ... The last four tournaments at Mayakoba have been decided by one shot. ... Matt Kuchar is in the field. He holds the tournament record at 22-under 262. ... Justin Thomas tied for 12th last year. ... Lee Westwood, Daniel Berger, Patrick Cantlay and Bryson DeChambeau are the only Ryder Cup players who have not played since Whistling Straits.

Notes: The top 54 players in the Charles Schwab Cup qualified for the second of three postseason events. The top 36 after the TimberTech Championship will advance to the Charles Schwab Cup Championship next week in Phoenix. ... Bernhard Langer's victory in the first postseason event expanded his lead in the Schwab Cup as he goes for a record sixth title. He is virtually certain to stay atop the standings. ... Steven Alker made it to the second postseason event. He had to Monday qualify for his first PGA Tour Champions event just over two months ago. ... Tom Byrum got the 54th and final spot in the field by $3,868 over Kent Jones in 33 events held the last two years. ... Kirk Triplett goes into the tournament holding down the 36th spot in the Schwab Cup standings. ... Phil Mickelson is at No. 26 with just five events, three of them victories. He plans to play in Phoenix next week.

Notes: Two tournaments remain before the European Tour ends its season at the DP World Tour Championship in Dubai. ... The Portugal Masters dates to 2007. Past champions include Lee Westwood and Shane Lowry. ... Rasmus Hoggaard spent two weeks in Las Vegas on PGA Tour exemptions. He returns to the European Tour and will play alongside his twin brother, Nicolai. They won in consecutive weeks this year. ... Robert MacIntyre was No. 49 in the world after his tie for 15th in the World Golf Championship in Tennessee. He has not earned any ranking points in his last six tournaments, four of them missed cuts. ... Matt Wallace won his first European Tour event at the Portugal Open in 2017. He will be playing his first European Tour event since the BMW PGA Championship in September.

Notes: Yuxin Lin will try to become the first three-time winner of the Asia-Pacific Amateur. Lin and Hideki Matsuyama are the only players to have won it twice. ... The field includes Keita Nakajima, the No. 1 player in the world amateur ranking. ... The winner receives an invitation to play in the Masters, the British Open and the British Amateur. The runner-up is exempt into the Open Qualifying Series with a chance to play his way into the British Open. ... Hideki Matsuyama is the first winner to go on to win the Masters. ... Players from 29 countries that are members of the Asia Pacific Golf Confederation make up the 120-player field. ... The tournament was canceled last year because of the COVID-19 pandemic.