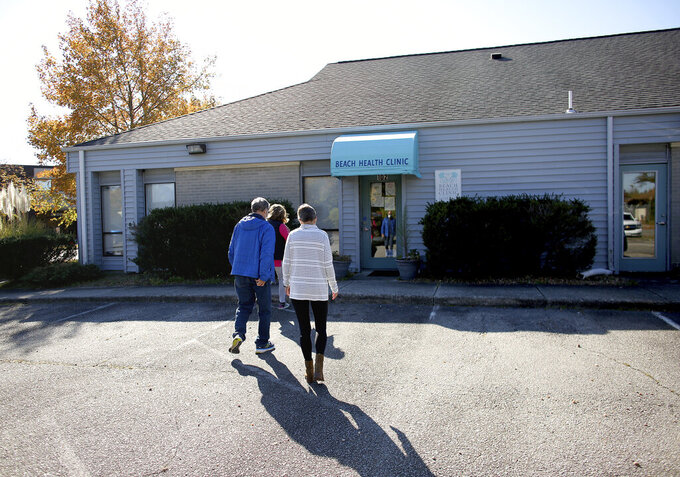 VIRGINIA BEACH, Va. (AP) — Wendy Knight was newly divorced and didn’t have health insurance when she went to Beach Health Clinic for the first time 12 years ago.

“I was welcomed with open arms,” Knight, 60, said. “The best service I ever received.”

Knight has been receiving treatment for diabetes for years.

“I could never, ever afford my prescriptions without the clinic,” she said.

But like many others who are now able to take advantage of recent Medicaid expansions, appointments and medication through her primary care physician are now paid for by the program.

Fewer patients have been coming through Beach Health Clinic’s door lately as Medicaid has made it unnecessary. As a result, the 35-year-old nonprofit facility will close Dec. 1.

“I hate this job now because it’s dismantling something I love so much, but it’s for a good reason,” she said.

On Tuesday morning, Hellstrom met with several physical therapists to sort through medical equipment that will be donated to area nonprofit organizations.

In its early days, the clinic was housed in a small beach cottage on Baltic Avenue and 18th Street at the Oceanfront. It was founded in 1986 by three members of First Presbyterian Church who wanted to help people in need, including the homeless population that would congregate in the resort area.

A few years later, in 1992, it moved to a former library building on 22nd Street. Hellstrom started volunteering in 1997 and remembers how busy the clinic was in the summer.

“We were able to see many patients those days, but we outgrew it,” she said.

In 2001, with help from the city of Virginia Beach, the clinic moved to an office building on 3396 Holland Road. Hellstrom accepted a “temporary” position as executive director in 2003 and ended up serving in that capacity ever since.

“I just liked the idea of helping people when they’re down and out,” she said.

Just six years ago, the clinic was providing more than $5 million yearly in donated services and medication to people who didn’t have health insurance. Community grants helped support it, and dozens of nurses, doctors and medical students dedicated hundreds of volunteer hours to the effort.

“The Virginia Beach medical community really stepped up,” Hellstrom said. “These are the people who have the biggest hearts.”

“The people couldn’t afford it any other way, and they were so grateful,” Ware said. “You felt like you were making a difference for them even more than in a practice where I got paid.”

In its heyday, the lobby was so full that patients spilled over into the conference room, waiting to be seen. Every examining room was busy, and doctors bustled through the hallways. Fresh vegetables grown in the community garden behind the building filled a bowl for the taking.

The doctors at Beach Health Clinic provided care for a range of conditions affecting bones, hearts and minds. Most of their patients were the working poor who set aside a block of time on a certain day of the week to line up outside the door waiting to be seen.

The clinic served patients who landed in Virginia Beach with little money or resources including those who lost their homes during Hurricane Katrina in 2005.

“We were always able to fill that void very quickly,” Hellstrom said.

About three years ago, access to Medicaid expanded in Virginia. Adults ages 19-64 with income at or below 138% of the federal poverty limit now have free health care coverage through the federal and state program. It had a major impact on Beach Health Clinic.

“Eighty percent of our patients just walked,” Hellstrom said. “I’m not saying we weren’t wonderful, but now they can get an appointment, and it covers medication.”

The upkeep of the clinic building became too costly to continue for so few patients. The Beach Health Clinic Foundation, which provided support for the clinic, will continue its mission by sponsoring health travel or medication needs in the community.

Even though Hellstrom’s sad the clinic is closing, she’s happy that its former patients will continue to get the medical care that they need.

“At least in Virginia Beach we were able to make this small difference,” she said.