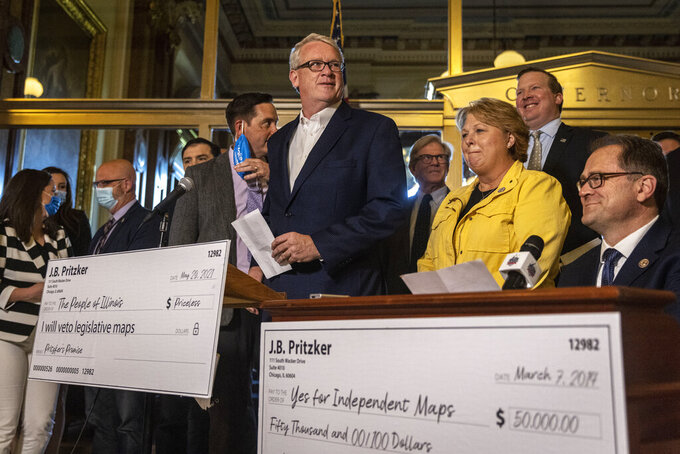 CHICAGO (AP) — Illinois Republican leaders filed a federal lawsuit Wednesday challenging new legislative district boundaries that were drawn and approved by Democrats who control state government, saying residents were “robbed” of a fair and transparent process for creating maps that will be used for elections over the next decade.

Democratic Gov. J.B. Pritzker signed legislation last week establishing the new maps, despite pledging as a candidate that he would veto any maps drawn by politicians. Pritzker said the new maps help ensure minority representation and align with the federal and state Voting Rights Acts.

Republicans and other critics have objected throughout the map-making process, saying Democrats drew the boundaries behind closed doors and using flawed data. Democrats used population estimates from the American Community Survey rather than U.S. Census Bureau data, which is delayed due to the coronavirus pandemic.

The lawsuit seeks to have the maps declared unconstitutional and voided, and asks a judge to direct Welch and Harmon to appoint members to a bipartisan redistricting commission that would draw and approve new maps after official census data is released in August. In a statement, Durkin and McConchie said they would make their appointments to the commission “soon" and that they would work with them and Democratic leaders.

"Today we are entering court on behalf of the thousands of families, small business owners, workers, and taxpayers who said they wanted an independently drawn map, not the one handed down by political insiders desperately clinging to power,” McConchie said.

Democrats have argued that the process was open, saying they took input at a series of public meetings that influenced how the boundaries were drawn. They also said there wasn't time to wait for the census figures because maps must be completed by June 25. But that date is simply when they would lose complete control of the process.

Rep. Lisa Hernandez, a Democrat who led the House Redistricting Committee, criticized Republicans as obstructing what she says was a “citizen-driven process.”

"As expected, the Republicans are doing everything in their power to block a map that reflects the true diversity of Illinois in hopes that they get a chance to single handedly draw a map for their political gain,” Hernandez said.

A Pritzker spokeswoman said Wednesday that Republicans had “signaled that they would sue over these maps, no matter what.”

“The administration believes that these maps preserve electoral power and fair representation for diverse communities, which is why the Governor signed them,” spokeswoman Jordan Abudayyeh said.

Political lines must be redrawn after each decennial Census to reflect changes in population and ensure the protection of voters’ rights. They must be compact, contiguous, and of equal population, among other things.