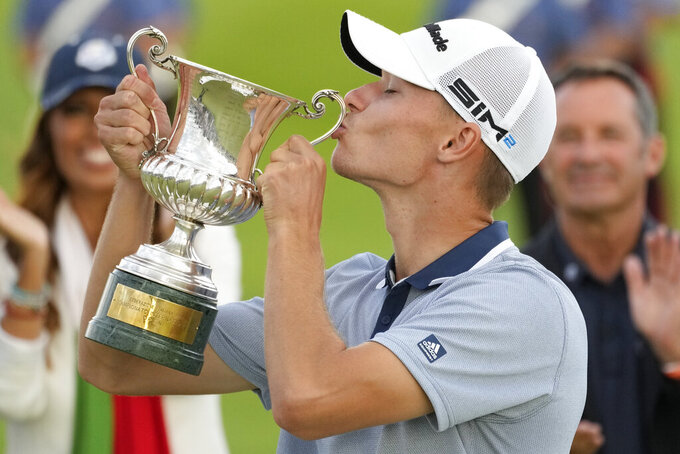 Andrew Medichini, ASSOCIATED PRESS
Nicolai Hojgaard of Denmark kisses the trophy of the Italian Open golf tournament he just won, in Guidonia, in the outskirts of Rome, Sunday, Sept. 5, 2021. The Italian Open took place on the redesigned Marco Simone course just outside Rome that will host the 2023 Ryder Cup.(AP Photo/Andrew Medichini)

Nicolai Højgaard sunk a birdie putt on the 18th hole to win the Italian Open on Sunday, a week after his identical twin brother, Rasmus, won the European Masters in Switzerland by also making a birdie with his final stroke.

“To finish it off like this, and to do it a week after Rasmus won, it’s perfect,” Nicolai said.

It marked the first time in European Tour history that brothers have won back-to-back tournaments.

The 20-year-olds from Denmark are considered two of the continent’s brightest prospects.

In a nod to the future, Nicolai’s success came on the redesigned Marco Simone course just outside Rome that will host the 2023 Ryder Cup.

And he doesn't need to look far for the perfect partner for foursomes and fourball.

“Me and my brother would love to play together," Nicolai said. "We’ve been doing that back home when we’re playing events. So that’s definitely a goal of ours and I can’t wait to come back.”

For his first European Tour victory, Nicolai shot a final-round 71 to finish one stroke ahead of 2018 Ryder Cup standout Tommy Fleetwood and Adrian Meronk of Poland.

Rasmus, who finished in a tie for 18th this week, walked the course again shortly after his final round to watch his brother complete the victory, then rushed out onto the 18th green for a celebratory hug with Nicolai.

And to think that Nicolai was the last man added to the field this week with a wild card from the Italian Golf Federation.

Nicolai held the lead going into the final round but risked ending up in a playoff when his tee shot on the 626-yard, par-5 18th hole landed in the left rough. After laying up safely, though, Nicolai spun his third shot to within four feet of the hole and then made the ensuing putt to clinch the trophy.

“On 18 I knew I had to make four," Nicolai said. "I’ve been nervous many times before but nothing like it (on 18). I couldn’t almost move the putter to be honest.

“I was getting quite emotional when I holed that putt and looked over to see my caddie and Rasmus with my girlfriend and his girlfriend here."

Nicolai’s previous best result was a second-place finish behind Sergio Garcia at the 2019 Dutch Open, while Rasmus’ victory in Crans-Montana was his third on the European Tour.

Nicolai drove the green for an eagle at the par-4 16th hole on Saturday.

“I drove the ball very good the first three days and today was a bit shaky," Nicolai said. "Everything was a little bit shaky today but I would say my length off the tee was probably the biggest advantage this week.”

Andrew Dampf is at https://twitter.com/AndrewDampf