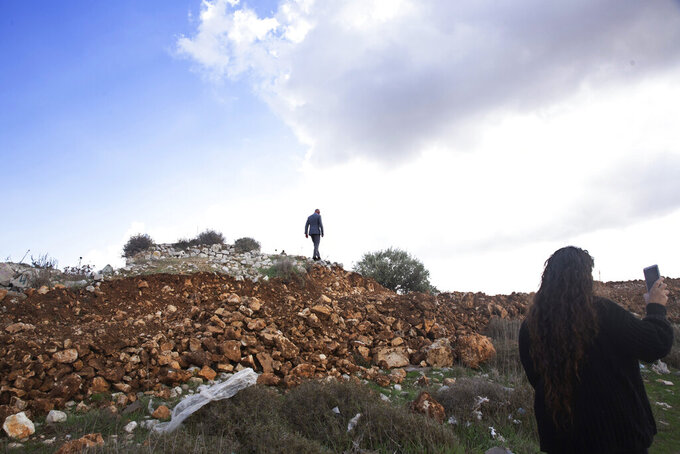 Maya Alleruzzo, ASSOCIATED PRESS
FILE - In this Nov. 16, 2020, file photo, a European Union official visits a construction site for Givat Hamatos settlement in Jerusalem. Israel is quietly advancing controversial settlement projects in and around Jerusalem while refraining from major announcements that could anger the Biden administration. Critics say Israel is paving the way for rapid growth when the political climate changes. (AP Photo/Maya Alleruzzo, File)

JERUSALEM (AP) — Israel is quietly advancing controversial settlement projects in and around Jerusalem without making major announcements that could anger the Biden administration. Critics say the latest moves, while incremental, pave the way for rapid growth once the political climate changes.

On Wednesday, as Foreign Minister Yair Lapid met with U.S. officials in Washington, a local planning committee in Jerusalem approved the expropriation of public land for the especially controversial Givat Hamatos settlement, which would largely cut the city off from Palestinian communities in the southern West Bank.

The same committee advanced plans for the construction of 470 homes in the existing east Jerusalem settlement of Pisgat Zeev. Authorities have scheduled a Dec. 6 hearing for another project in east Jerusalem to build 9,000 settler homes in the Atarot area, according to Ir Amim, an Israeli rights group that closely follows developments in the city.

A military body has meanwhile scheduled two meetings in the coming weeks to discuss a planned settlement of 3,400 homes on a barren hillside outside Jerusalem known as E1. Critics say it would largely bisect the occupied West Bank, making it impossible to establish a viable Palestinian state alongside Israel. A two-state solution is still seen internationally as the only realistic way to resolve the century-old conflict.

“The fact that simultaneously all of these very controversial plans that have been longstanding international red lines have now been advancing ... is very indicative that the Israeli government intends to advance and ultimately approve these plans," said Amy Cohen of Ir Amim.

Jerusalem’s deputy mayor Fleur Hassan-Nahoum downplayed the latest developments, noting that Givat Hamatos was approved years ago. “Nothing’s changed over the last few years,” she said. “We are a city and we’re providing for our residents."

Spokespeople from the defense and housing ministries, which are also involved in approving settlements, declined to comment.

Construction is already underway in Givat Hamatos, where tenders for more than 1,200 homes were announced last November. The other projects are still progressing through a long bureaucratic process, and it could be months or years before shovels break ground.

But critics of the settlements say every step matters.

“The thing with those plans is that in order to make them come true you need to do the whole process,” said Hagit Ofran, of the Israeli anti-settlement monitoring group Peace Now. “Every step on the way is in the control of the government... If they don’t act to stop it, then it happens.”

Every Israeli government since 1967 has expanded settlements in east Jerusalem and the West Bank, territories Israel seized in the Mideast war that year which the Palestinians want for their future state. The Palestinians view the settlements — now housing some 700,000 settlers — as the main obstacle to peace, and most of the international community considers them illegal.

Israel annexed east Jerusalem and considers the entire city to be its capital. It views the West Bank as the biblical and historical heartland of the Jewish people. But it has refrained from annexing the territory because of international pressure and because it is home to more than 2.5 million Palestinians, the absorption of whom could erode Israel's Jewish majority.

U.S. presidents from both parties opposed the settlements until President Donald Trump broke with that tradition, proposing a Mideast plan in which Israel would keep all of them. The Trump era witnessed explosive growth in settlements, and Trump's secretary of state, Mike Pompeo, broke with precedent by visiting one last year. Pompeo, a possible Republican presidential hopeful in 2024, was back in Israel this week and paid another supportive visit to a settlement.

President Joe Biden's administration has criticized settlement construction as an obstacle to eventually reviving the long-moribund peace process but has not demanded a freeze. In 2010, Israel announced a major settlement project during a visit by then-Vice President Biden, aggravating a diplomatic rift that festered throughout President Barack Obama's presidency.

Biden, who as president is prioritizing other challenges like COVID-19, China and climate change, appears keen to avoid a showdown with Israel, a close U.S. ally.

“We have been clear publicly and in private about where we stand on settlement activity and on annexation," State Department spokesman Ned Price said Thursday. "We oppose any unilateral steps that put a two-state solution further out reach.”

When asked whether that concern had grown recently, he said it had “remained constant.”

Israel's political system is dominated by pro-settlement parties and its new prime minister, Naftali Bennett, is opposed to a Palestinian state. But he heads an unwieldy coalition of parties from across the political spectrum — some opposed to settlements — and appears to be seeking middle ground that would sideline the issue at home and abroad.

A senior Israeli official who participated in Lapid’s meetings in Washington said the discussions had focused primarily on Iran and Israel’s relations with its Arab neighbors but acknowledged that the Americans had raised the settlements issue.

However, the Palestinian issue was "not the dominant theme in the region" during the discussion, the official said. The official was not authorized to discuss the details of the private talks and spoke on condition of anonymity.

A State Department readout of Secretary of State Antony Blinken’s meeting with Lapid made no specific reference to settlements in the one sentence it devoted to the Palestinians.

With U.S. attention focused elsewhere, and the Palestinian leadership divided and increasingly unpopular, Israel faces few if any immediate consequences for expanding settlements.

But critics have long warned that the failure to create a viable Palestinian state will leave millions of Palestinians living under permanent Israeli rule without the same rights as Jews. Two well-known human rights groups say Israel has already become an apartheid state.

“These are all incremental steps in order to create a new reality on the ground, an irreparable reality,” Ir Amim's Cohen said about the advancement of settlements. “You are foiling any prospect of a two-state framework.”