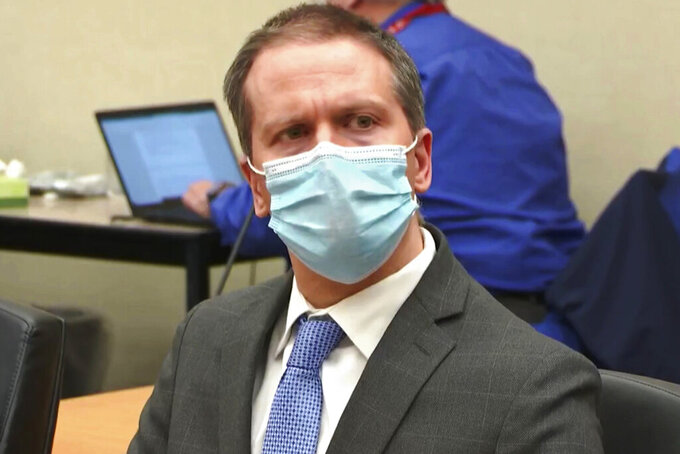 Uncredited, ASSOCIATED PRESS
FILE - In this April 20, 2021, file image taken from video, defendant, former Minneapolis police Officer Derek Chauvin, listens to verdicts at his trial for the 2020 death of George Floyd at the Hennepin County Courthouse in Minneapolis. Chauvin was convicted of murder and manslaughter charges in state court and is scheduled to be sentenced June 25. Prosecutors say Chauvin should not be granted a new trial, because the proceedings were fair and he was found guilty by an impartial jury, according to a court document filed Wednesday, June 16. (Court TV via AP, Pool, File)

MINNEAPOLIS (AP) — Prosecutors say the former Minneapolis police officer convicted of murder and manslaughter in George Floyd's death should not be granted a new trial because the proceedings were fair and Derek Chauvin was found guilty by an impartial jury, according to a court document filed Wednesday.

The state's document came in response to defense requests to grant Chauvin a new trial and to hold a hearing to question jurors about alleged misconduct. Among other things, defense attorney Eric Nelson said intense pretrial publicity, alleged prosecutorial misconduct and some decisions by the court made it impossible for Chauvin to get a fair trial.

Prosecutors said Nelson's claims were without merit and were desperate attempts to “undo the jury's verdict.”

“This Court has rejected many of these arguments before, and there is no reason for a different result now. Defendant’s scattershot and unavailing attempts to overturn his conviction should be denied,” prosecutors wrote, adding: “Defendant was unanimously convicted on all three counts based on evidence of his overwhelming guilt. He now seeks to escape his lawful conviction by any means."

It’s not clear when Judge Peter Cahill will rule.

Chauvin was convicted in April of second-degree unintentional murder, third-degree murder and manslaughter in the May 25, 2020, death of Floyd, a Black man who was pinned to the ground for about 9 ½ minutes as he said he couldn’t breathe. Chauvin will be sentenced June 25.

Requests for a new trial are fairly routine, but they are rarely granted. The arguments raised in such requests are often raised again on appeal. Requests for a hearing to question jurors about alleged misconduct are uncommon. Experts have said there is a high bar to hold such a hearing, and an even higher bar to invalidate a verdict.

Among his arguments, Nelson said intense publicity — both before the trial and due to events during it — tainted the jury pool and prejudiced jurors against his client.

There were reports in February that Chauvin had been prepared to plead guilty to third-degree murder. During jury selection, a $27 million settlement was announced between Minneapolis and Floyd’s family. And during Chauvin's trial, Daunte Wright was fatally shot by a police officer in nearby Brooklyn Center, sparking days of protests.

Nelson said Cahill abused his discretion when he denied earlier requests to move the trial out of Hennepin County, postpone the trial and sequester the jury.

Prosecutors disagreed, saying Chauvin got a fair trial and nothing requires the court to take the extraordinary step of overturning the verdict. They said the court made sound decisions to manage the trial and those decisions did not prejudice Chauvin. They cited the lengthy process of jury questioning, the fact that the judge kept the jury anonymous and that two seated jurors were dismissed because it was determined they could not be impartial after learning of the city's settlement. They also noted that each side got additional strikes, and the defense still had strikes remaining when a jury was picked.

They said Nelson did not meet his burden of showing that specific jurors in this case were impacted by publicity, and each juror was carefully vetted, noting that 326 potential jurors returned answers to more than 69 written questions.

“A juror’s mere exposure to pretrial publicity does not create a reasonable likelihood of an unfair trial,” prosecutors wrote, adding: “This process was well-designed to weed out biased jurors."

Nelson also asked for a Schwartz hearing to “impeach” the verdict, which means a hearing to call into question the integrity or validity of a verdict. Under Minnesota’s Rules of Criminal Procedure, a defendant can ask the court for a hearing to investigate possible juror misconduct. Prosecutors say that request should be denied.

Nelson alleges an alternate juror, who did not deliberate, made public comments after the trial indicating she felt pressured to render a guilty verdict.

He also alleged that a juror who did deliberate, Brandon Mitchell, didn’t follow jury instructions and was not candid during jury selection because he didn’t mention his participation in an Aug. 28 march in Washington, D.C., to honor Martin Luther King Jr. Nelson also alleged Mitchell made comments indicating he based his verdict on outside influence.

Prosecutors said comments made by the alternate juror are irrelevant because she didn't deliberate. In Mitchell's case, they said, Nelson has mischaracterized the comments Mitchell made to the media. They said Mitchell filled out the lengthy juror questionnaire and made his views known during the jury selection process.

“Any fair reading of this record shows that Juror 52 honestly disclosed his views on a range of issues, including his impressions of Black Lives Matter, the criminal justice system, the case, and his desire to serve on this jury,” prosecutors wrote.

They said that Mitchell correctly characterized the event in Washington as a civil rights march, and that Nelson's claims that he should have disclosed it fall short.