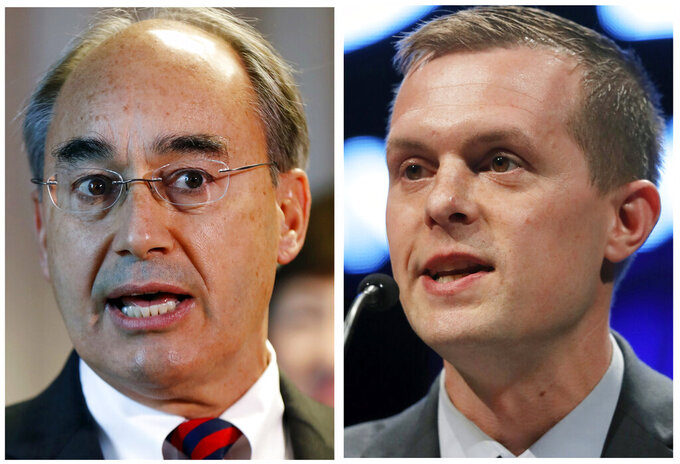 Robert F. Bukaty, ASSOCIATED PRESS
FILE - This combination of file photos shows Republican former Rep. Bruce Poliquin in 2017, left, and Democratic Rep. Jared Golden in 2018, right, in Maine. The congressional candidates in the hotly contested Maine race sparred on Tuesday, Sept. 27, 2022, about a contribution from the leader of a conservation group that has discouraged consumers from buying lobster. (AP Photos/Robert F. Bukaty, File)

PORTLAND, Maine (AP) — Congressional candidates in a hotly contested Maine race snipped at each other on Tuesday about a contribution from the leader of a conservation group that has discouraged consumers from buying lobster.

Seafood Watch, which is based at the Monterey Bay Aquarium in California that Packard helped found, added American and Canadian lobster to its “red list” of seafood species to avoid this summer because of the risk fishing gear poses to endangered whales. Poliquin's camp said that listing has caused economic hardship for fishermen in Maine, where most of the U.S.'s domestic lobster comes to the docks.

Golden's campaign responded that the congressman has no intention to return the money. The campaign cited Golden's opposition to new National Oceanic and Atmospheric Administration whale protection regulations as evidence that he has the fishing industry's interests at heart.

“Lobstermen know Jared has led the fight against the outrageous NOAA right whale rules, and has been the staunchest defender of the fishery in Congress,” said Bobby Reynolds, a Golden spokesperson.

Federal Election Commission records state Packard made the donation in June 2020, before Seafood Watch added lobster to its list of seafood species to avoid. Packard did not respond to a request for comment.

The 2nd District race has been an expensive one, with Golden racking up more than $3.3 million in contributions through June 30, and Poliquin trailing at $2.5 million. Both candidates have positioned themselves as allies of traditional industries such as lobstering in the vast, mostly rural district. The 2nd District is the more politically mixed of the state's two districts, as the 1st District is based around liberal Portland and is more reliably Democratic.

The sole debate featuring all three candidates took place on Tuesday night, and Poliquin and Golden traded more barbs about the donation. The candidates also vowed to support Maine lobstermen. The same three candidates ran for the same seat in 2018, and Golden won via ranked-choice voting.

Bond, who came in third in that race, said candidates “shouldn’t be taking these donations at all so we don’t have to wonder one way or the other.” She has accepted only a few thousand dollars in campaign donations.