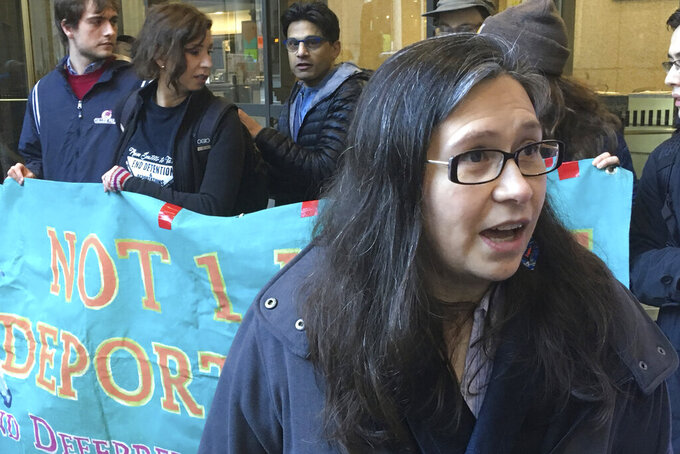 Gene Johnson, ASSOCIATED PRESS
FILE - In this March 15, 2018, file photo, immigrant rights activist Maru Mora Villalpando speaks with reporters outside the U.S. immigration court building in downtown Seattle. Mora Villalpando, a Mexico City native and a Northwest immigrant rights activist who had been facing deportation, said Tuesday, Sept. 21, 2021, she can now remain in the U.S., after the Department of Homeland Security agreed to drop her case. She has been in the U.S. since overstaying a visa in 1996. (AP Photo/Gene Johnson, File)

SEATTLE (AP) — A Northwest immigrant rights activist who had been facing deportation said Tuesday she can now remain in the U.S., after the Department of Homeland Security agreed to drop her case.

Maru Mora Villalpando, a Mexico City native, has been in the U.S. since overstaying a visa in 1996. An immigration judge last week approved the decision to drop deportation proceedings against her and granted her legal permanent resident status, amid the Biden administration's re-evaluation of immigration enforcement priorities.

Mora Villalpando argued that the Trump administration targeted her for deportation in 2017 because she advocates on behalf of detained immigrants at the privately run Northwest detention center in Tacoma.

U.S. Immigration and Customs Enforcement documents showed that she first came to the attention of officials when she discussed her unlawful immigration status in a news interview — and that officials were aware of her “extensive involvement with anti-ICE protests and Latino advocacy programs.”

ICE denied targeting her or any other immigrant for political reasons, and immigration judge Brett Parchert rejected her arguments on those grounds.

But in June, the Department of Homeland Security issued new guidance in line with President Joe Biden's effort to dismantle former President Donald Trump's hardline immigration policies. The guidance stressed that DHS should focus its deportation efforts on noncitizens who present risks to national security, border security or public safety.

“Immigration judges should be prepared to inquire, on the record, of the parties appearing before them at scheduled hearings as to whether the case remains a removal priority for ICE and whether ICE intends to exercise some form of prosecutorial discretion,” the department said.

Texas sued to block the guidance from taking effect, but a federal appeals court last week said the new policy could remain in force.

Mora Villalpando had no criminal record and her case posed no such security issues. She and her attorney, Devin Theriot-Orr, requested that the agency use its prosecutorial discretion to drop her case, and the agency agreed, she said.

“I can't get used to it — I'm not undocumented any more,” Mora Villalpando said Tuesday. “I can actually get a green card now.”

Her daughter, a U.S. citizen, had already petitioned for legal permanent resident status on Mora Villalpando's behalf. It was only the deportation proceedings pending against her that had blocked her from receiving it, she said.

Mora Villalpando continues to advocate for the detainees, such as by promoting those engaging in hunger strikes to protest conditions at the facility, including recent COVID-19 cases inside.

The organization she founded, La Resistencia, has sought to shut down the Northwest detention center. The group's advocacy helped lead to the passage this year of a law that would ban for-profit detention centers in Washington state by 2025.

The GEO Group, which runs the immigration jail, has sued to block the law.