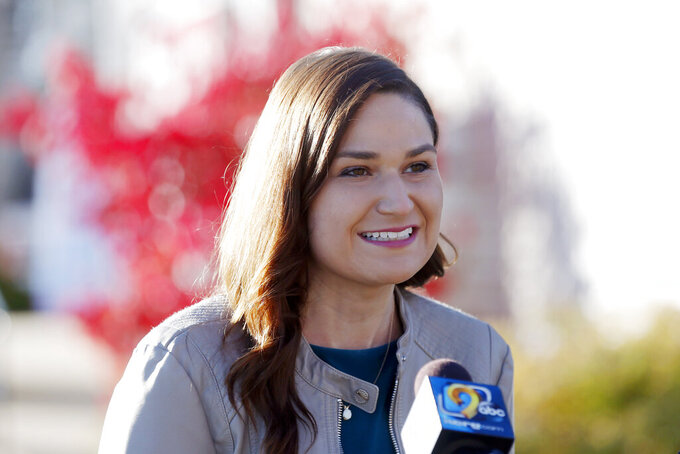 DES MOINES, Iowa (AP) — Democrat Abby Finkenauer, a former congresswoman, is running for Republican Chuck Grassley's U.S. Senate seat, hoping her blue-collar credentials will propel her forward in a state that has grown more conservative over the years.

The 32-year-old former state lawmaker, who announced her candidacy by video Thursday morning, would offer a stark contrast to the 87-year-old Grassley, who was elected to his first term in the Senate eight years before Finkenauer was born.

“I’m running ... to make sure that Iowans and, quite frankly, our country has someone sitting in the United States Senate representing them and working for them every day who actually understand working families,” Finkenauer told The Associated Press in an interview before the video release.

Finkenauer, despite losing her House seat in 2020 after one term, remains a youthful prospect in the Iowa Democratic Party, which has struggled to produce a new generation for statewide office. Along with 38-year-old Democrat Dave Muhlbauer, a farmer who previously announced his bid for Grassley's seat, she is hoping Grassley's slipping poll numbers provide an opening to revive a shrinking segment of the party’s once diverse electorate: rural voters.

Grassley has said he will announce by November whether he will seek an eighth term, though he talks regularly with campaign aides and reported this month having $2.5 million in his campaign account as of the end of June.

Despite job approval that's ebbed in the past decade, Grassley would be the favorite to win reelection and faces a nominal primary opponent in state Sen. Jim Carlin. State and local Democratic officials have said the party has receded in the onetime battleground state, particularly from the industrial river towns they once claimed as bastions, notably in Finkenauer's former northeast Iowa district.

Finkenauer accuses Grassley of showing too much fealty to Trump, citing his near-silence on the former president's unfounded claims of widespread election fraud before the Jan. 6 insurrection.

Trump's allegations of fraud in the election he lost to Joe Biden were rejected by courts, his attorney general and other prominent Republicans.

Grassley condemned the January Capitol riot as “an attack on democracy itself" but hasn’t publicly suggested Trump quit arguing the 2020 presidential election was stolen. When pressed at a recent public meeting in Iowa to call out Trump’s falsehoods, Grassley declined, stating simply, “Biden is the president of the United States.”

Touting the union family profile that put her in Congress in 2018, Finkenauer also chastised Grassley for not being among the bipartisan group of senators working on a nearly $1 trillion infrastructure deal brokered with Biden. Grassley voted Wednesday to block the infrastructure bill's advance.

Such a package “means jobs, and that’s what I know matters to people in Iowa and across the country," Finkenauer said.

That profile was little help in 2020 as working-class voters who once fueled Iowa Democratic Party strength along the Mississippi River leaned toward Trump and lifted Republican Ashley Hinson over Finkenauer.

The Democratic Senatorial Campaign Committee doesn't consider Iowa among its top targets, though it is monitoring in the event Grassley doesn't seek reelection. In the meantime, the group is stressing economic gains made under Biden and attributing them to action in the narrowly Democratic-controlled Senate.

Instead of Iowa, Democrats are focused first on holding Senate seats in Arizona, Georgia, Nevada and New Hampshire. After that, they see opportunities to gain seats in Wisconsin, Pennsylvania and North Carolina, all narrow presidential battleground states.

The Iowa Senate race is among those in a group of states Biden lost, including Florida, Missouri and Ohio.