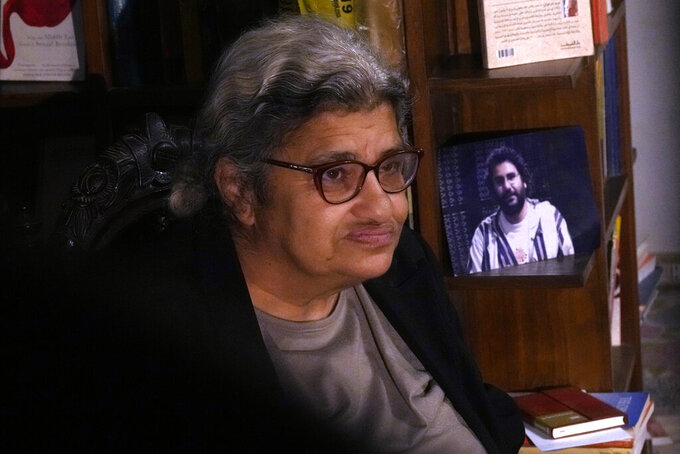 Amr Nabil, ASSOCIATED PRESS
FILE - Laila Soueif, mother of jailed pro-democracy activist Alaa Abdel-Fattah, speaks during an interview with the Associated Press in front of his picture at her home in Cairo, Egypt, Thursday, Nov. 10, 2022. The family of imprisoned Egyptian activist Alaa Abdel-Fattah says that they have seen him on Thursday, Nov. 17, and that his condition has “deteriorated severely."’ (AP Photo/Amr Nabil, File)

CAIRO (AP) — The family of imprisoned Egyptian activist Alaa Abdel-Fattah said they were allowed to see him for the first time in nearly a month on Thursday and that he is “very very thin” after ending a hunger strike that prompted widespread concern for his health.

The activists' mother, aunt and one of his sisters visited Abdel-Fattah at the prison of Wadi el-Natroun, north of Cairo. They said the conversation was conducted through a pane of glass with a headset, during which he told them that he halted his hunger strike after collapsing in the shower last week.

“He was exhausted, weak and vulnerable,” the family said in a statement, read out by Abdel-Fattah's aunt Ahdaf Soueif to journalists at the family's Cairo home. “He was very, very thin.”

Abdel-Fattah, who turns 41 on Friday, is one of Egypt’s most prominent pro-democracy voices. He had intensified a hunger strike and halted all calories and water earlier in November to coincide with the start of the U.N. climate conference, known as COP27, in the Egyptian Red Sea resort of Sharm el-Sheikh.

He has spent most of the past decade in prison because of his criticism of Egypt’s rulers. Last year, he was sentenced to five years for sharing a Facebook post about a prisoner who died in custody in 2019.

Concerns for his health intensified as the family was barred from seeing him. They stepped up their campaign to draw attention to his case and those of other political prisoners in Egypt.

Last Thursday, prison authorities said began an unspecified medical intervention on Abdel-Fattah while his sister Sanaa Seif campaigned at COP27 to raise awareness about her brother’s case. Then earlier this week, he informed his family in handwritten notes that he had started drinking water again and ended the hunger strike.

The family, who was initially surprised that he had broken his hunger strike, said that during their visit, Abdel-Fattah explained the events that followed his last drink of water on Nov. 6.

He told them he had threatened prison authorities that he would take his life after they tried to pressure him into a medical checkup but would not acknowledge his hunger strike, the family said.

He said he beat his head against his cell wall until it bled, to try to them to file an incident report, and was restrained at one point, the family said. On Nov. 11, he collapsed in the shower. He awoke surrounded by his cell-mates, with an IV in his arm.

“He talked about all of this as a near-death experience,” the family's statement said. “There was a strong part of him that was ready to die.”

The halting of the hunger strike had prompted his family to ask if the government had perhaps given him a deal. Before Thursday, the last time his family had seen Abdel-Fattah was on Oct. 24 — they had not been updated on his condition since then.

On Thursday, he told them there was no deal.

“There have been no negotiations with the authorities, and no promises have been made,” the family said. “He has been completely in the dark as to what’s happening in the world outside.”

Abdel-Fattah's hunger strike drew attention on Egypt’s heavy suppression of speech and political activity, during the country's hosting of the climate summit this month. Since 2013, President Abdel-Fattah el-Sissi’s government has cracked down on dissidents and critics, jailing thousands, virtually banning protests and monitoring social media.

At the climate conference, world leaders had raised the activist’s case in their private talks with el-Sissi, including U.S. President Joe Biden, British Prime Minister Rishi Sunak, French President Emmanuel Macron and German Chancellor Olaf Scholz. Abdel-Fattah gained British citizenship earlier this year through his mother, who was born in London. The family has frequently criticized the British government for not doing enough to secure his release.

Egypt’s foreign minister has tried to divert attention from Abdel-Fattah at the summit. In an interview with The Associated Press on Saturday on the sidelines of COP27, Sameh Shoukry said the priority of the summit should be focused on ‘‘the existential challenge related to climate change’’ not the activist’s well-being.

Abdel-Fattah rose to fame during the 2011 pro-democracy uprisings that swept through the Middle East, toppling Egypt’s long-time autocratic President Hosni Mubarak. He has been imprisoned several times, and has spent a total of nine years behind bars, becoming a symbol of Egypt’s sliding back to an even more autocratic rule under el-Sissi.

His family said they fear he could again start refusing food if he sees no progress towards his release.

“He will have no choice but to resume his hunger strike imminently if there continues to be no real movement on his case,” the statement said.

In recent months, the Egyptian government has sought to improve its international image through mass prisoner releases via presidential pardons and its establishment of a new “strategy” to upgrade the country’s human rights conditions.

A number of human rights groups have cast doubt on these measures and accused Egypt of using the gathering in Sharm el-Sheikh to further whitewash its poor rights record. Egypt is among the world’s worst jailers of journalists, along with Turkey and China, according to 2021 data produced by the U.S.-based Committee to Protect Journalists. Human Rights Watch estimated in 2019 that as many as 60,000 political prisoners are incarcerated in Egyptian prisons, many without trial.