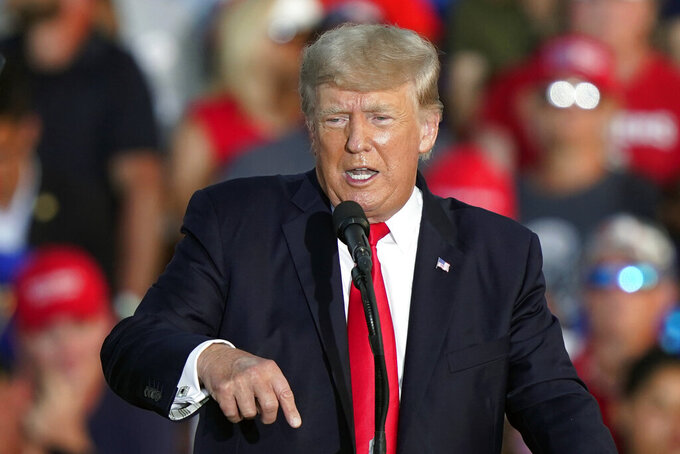 Tony Dejak, ASSOCIATED PRESS
FILE - Former President Donald Trump speaks at a rally at the Lorain County Fairgrounds, June 26, 2021, in Wellington, Ohio. Former President Trump is returning to Ohio to try to boost Republican candidates and turnout ahead of the May 3 primary. Trump will headline an evening rally at the Delaware County Fairgrounds in Delaware, north of Columbus, on April 23. (AP Photo/Tony Dejak)

COLUMBUS, Ohio (AP) — Former President Donald Trump is returning to Ohio to try to boost Republican candidates and turnout ahead of the May 3 primary.

Trump will headline an evening rally at the Delaware County Fairgrounds in Delaware, north of Columbus, on April 23 — certainly to stump for U.S. House candidate Max Miller, his pick for the 7th Congressional District, and perhaps for U.S. Senate or governor choices he is yet to make.

The county, a GOP stronghold, appears to have been at least the Trump team's third choice. A fair board in Portage County — part of the Akron metro area where Miller is locked in a four-way primary — declined a permit request for the event, as did the fairgrounds in nearby Canfield.

News of the rally comes as early voting figures suggest turnout in the populous Midwest battleground, which Trump won twice by more than 8 percentage points, may be severely depressed this year.

Republican Secretary of State Frank LaRose announced Tuesday that 71,296 absentee ballots have been requested so far by-mail or in-person, down more than 40% from the 171,954 that had been requested at this point four years ago. He said 11,935 votes have been cast statewide so far, less than a fifth of the 63,253 that had been cast at this point in 2018.

The downturn follows a monthslong redistricting fight that had left the fate of the primary in limbo until the 11th hour, as well as amid Trump's own continued questioning of the integrity of U.S. election systems and their role in a 2020 election he falsely claims was stolen.

Leading candidates in a heated seven-way Republican primary for the open U.S. Senate seat of retiring Republican Rob Portman have been angling for Trump's endorsement for almost a year — so far in vain.

Meanwhile, former U.S. Rep. Jim Renacci is touting his past support from Trump in his GOP primary bid against Republican Gov. Mike DeWine. Though Trump endorsed Renacci in a failed bid to unseat Democratic U.S. Sen. Sherrod Brown in 2018, the former president has not taken sides so far in this year's gubernatorial primary.