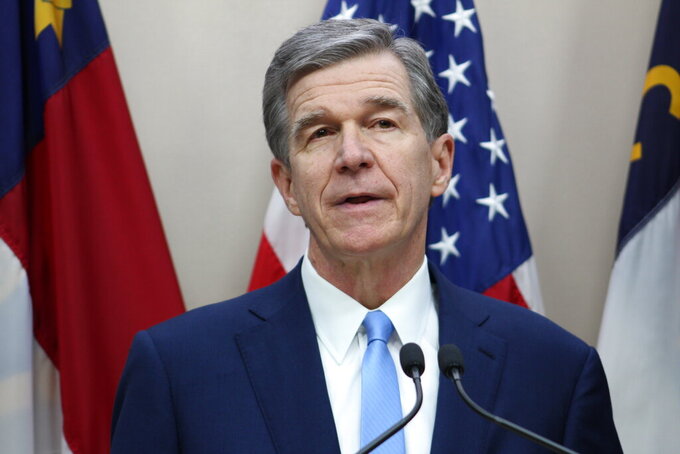 RALEIGH, N.C. (AP) — North Carolina Democratic Gov. Roy Cooper announced on Tuesday that he would sign the legislature’s final two-year budget bill into law once it reaches his desk, saying the good contained inside the Republican-penned bill “outweighs the bad.”

Holding a news conference as the Senate convened to debate the budget plan, Cooper said that there were many “missed opportunities” and several areas that he opposes. But he said the state needs a comprehensive budget plan — there hasn't been one in place since mid-2019 — to address the needs of schools, small businesses and families as North Carolina emerges from the pandemic.

The bill contains significant raises and bonuses for teachers and state employees, a $15-per-hour pay floor come next year for local school employees who aren't teachers and $5.9 billion for state agencies and higher education building projects. There are also individual and corporate income tax cuts, as well as tax breaks for businesses still struggling in the COVID-19 recovery.

"I will sign this budget because of its critical and necessary investments, and I will fight to fix its mistakes," Cooper told reporters.

Cooper already last week signaled his willingness to sign the bill after he, Senate leader Phil Berger and House Speaker Tim Moore held serious negotiations for nearly two months. With a spending plan that's 4 1/2 months late, North Carolina is currently the only state in the nation without an enacted budget, according to the National Conference of State Legislatures.

Still, the governor could have vetoed the bill or let it become law without his signature. Cooper's announcement opened the door for nearly two-thirds of the Senate's 22 Democrats to join all Republicans present in voting 40-8 for the final bill Tuesday afternoon. One more Senate vote was expected Wednesday, when the House also planned the first of its two required votes.

Before now, Cooper had never signed a traditional, comprehensive state budget into law since taking office in 2017. During Cooper’s first two years, Republicans overrode his budget vetoes with veto-proof majorities. In 2019, after Democrats gained seats and Cooper connected the budget to an unsuccessful attempt to expand Medicaid to hundreds of thousands of additional residents, his veto couldn’t be overturned by Republicans, leading to a stalemate with GOP leaders that was never fully resolved.

Republicans still lacked veto-proof majorities this year. But with massive state revenue surpluses combined with billions in federal COVID-19 relief aid, more Democrats sounded willing to get a budget passed that also contained sweeteners benefitting their communities. Republicans gained leverage when they managed to win “yes” votes on earlier versions of budget legislation from over a dozen Democrats — more than enough for an override if they stuck with Republicans.

“The fact that a number of Democrats have indicated their support for the budget had to have had some play in (Cooper's) decision," said Berger, a Rockingham County Republican. But he said there’s been plenty of give and take to create a bill that reflects Cooper's input. The governor pointed in part to $1 billion in federal funding for expanding broadband and more for water and sewer improvements.

“This budget has got his fingerprints all over it," Berger said.

Still, Cooper said Tuesday he still believed Senate Democrats would have been able to uphold a veto, but he said he was worried that Republican lawmakers would simply walk away from budget negotiations had that happened.

The nearly 1,400 pages of budget documents contain several provisions on GOP policy that the second-term governor has railed against. They include a plan to eliminate the state’s already low 2.5% corporate income tax rate by the end of the decade, although the phaseout wouldn’t begin until early 2025. The individual income tax rate also would drop over time from 5.25% to 3.99%, starting next year.

“There are many years to fight for a fairer tax system in our state that gives the tax cuts to lower income and middle income families instead of those who need it least,” Cooper said.

Senate Minority Leader Dan Blue of Wake County voted against the bill, criticizing in a floor speech a structural deficit he said the tax cuts will cause and how several urban counties won't benefit from $100 million in teacher salary supplements. “I had higher hopes for this budget, both in the process and in the end result,” he said.

The measure again doesn’t contain Cooper’s wish to expand Medicaid through the 2010 federal health care law. Instead, the bill would authorize a committee to study health care access and recommend legislation next year.

Cooper also may have to live with new rules that would limit his emergency powers, such as during the pandemic. The language says a governor would have to receive support from a majority of Council of State members to expand an emergency declaration beyond 30 days. The General Assembly would have to act for one to go beyond 60 days. The governor vetoed a bill with similar language two weeks ago, complaining in part that it would have taken effect immediately. The budget provision delays the start until January 2023.