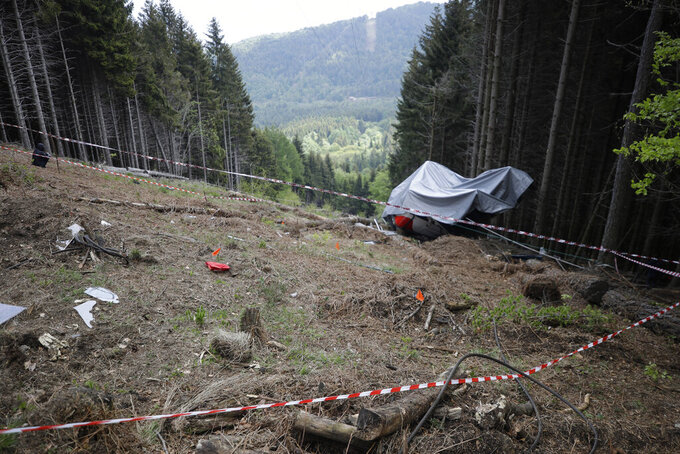 Luca Bruno, ASSOCIATED PRESS
FILE - In this May 26, 2021 file photo, the wreckage of a cable car after it collapsed near the summit of the Stresa-Mottarone line in the Piedmont region, northern Italy. A six-year-old boy who was the sole survivor of a cable car crash this year in northern Italy is at the center of a bitter custody battle between his maternal grandparents in Israel and his paternal relatives in Italy, who claim the child was flown without their permission to Israel over the weekend. (AP Photo/Luca Bruno)

JERUSALEM (AP) — The grandfather of a 6-year-old boy who survived a cable car crash in Italy that killed his immediate family and is now the target of a bitter custody battle on Friday defended his decision to spirit the child off to Israel.

Eitan Biran's parents and younger sibling were among 14 killed in May when a cable car slammed into a mountainside in northern Italy. He is now the focus of a custody battle between his maternal grandparents in Israel and his paternal relatives in Italy.

Shmulik Peleg, his maternal grandfather, was questioned by Israeli police on kidnapping suspicions and placed under house arrest amid an ongoing investigation. Biran's paternal relatives say he was taken without their knowledge and have filed a legal complaint in Italy seeking his return.

In an interview with Israel's Channel 12, the 58-year-old Peleg said Biran was “happy, surrounded by his family members.”

“He is in the place where he is supposed to be, in his home, in Israel,” he said.

He acknowledged driving the child from Italy into Switzerland before flying him back to Israel, saying “we departed in a totally legal way.” He insisted that his “thoughts are devoted only to the good of the child, the good of Eitan.”

Eitan and his parents were living in Italy at the time of the accident, and after his release from a Turin hospital following weeks of treatment, Italian juvenile court officials ruled the child would live with a paternal aunt near Pavia, in northern Italy.

Italian daily Corriere della Sera said Peleg drove Eitan in a rented car to Lugano, Switzerland, where they boarded a chartered flight to Tel Aviv. In the interview, Peleg declined to comment on why he did not take a regular flight out of Italy.

Italian authorities also opened an investigation this week. The boy’s paternal aunt, Aya Biran, filed a formal request with the Italian court system seeking Eitan’s return to Italy. She had also told police that Peleg last Saturday had failed to return Eitan to her home as agreed.

Eitan’s relatives in Israel deny abducting him and insist they are acting in his interest.

Peleg told Channel 12 he had given up on contesting custody in the Italian court system and said he expected the boy to understand once he got older.

“I believe that one day Eitan will grow up and say grandfather, you did everything for me, you saved me,” he said, breaking into tears. "And my daughter, who one day will meet me in heaven, will be proud of me that I saved her son.”