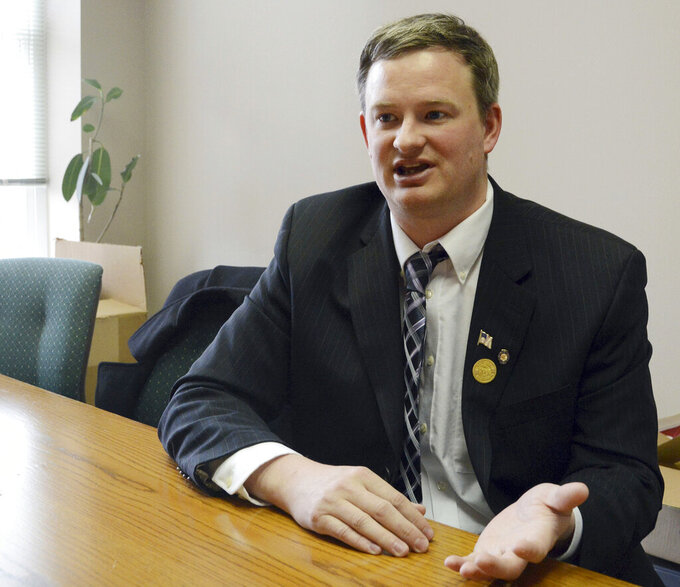 Dirk Lammers, ASSOCIATED PRESS
FILE - South Dakota Attorney General Jason Ravnsborg speaks in Sioux Falls, S.D., on Feb. 23, 2014. The South Dakota Senate on Tuesday, April 26, 2022, approved the rules for an impeachment trial of the state's attorney general for his conduct surrounding a 2020 fatal car crash, laying out a two-day proceeding in June that gives just hours to either side to argue their case. (AP Photo/Dirk Lammers, File)

SIOUX FALLS, S.D. (AP) — The South Dakota Senate on Tuesday approved the rules for an impeachment trial of the state's attorney general for his conduct surrounding a 2020 fatal car crash, laying out a two-day proceeding in June that gives just hours to either side to argue their case.

Attorney General Jason Ravnsborg, a Republican, was impeached by the House this month over the crash in which he killed a pedestrian but initially said he may have struck a deer or other large animal. The Senate trial, which will decide whether he is guilty of the House impeachment charges, is historic since Ravnsborg is the first official to be impeached in South Dakota.

The trial's rules received unanimous approval in the Republican-controlled Senate. They give both the impeachment prosecutors and Ravnsborg's defense attorney one hour for an opening statement, four hours to present evidence and one hour to close their arguments. Senators may take additional time to ask additional questions, debate the articles of impeachment and hear directly from Ravnsborg if he chooses to testify. The trial starts June 21.

“These rules were designed to be a very simple and fair process,” said Republican Sen. Lee Schoenbeck, who presides over the Senate. He added that the files used in the impeachment investigation will be posted online and he expects senators to review those before the trial.

Ravnsborg last year pleaded no contest to two misdemeanors in exchange for the third being dropped by prosecutors. The 45-year-old Republican, who took office in 2019, was returning home from a Republican dinner in September 2020 when he struck and killed Joseph Boever, who was walking along a rural highway. A sheriff who responded after Ravnsborg called 911 initially reported it as a collision with an animal. Ravnsborg has said he did not realize he hit a man until he returned the next day and found the body.

Ravnsborg is facing two articles of impeachment: one for committing crimes that caused someone’s death and the other for making “numerous misrepresentations” to law enforcement officers after the crash, as well as using his office to navigate the criminal investigation.

The attorney general has stayed mostly silent during the political and legal aftermath of the crash. He did not answer an invitation to appear before a House impeachment investigation committee and did not appear at any of the criminal court hearings.

After his impeachment, Ravnsborg said he is looking forward to the Senate trial as a chance to “be vindicated.” His attorney and spokesman did not immediately respond to requests for comment Tuesday on the Senate rules and whether he will testify at the trial.

Ravnsborg has faced numerous calls to resign from within his own party, most prominently from Gov. Kristi Noem. But so far, he has refused, although the state constitution requires him to take a leave of absence from his official duties until the Senate trial concludes.

Schoenbeck said that even if Ravnsborg were to resign before the trial, he believes the Senate will still act on the House impeachment charges and vote on barring Ravnsborg from holding future office.

The South Dakota Republican Party's state convention, where the party's nominee will be selected, starts the day after the impeachment trial is set to conclude.