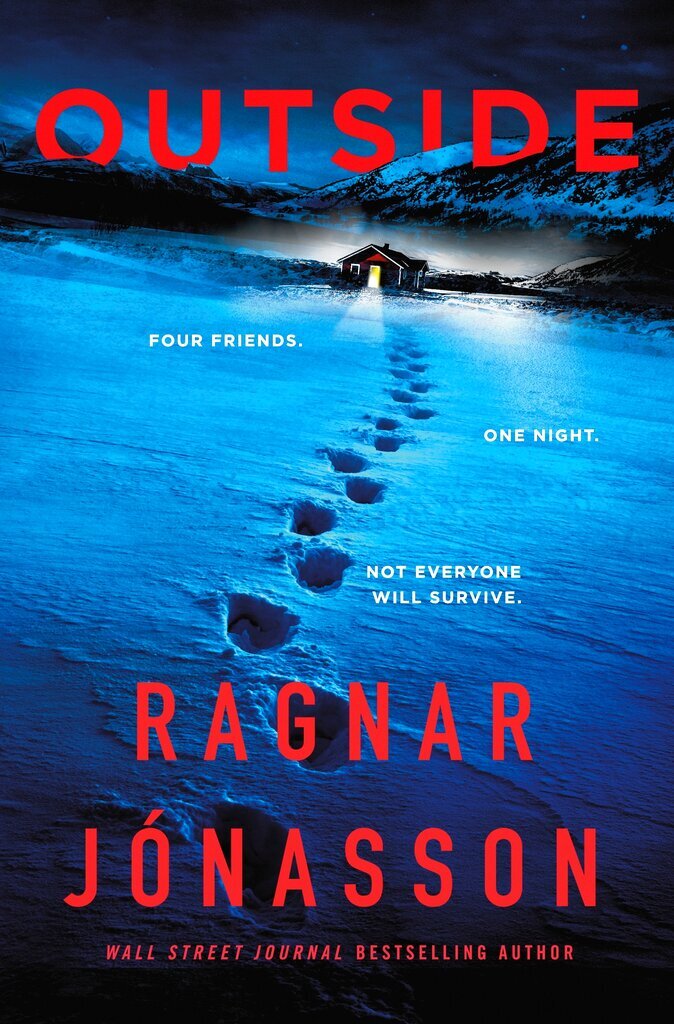 “Outside” by Ragnar Jonasson (Minotaur)

It’s reunion week in Iceland for Daniel, Armann, Gunnlaugur, and Helena, who were tight in college and like to get together every year or so to drink heavily and catch up.

They all have issues. Daniel has been lying about how poorly his acting career is going. Armann, owner of a multi-million-dollar travel-guide business, is a recovering drug addict. Gunnlaugur, an alcoholic lawyer who once got away with rape, is obsessed with Helena. And she, an engineer at a tech startup, is mourning the death of her boyfriend and thinks his so-called accident was actually a murder.

As “Outside” — Ragnar Jonasson’s ninth thriller translated from Islandic to English — opens, they gather expecting to party in the capital city of Reykjavik. However, Armann, the acknowledged leader of the group, makes a last minute change of plans. They will go ptarmigan hunting on the desolate moors of Iceland, even though most of them have scant experience with guns.

Armann checks the weather report before they set out, but as they trudge across the moors, nary a bird in sight, a blizzard screams out of the west, the snow so thick that they can see only a few feet in front of them. With his skills as a guide, he leads them to a derelict hunting cabin, but once inside, they discover they are not alone.

A man with a shotgun sits in a corner, a gun cradled in his arms. No matter how hard they try, can’t get him to speak a single word.

As the hours crawl by, the author gradually builds the tension. The occupants of the claustrophobic cabin have nothing but their clothes to keep them warm. Their cell phones aren’t working. Rescuers could never reach them anyway until the storm subsides.

And the armed stranger just stares in silence — for hours — as the blizzard rages.

The author alternates points of view, each of the four friends taking turns as their backstories are revealed and as they gradually discover that maybe they aren’t such great friends after all.

Jonasson and translator Victoria Cribb do a fine job of setting the scene, developing the characters, and keeping readers in suspense with a tight, clean, noir prose style.

“Somebody,” Helene says prophetically, “is going to end up dead before this trip is over.”

Bruce DeSilva, winner of the Mystery Writers of America’s Edgar Award, is the author of the Mulligan crime novels including “The Dread Line.”