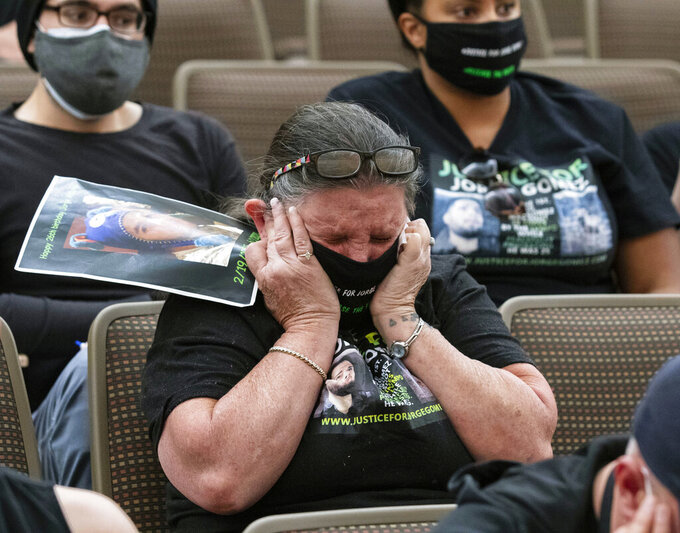 LAS VEGAS (AP) — Family members and vocal demonstrators in Las Vegas were left dissatisfied Friday by the investigation into the police killing of a man who carried guns and wore body armor while facing off with officers during racial justice street protests last June.

Bullhorn chants of “Justice for Jorge Gomez” from outside could be heard inside a hearing room while the lead investigator, Las Vegas police Detective Jason Leavitt, described video depicting a cascade of confusion before four veteran officers killed Jorge Antonio Gomez with 19 shots in less than three seconds.

Later, Gomez family attorney Rodolfo Gonzalez told reporters and about 50 supporters: “There was no evidence that Jorge raised a gun, and yet they killed him."

Race was not a theme but the chants outside the Clark County Government Center echoed unease in Minnesota surrounding the trial of a white Minneapolis police officer in the death of a black man, George Floyd, last May, and unrest following the shooting death by a white officer of a black motorist, Daunte Wright, last Sunday.

“Stop Killing Us!” the bullhorns said.

Gomez, 25, was fatally shot June 1 outside a downtown Las Vegas U.S. courthouse — wounded in the head, face, abdomen, hip, back, side, left hand and thigh — just moments after a Las Vegas police officer had been shot and gravely wounded amid protests farther down Las Vegas Boulevard.

Gomez was found to have three loaded handguns: one in a holster, one in a backpack and one slung from his shoulder in what Leavitt described as a conversion kit that made it resemble a rifle. The trigger on that gun had been pulled and the ammunition magazine was full, but evidence showed that Gomez did not fire a shot.

The weapons he openly carried, and his body armor, are legal in Nevada. The concealed weapon was not, Leavitt said.

The detective conceded during his description of drone's-eye-view images, social media scenes, security camera footage and witness accounts that there was no clear depiction of Gomez “leveling” a gun at officers.

But no officers on the courthouse steps or among those who shot at Gomez were wearing body cameras.

Instead, images from several vantage points showed a man in black with a rifle-style weapon at his side walk alone toward the well-lit courthouse steps. Officers move toward him. One fires shotgun “beanbag” shells at him. He runs, stumbles, gets up.

The four weren't patrol officers, and they weren't equipped with body cameras, Leavitt said. They had been summoned from administrative duties in a training detail to provide manpower after Officer Shay Mikalonis was shot in front of a casino on the Strip, about 3 miles (4.8 kilometers) away.

Mikalonis, 30, recently returned home after six months of medical and rehabilitation treatment. He is paralyzed from the neck down and breathes with the assistance of a ventilator.

Fryman, Emerton, Ferguson and Locher did not provide statements to investigators about their actions in Gomez's death.

During questioning by hearing ombudsman Joshua Tomsheck, Leavitt said investigators scouring Gomez's cellphones and social media found references to conspiracy theories but no evidence that he was part of an organized criminal conspiracy.

Leavitt was the only person to provide evidence during Friday’s non-judicial hearing. It was called after a preliminary finding by Clark County District Attorney Steve Wolfson that the officers who shot Gomez should not face criminal prosecution.

Officials said witness statements and evidence collected in the case — about 127 pages of material — would be made public through the county and police department.

After the hearing, Gonzalez stood with his client, Gomez's mother, Jeanne Llera, of Osceola, Florida, amid protesters wearing “Justice for Jorge Gomez” T-shirts.

Some displayed “Wanted” poster mock-ups with photos of Wolfson, the four officers who shot Gomez, and the officer who fired the shotgun “beanbag” rounds, John Squeo,

“We wish they would hold the officers accountable,” Gonzalez said. “The DA is supposed to do his job. He didn't do that.”

The public airing of information by prosecutors in a non-judicial proceeding is a procedure adopted in 2013 by Clark County as a compromise reform after police officers refused to testify in traditional coroner’s inquests because of concerns about civil liability.

The federal wrongful death lawsuit is pending in the Gomez case. It names the five officers, along with the Las Vegas Metropolitan Police Department.