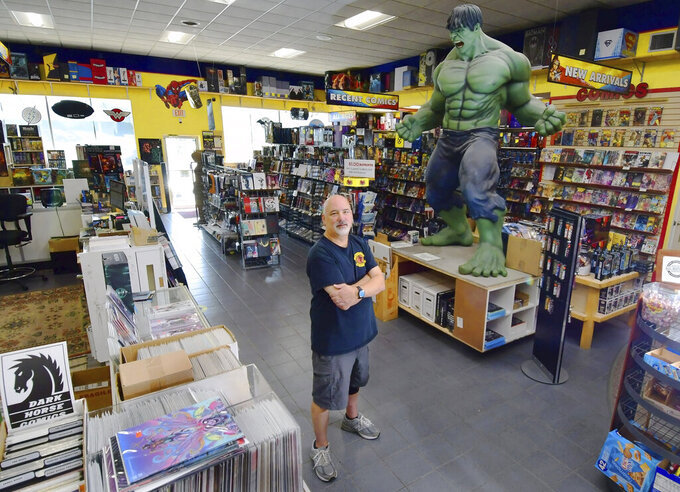 Ric Dugan, ASSOCIATED PRESS
Jon Cohen stands inside the Beyond Comics store in Frederick, Md., on Aug. 4, 2022. After 25 years in business, Cohen knows his regulars but aims to be just as welcoming and helpful to first-time visitors. The shop is all about spreading passion for comics and graphic novels as far as possible — for curious newbies, longtime fans and serious collectors alike. (Ric Dugan/The Frederick News-Post via AP)

FREDERICK, Md. (AP) — When Emily Kerr walks into Beyond Comics to pick up her subscriptions for the past two weeks, her order is waiting for her before she even makes it to the counter.

Shop owner Jon Cohen greets her by name and asks her how the kennel she works at is doing.

“It’s just it’s amazing that he can just retain all that information about his return customers,” Kerr said.

After 25 years in business, Cohen knows his regulars but aims to be just as welcoming and helpful to first-time visitors. The shop is all about spreading passion for comics and graphic novels as far as possible — for curious newbies, longtime fans and serious collectors alike.

Cohen opened the first branch of Beyond Comics in February 1997 at Lakeforest Mall in Gaithersburg. The store was 920 square feet and in a non-traditional location for a comic store. Most comic book stores are in “dungeons behind corners,” Cohen said — locations that offer the cheapest rent possible, he added. Cohen wanted a location that would help “legitimize” his store, as he put it.

Cohen noticed that many of his customers were driving in from Frederick, so he opened his Frederick store in 2007, which has become the flagship location.

Cohen put his own twist on the covers: They connect to create one image. He hopes to expand this image to a total of six comic book covers with various publishers, and all the covers will come together to make a poster.

Cohen had been in the comic book industry for 16 years when he opened his store. While working at a different store, he realized that the industry was missing stores that were more focused on comic and graphic novel content.

“My vision was bigger,” he said. “We named it Beyond Comics because we wanted people to understand that there’s way more to comics than just what you think there are. We felt that comics as a medium have way more to give than just collecting comic books.”

His store was one of the first to sell graphic novels, which Cohen said he recognized as a rapidly growing market in the ’90s.

Comics are usually released in a periodical fashion, where a new issue comes out regularly — weekly, biweekly, monthly, or anything in between. A subset of these comic books will go through a complete story arc, Cohen said.

Take “The Sandman,” which was adapted from the comic book series for the recent Netflix series. The series contains 75 issues, released over the course of 75 months. If a person wanted to read the full story, they would have to find every issue from 1989 to 1996.

Graphic novels, however, combine one story arc into a single book, rather than a series of issues. Graphic novels may also be fully original stories, including Raina Telgemeier’s “Smile” and Cece Bell’s “El Deafo.”

Graphic novels combine a few of the issues into one book that comprises one of the story arcs in the series. Instead of digging up all 75 issues, some of which are likely out of print, a reader can purchase the 10 graphic novels.

Graphic novels are also beneficial for collectors, who may not want to pull out their expensive or rare comic books and read them. Many comic collectors will buy expensive comics and store them in boxes or filing cabinets.

New Market resident Brian Alt started reading comic books when he was young and his grandmother bought them for him at flea markets. He began avidly collecting at 13 but took a break for a while when the store he used to frequent closed during the 1990 market crash, he said.

When Cohen opened his store in Lakeforest Mall, Alt started buying from him. In 2012, he got back into collecting. Since then, he is in the store every Wednesday, which is new comic book day.

His collection has grown to between 35,000 and 40,000, which he stores in a spare room in his townhome. To keep the older comics preserved, especially those that are on newsprint, Alt also purchased the graphic novels.

“The damage can be done, and these things are really becoming scarcer and scarcer, and more and more valuable ... so a lot of times I have graphic novels of entire collections that I have,” Alt said.

Beyond Comics has sold comics valued at $20,000 Cohen said. However, he doesn’t cater the store to collectors. Instead, he focuses on the average customer.

Cohen believes that women’s passion for graphic novels has been integral to the rise in popularity of his store. Just 20 or 30 years ago, Cohen recalls shop owners who would get angry if a woman came to their store.

When he opened the store, women were going to bookstores and reading novel-length content much more than they would read comic books, he said. He decided to design the store to seem like a bookstore, with many graphic novels at the front of the shop.

Robert Slick, who has collected comic books since he was a child in the 1970s, said he loved walking through the Frederick store. “The atmosphere is awesome — just walk in and look at his walls and marvel at what he has, as far as statues and everything else,” Slick said.

Cohen wants the store environment to be welcoming for everyone. He doesn’t want anyone to be “hit in the face with testosterone” when they enter the store, he joked.

Comic book culture has grown to encompass all kinds of people. If Cohen had worn a superhero shirt when he was in high school, he would have spent the day in his locker, he said. Things have changed because superhero stories have become so mainstream.

“You don’t have to be an outcast or introvert to read comics (anymore),” Cohen said.

TV shows and movies don’t help sell comic books and graphic novels since, most of the time, the content doesn’t match the storyline of a comic book, he said, but they do help legitimize the product.

When newcomers to comic-based content come into his store looking for the comic storyline that a Marvel film or TV show is based on, Cohen or one of the other staff members try to recommend something that they might enjoy. They aim to cater to everyone, not just hardcore collectors.

“If you (want) to make money and buy expensive back issues, great,” Cohen said. “But we’re just as happy, if not happier, when you come in and you buy your stack of comics and you read them and you come back and tell us, ‘Those were really good.’”