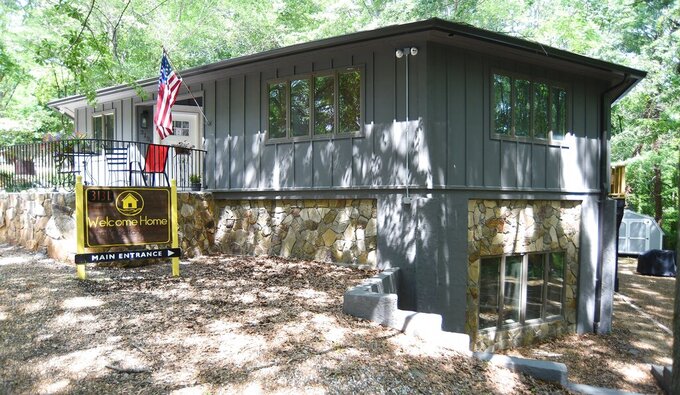 The cancer respite home, a house nicknamed “Little Blue” for its size and color, is one of two residences at Welcome Home of Chattanooga’s 5-acre property in East Chattanooga, on the aptly named Quiet Creek Trail.

The other home on the property houses hospice residents. Before the new property was acquired by the organization last year, Welcome Home provided hospice care at a rented a house in Brainerd.

Two of the respite home’s three bedrooms are occupied by single men. The other bedroom contains three twin beds to accommodate a young mom with two children.

“They were living in their car, and she’s trying to recover from brain cancer,” Campbell said.

She said treatments can be fatal to the unsheltered because they weaken the immune system.

“Chemo and radiation can make you feel really bad,” Campbell said. “So if you’re living outdoors and getting chemo on top of that — I just can’t imagine what that would be like.”

Campbell said most of the feedback she’s heard from the home’s first residents is that they are extremely grateful. They are also terrified of ending up on the streets again, and they are in need of reassurance that that won’t happen again.

“I want to make it clear that the people we serve, even in hospice, they are so resilient,” she said. “Just like us, they want to be free of suffering. They want to know that someone loves and cares for them. I think all humans are alike in that way.”

While living at Welcome Home, residents are free to do what they want as long as they aren’t bothering anyone else. They can stay up all night, sleep until noon and eat chocolate cake for lunch if that’s what they choose.

“They make their own choices about treatment or no treatment, about whether they’re going to smoke or not smoke,” Campbell said. “We try and respect people’s wishes.”

Michelle Goble, Welcome Home’s director of happiness, helps organize rides for residents from a group of volunteers known as the Go-Go Club to doctor appointments and on adventures like thrift store shopping and horseback riding.

One resident has taken up art since he moved in and spends most of his time painting.

“We’re thinking about a way to display his art for his birthday,” said Goble, pointing to a table covered in paintings.

He’s afraid his paintings will become a burden because “there’s not enough wall space,” Campbell said.

The patient has been living at Welcome Home for 11 months, which is longer than the average stay of six months for hospice residents, several of whom have actually gotten better and found permanent housing, Campbell said.

“It’s amazing what the power of having your basic needs met — shelter, food, but then also being reminded that you are loved and people do care about you — what that can do for your body,” Campbell said.

Another resident came to Welcome Home at age 80 after being diagnosed with lung cancer. He received cancer treatment after going for a second opinion when he was referred to hospice.

His cancer is now in remission, and he’s living the life of a bachelor in his own apartment. He can smoke and watch sports all day long, and he’s happier than he’s ever been, Campbell said.

“The cancer respite home is so important to me because I want our brothers and sisters who are living outdoors to be afforded the same luxuries that the rest of us have — to have a bed when they’re not feeling good, and when they’ve had a whole day of radiation, to be able to crawl in bed and watch Netflix all day and eat a bowl of ice cream and not be living in your car.”

Welcome Home plans to open a third home on the property this year and build two more next year, along with a village of small cottages within the next three years.

“The big plan is just to create this whole community of care and love and just a place of healing,” Campbell said.