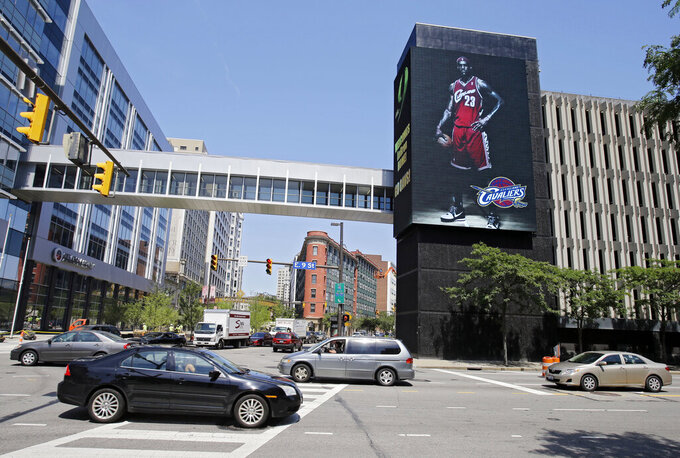 Timeline of the National Basketball Association during the 2010s to the NBA's 75th season. The timeline includes milestone moments in the league’s history and key moments off the court as the NBA celebrates its 75th season:

June 17, 2010: The Los Angeles Lakers beat the Boston Celtics 83-79 in Game 7 of the NBA Finals to win the title in a renewal of one of the greatest rivalries in team sports and their 12th Finals meeting. Phil Jackson adds to his record by coaching his 11th championship team. Kobe Bryant wins his fifth title and is named Finals MVP.

July 8, 2010: LeBron James ends weeks of speculation over his future by announcing his decision on an ESPN special that he has decided to leave Cleveland after seven years and join Dwyane Wade and Chris Bosh at the Miami Heat seeking his first championship.

May 3, 2011: Derrick Rose becomes the youngest MVP in NBA history at 22 years, 191 days old after leading Chicago to 62 wins. Five-time MVP Michael Jordan is the only other Chicago player to win MVP.

July 1, 2011: A 161-day lockout begins, eliminating the preseason and trimming the regular season from 82 to 66 games. It ends on Dec. 8 after players and owners come to agreements on revenue sharing and the salary cap. The season begins on Dec. 25.

Aug. 12, 2012: The Americans win their second straight Olympic gold medal in men's basketball. After winning by an average margin of victory of 32.1 points a game, the U.S. gets 30 points from Kevin Durant to beat Spain 107-100 for gold in London.

Oct. 29, 2012: Superstorm Sandy hits New Jersey, New York and parts of Connecticut after merging with other storm systems. Sandy becomes one of the costliest storms in U.S. history, flooding 36,000 homes, killing 72 in the eastern United States and causing $62.5 billion damage.

Dec. 14, 2012: Twenty first graders and six educators are shot to death at Sandy Hook Elementary School in Newtown, Connecticut. Adam Lanza, 20, killed his mother at their home before going to the school. He kills himself with a handgun as police arrive.

April 15, 2013: Two bombs go off near the finish line of the Boston Marathon, killing three and wounding more than 260. Police arrest Dzhokhar Tsarnaev, 19, while his older brother Tamerlan Tsarnaev, 26, dies after a shootout with authorities.

June 18, 2013: Ray Allen knocks down a 3-pointer with 5.2 seconds left in the fourth quarter, capping Miami's rally from 10 points down in the quarter and forcing overtime in Game 6 of the NBA Finals against the San Antonio Spurs. The Heat win 103-100 in overtime. The Heat win Game 7 two days later for their second straight championship.

July 2013: Alicia Garza, Patrisse Cullors and Opal Tometi start Black Lives Matter as a social media hashtag following the acquittal on July 13 of George Zimmerman in the shooting death of Trayvon Martin. The group grows and now has chapters throughout the U.S. and in Britain and Canada fighting against white supremacy, police brutality and systemic racism.

Oct. 30, 2013: Allen Iverson announces his retirement nearly four years after his last NBA game after a second stint with the Philadelphia 76ers. He wound up playing 14 years and finished 19th on the career scoring list with 24,368 points.

May 6, 2014: Oklahoma City's Kevin Durant is named league MVP. His run of 41 consecutive games with at least 25 points helps him pull away from the field. During his acceptance speech, he famously calls his mother “the real MVP.”

June 15, 2014: This time, the San Antonio Spurs close out the Miami Heat in the NBA Finals in five games for their fifth championship.

July 11, 2014: LeBron James returns to the Cleveland Cavaliers as a free agent after four seasons with the Miami Heat.

Nov. 29, 2015: Kobe Bryant, 37, announces in a post titled “Dear Basketball” on The Players' Tribune that his 20th NBA season will be his last. It amounts to a farewell tour, and he is showered with love throughout the season. He retires as the NBA's third-leading scorer all-time.

June 4, 2015: Stephen Curry and the Golden State Warriors tip off Game 1 of the NBA Finals against LeBron James and the Cleveland Cavaliers. It's the first of four straight Finals between the teams. The Warriors win the franchise's fourth championship by claiming the series 4-2.

June 26, 2015: Same-sex couples win the right to marry with the Supreme Court's 5-4 ruling in the civil rights case.

May 10, 2016: Golden State's Stephen Curry repeats as league MVP and is the first unanimous winner in league history.

June 19, 2016: The record-setting Warriors fall in seven games in the NBA Finals. LeBron James and the Cleveland Cavaliers become the first team to rally and win after trailing 3-1, ending the city of Cleveland's 42-year championship drought.

July 4, 2016: Four-time scoring champ Kevin Durant decides to leave the Oklahoma City Thunder and join the Golden State Warriors, sending tremors through the NBA. The Warriors had rallied from a 3-1 deficit to beat the Thunder in the Western Conference Finals. Angry Oklahoma City fans call their once beloved hero a traitor for joining their top rival.

July 11, 2016: Tim Duncan announces his retirement after five championships with the San Antonio Spurs and 19 NBA seasons after being the only player to win titles in three different decades. Duncan joins Kareem Abdul-Jabbar and Robert Parish as the only players to win at least 1,000 games in their careers.

Nov. 2, 2016: The Chicago Cubs end the longest drought in baseball by beating the then-Cleveland Indians in the 10th inning of Game 7. The Cubs trailed 3-1 before rallying to win three straight for their first title since 1908.

April 8, 2017: Oklahoma City's Russell Westbrook joins Oscar Robertson as the only players in NBA history to average a triple-double for a season. Westbrook secured the mark in a loss to Phoenix but finishes the season averaging 31.6 points, 10.7 rebounds and 10.4 assists.

April 9, 2017: Oklahoma City's Russell Westbrook breaks Oscar Robertson's single-season record for triple-doubles with his 42nd. He has 50 points, 16 rebounds and 10 assists and hits a deep game-winning 3-pointer in Denver to eliminate the Nuggets from playoff contention.

Aug. 25, 2017: Hurricane Harvey smashes into Texas as a Category 4 storm and the fiercest to hit the U.S. in more than a decade. The storm kills 68 and causes an estimated $125 billion in damage in Texas.

Dec. 18, 2019: President Trump is impeached on charges of abuse of power and obstruction of Congress. He becomes the fourth U.S. president impeached, joining Andrew Johnson, Richard Nixon and Bill Clinton.

Jan. 26, 2020: Kobe Bryant, his 13-year-old daughter and seven others are killed in a helicopter crash on a steep hillside in dense morning fog in Southern California. Bryant's death at 41 shocks the sports and entertainment worlds.

March 12, 2020: The NBA suspends the season “until further notice” after Rudy Gobert of the Utah Jazz tests positive for the coronavirus. The move comes hours after the majority of the league’s owners were leaning toward playing games without fans in arenas.

July 30, 2020: The NBA restarts the season in a bubble against the coronavirus pandemic inside the Disney complex.

Aug. 26, 2020: NBA players walk out on playoff games inside the league’s bubble, upset over racial injustice and the shooting of Jacob Blake, a Black man, by police in Kenosha, Wisconsin. Two more days of games also are postponed while players wrestle with emotions about wanting to bring change in their communities.

Oct. 11, 2020: The Los Angeles Lakers win the franchise's first title in a decade, beating the Miami Heat in six games wrapping up three months in an NBA bubble at Walt Disney World designed to keep inhabitants safe from the coronavirus. LeBron James and Danny Green join John Salley and Robert Horry as the only players to win titles with three different franchises.

Jan. 6, 2021: Violent pro-Trump loyalists storm the U.S. Capitol, egged on by President Trump’s calls for them to “fight like hell” against the election results. Lawmakers are forced into hiding in a stunning attempt to overturn America’s presidential election.

Jan. 14, 2021: President Donald Trump is impeached for the second time, charged with “incitement of insurrection” over the deadly mob siege of the Capitol in a swift and stunning collapse of his final days in office.

July 20, 2021: Giannis Antetokounmpo scores 50 points and grabs 14 rebounds with five blocked shots leading the Milwaukee Bucks to a 105-98 win over the Phoenix Suns, clinching the franchise's first NBA title in 50 years. The Bucks take the NBA Finals 4-2 in a series played before fans after the bubble of 2020.

Aug. 7, 2021: Kevin Durant leads the U.S. to another gold medal. He scores 29 points as the Americans beat France 87-82 at the Tokyo Olympics, postponed a year because of the coronavirus pandemic.