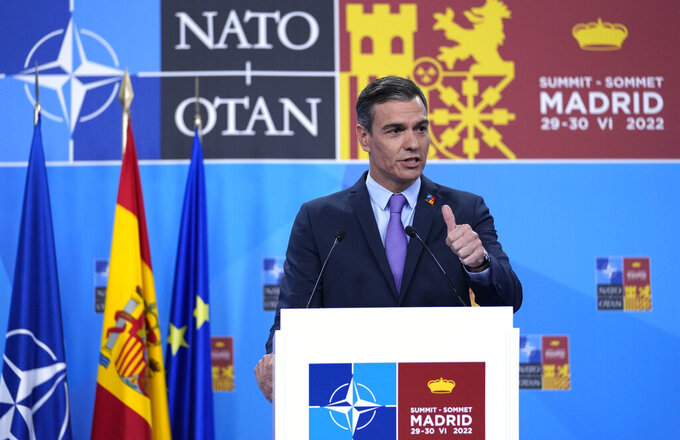 BARCELONA, Spain (AP) — Spain is increasing military spending as it works toward meeting a NATO commitment by dedicating 2% of gross domestic product to defense, the government said Tuesday.

Cabinet members approved a one-off expenditure of almost 1 billion euros (around $1.04 billion) for Spain's Defense Ministry that the government said was needed to cover unexpected expenses produced by Russia’s invasion of Ukraine.

Spain has sent military and humanitarian aid to Ukraine, and deployed more troops and aircraft to NATO missions in Eastern Europe.

NATO leaders agreed at a summit held in Madrid last week to expand their efforts to get all alliance members up to the 2% of GDP mark. Currently, only nine of the Western military alliance's 30 members meet or surpass that goal.

Spain pledged at a NATO summit held in Madrid last week that it would reach the 2% of GDP goal by 2029. That would mean doubling its budget for military spending from the current 13 billion euros ($13.4 billion) to 26 billion euros ($27 billion) in seven years.

Spain currently spends 1% of its GDP on defense. Only Luxembourg spends a lower percentage of GDP on defense than Spain in the North Atlantic alliance, according to NATO.

The U.S., which provides the bulk of NATO forces, has had a long-standing complaint that several of its European allies don’t pitch it enough. Spain, for example, has tried to compensate for underspending by contributing troops, planes and ships to NATO missions.

Russia’s invasion of Ukraine in February has sparked a rearmament movement across many European countries. Germany, which until now has only spent 1.4% of its GDP on defense, has approved a 100 billion-euro ($107 billion) special fund to strengthen the country’s military.

NATO Secretary-General Jens Stoltenberg said at last week’s summit that the allies have reaffirmed their commitment to the 2% minimum. He said that 19 members have pledged to meet it by 2024, with the remaining five, including Spain, to then follow.

“Two percent is increasingly considered a floor, not a ceiling,” Stoltenberg said at the summit where NATO declared Russia as its top threat and described China’s growing military ambitions as a “challenge.”

Spain's decision designed to show NATO that it is serious about spending more on its armed forces risks causing friction within its left-wing governing coalition, which doesn't hold a majority in parliament.

The government’s junior member, United We Can, is firmly opposed more spending on the military sought by Socialist Prime Minister Pedro Sánchez. The left-wing party has called for a meeting of the coalition to discuss its spending priorities.

Government spokeswoman Isabel Rodríguez said after the Cabinet meeting that the military funding approved Tuesday was adopted "as part of our commitment to a clear and firm response to (the) invasion of Ukraine and to meet the extraordinary costs for our armed forces created by the war.”

Follow all of AP's coverage of NATO at https://apnews.com/hub/nato