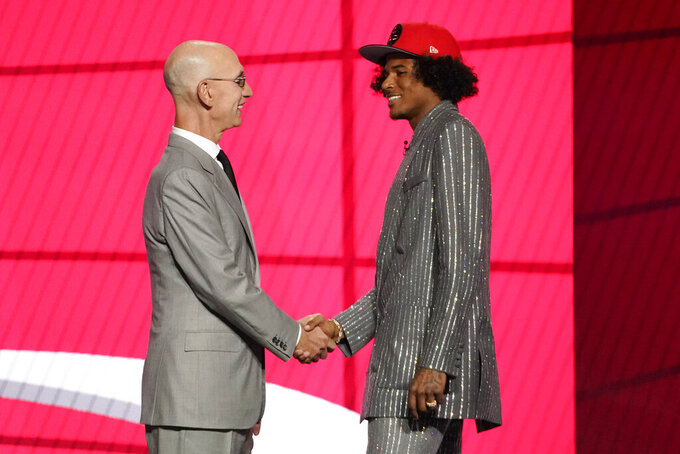 Corey Sipkin, ASSOCIATED PRESS
NBA Commissioner Adam Silver greets Jalen Green after he was selected by the Houston Rockets as the second pick during the first round of the NBA basketball draft, Thursday, July 29, 2021, in New York. (AP Photo/Corey Sipkin)

HOUSTON (AP) — Houston general manager Rafael Stone wouldn't even hazard a guess of how good of an NBA player Jalen Green will be.

He is, however, certain that he'll give everything he has to reach his full potential.

“Clearly we think he can be a special player," Stone said. “Exactly how that plays out or the exact timing of everything else I just don’t know ... but in terms of his path, the only thing I ask is that we get absolutely the utmost effort and I’m confident that we will."

The Rockets selected Green with the second overall pick in Thursday night’s NBA draft. He joins a team that is rebuilding after sinking to an NBA-worst 17-55 last season after James Harden forced a trade to Brooklyn to end a streak of eight consecutive playoff trips.

The shooting guard comes to the Rockets after going straight from high school in California to the NBA G-League. The 6-foot-6, 186-pound Green averaged 17.9 points, 4.1 rebounds and 2.8 assists a game for the Ignite last season.

“Jalen is a uniquely blessed guy," Stone said. “He’s a transcendent athlete. Normally people that athletic aren’t as skilled because they can just rely on their athleticism. And so we think that that combination of things and tools just makes him an extraordinarily exciting prospect."

Green is Houston’s first first-round pick since the Rockets selected Sam Dekker with the 18th pick in 2015 and their highest pick since they took Yao Ming first overall in 2002.

Green did not shy away from the pressure of being a high draft pick and said he is excited about being the centerpiece of the Rockets in the post-Harden era.

“I can be that piece," he said. “I think I can bring that dog mentality, that defensive mindset ... they already got a lot of star players, a lot of excitement on the team. I think they’re just missing one more piece and I think I can fulfill that."

He believes his work in the G-League will help him make a smooth transition to the NBA.

“I learned so much, I think I grew up so much, I learned about myself, got a lot of knowledge on and off the court," he said.

The 19-year-old was a McDonald’s All-American in 2020 after averaging 31.5 points, 7.5 rebounds and five assists a game as a high school senior at Prolific Prep.

The Rockets dealt one of their last remaining veterans in March when they traded P.J. Tucker to Milwaukee in a swap that netted Houston the No. 24 pick in this year’s draft. Houston nabbed Arizona State shooting guard Josh Christopher with that pick.

Christopher was also a McDonald's All-American in 2020, but was limited to just 15 games in one season with the Sun Devils because of injuries. Christopher, who Stone called “dynamic," averaged 14.3 points per game, 4.7 rebounds per game and 1.4 assists per game at Arizona State.

Houston had back-to-back picks late in the first round as they selected Usman Garuba with 23rd pick, which the team got from Portland in a trade for Robert Covington in 2020.

The 19-year-old Garuba was born and raised in Spain and spent last season playing for Real Madrid where the power forward/center was awarded the Euroleague's Rising Star trophy, given to the top player under age 22.

The Rockets added a fourth player Thursday night when they acquired Alperen Sengun in a trade after he was drafted at No. 16 by the Thunder. The center from Turkey has played there professionally since 2018 and was named MVP of his league this season after averaging 19.2 points, 9.4 rebounds and 2.5 assists.

It’s the first draft for Stone, who was promoted from within the organization after Daryl Morey stepped down to take a job with the Philadelphia 76ers in October.