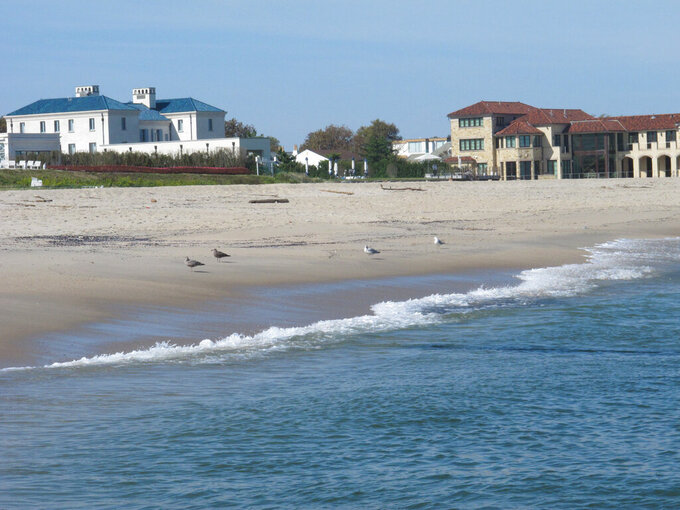 DEAL, N.J. (AP) — A Jersey Shore town with a long history of trying to discourage outsiders from using its beaches is about to get millions of dollars worth of new sand, paid for by federal and New Jersey taxpayers.

U.S. Rep Frank Pallone Jr., a Democrat, said Monday the U.S. Army Corps of Engineers will conduct beach replenishment in three towns in November, including Deal. The federal government is paying 65%, or $17 million, of the $26 million project.

Beach access advocates say Deal has one of the worst records of any Jersey Shore town when it comes to requirements that the state's beaches be open and accessible to all. And there is an explicit requirement that towns that accept publicly paid-for sand as part of beach replenishment comply with public beach access rules, including providing adequate public parking within a reasonable distance.

Deal has tried numerous times to enact laws that would allow only residents of some streets closest to the beach to park there during the summer, and it is being sued by a coastal advocacy group fighting its sale to a neighboring homeowner of a street end used by surfers and others to get onto the beach.

“They keep wanting the public money to fix their beaches, but they don't want the public to use those beaches,” said Jeff Tittel, former director of the New Jersey Sierra Club and a longtime beach access advocate.

“When the beaches are enlarged, it is only natural that more people will tend to visit the beach, park nearby and need adequate access,” added Andrew Chambarry, an attorney who has fought Deal several times on beach access issues. “In Deal, the beachfront residents near these widened beaches have complained about the influx of people to their elected leaders, causing restrictive ordinances and parking measures to be introduced."

As recently as June, Deal, located just north of Asbury Park, tried to enact an ordinance that would limit parking on several streets nearest the beach to residents only, but then backed off. That is one of several times it has proposed such a law only to abandon the effort.

It previously toyed with selling parking permits for streets near the beach for $100 a piece before backing down, and it would ticket or arrest surfers before a court decision ended the practice.

A message seeking comment that was sent to Mayor Sam Cohen was not immediately returned Monday.

The project will pump 1.1 million cubic yards of sand — the equivalent of more than 100,000 dump trucks worth— onto beaches in Deal, Allenhurst and Loch Arbour.

“Why are we rewarding towns like Deal and Loch Arbour, who between the two tried to restrict public access to these publicly paid-for beaches five times since the last replenishment?" asked John Weber, a Bradley Beach councilman and an official of the Surfrider Foundation, which has fought to defend public beach access.

Tim Dillingham, executive director of the American Littoral Society, which is suing Deal to try to block the sale of the oceanfront street end, said, “there needs to be a rigorous examination of public access in the towns which are receiving this new round of taxpayer supported beach nourishment.”

Pallone said each town that accepts federal funding for beach replenishment is required to provide the state with a public access plan "to ensure that everyone is able to enjoy our state’s beaches.”