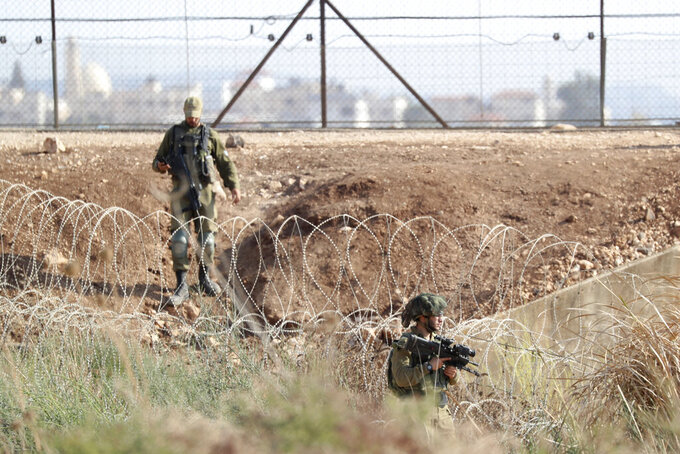 Ariel Schalit, ASSOCIATED PRESS
FILE - In this Sept. 12, 2021, file photo, Israeli soldiers take positions along the border between the northern West Bank near Jenin and Israel as they search for two Palestinians who broke out of a maximum-security prison last week, on a road leading to the West Bank town of Jenin, near Gan Ner Israel. The last two of six Palestinian prisoners who escaped a maximum-security Israeli prison two weeks ago were rearrested early Sunday, Sept. 19, the Israeli military said. (AP Photo/Ariel Schalit, File)

TEL AVIV, Israel (AP) — Israel on Wednesday reopened a crossing with the occupied West Bank for the first time since six prisoners tunneled out of a nearby Israeli prison, a rare escape that triggered a massive search before they were all recaptured.

The Israeli military body that oversees civilian affairs in the West Bank said the Jalameh crossing into the northern West Bank would be open for the first time since Sept. 6, when the prisoners escaped.

Six prisoners — five of them accused of deadly attacks against Israelis — tunneled out of Gilboa prison in northern Israel through a shaft in the floor of their bathroom in the biggest jailbreak of its kind in decades. They later split up into groups of two, and the final pair were apprehended over the weekend in the occupied West Bank town of Jenin.

The incident marked an embarrassing security breach for Israel and sparked a massive manhunt in northern Israel and the occupied West Bank. Lawyers for two of the prisoners said they were beaten during their arrest.

Palestinians consider prisoners held by Israel to be heroes of their national cause, and many celebrated the escape on social media.