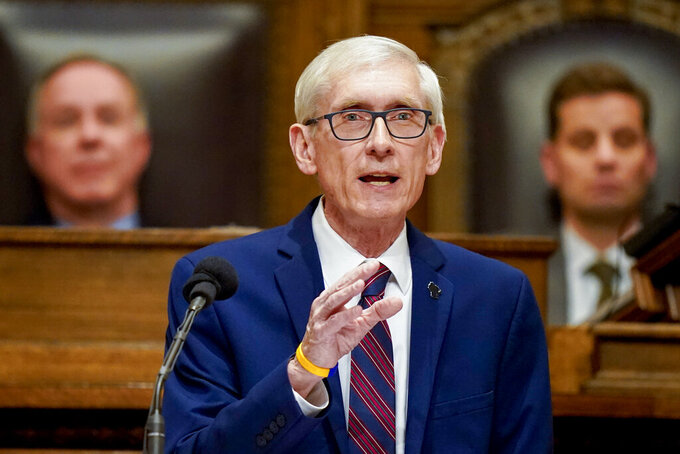 Andy Manis, ASSOCIATED PRESS
FILE - Wisconsin Gov. Tony Evers addresses a joint session of the Legislature in the Assembly chambers during the governor's State of the State speech at the state Capitol onn Tuesday, Feb. 15, 2022, in Madison, Wis. Wisconsin's Democratic governor told the state Supreme Court on Thursday, March 24, that it should allow him to submit additional evidence defending his legislative district boundary map that the U.S. Supreme Court rejected, arguing it is still better than the one submitted by the Republican Legislature.(AP Photo/Andy Manis, File)

MADISON, Wis. (AP) — Gov. Tony Evers vetoed a bill Thursday that would have defined a riot and created new penalties for attending or participating such a gathering.

Republican lawmakers introduced the bill in April 2021 in response to chaotic protests against police brutality in Kenosha in 2020. The protests began after a white police officer shot Jacob Blake, a Black man, during a domestic disturbance. The shooting left Blake paralyzed.

The bill would have defined a riot as a public disturbance that involves an unlawful assembly and an act of violence or a threat of violence committed by at least one person.

Evers said in his veto message that it's already a crime to refuse to withdraw from an unlawful assembly after being ordered by police to disperse. He added that the bill could be used to infringe on free speech rights.

The governor also vetoed another Republican bill on Thursday that would have required Madison and Milwaukee's police and firefighter oversight commissions to add union nominees. The governor said in his veto message the bill would erode local control.