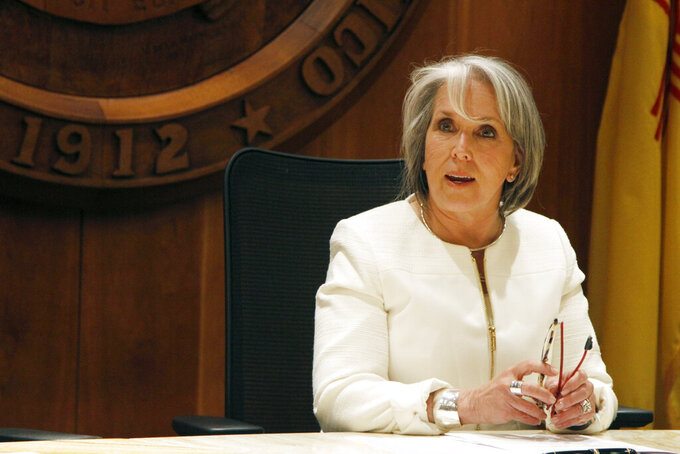 Morgan Lee, ASSOCIATED PRESS
New Mexico Gov. Michelle Lujan Grisham announces an executive order aimed at ensuring safe harbor to people seeking abortions or providing abortions at health care facilities within the state, at a news conference in Santa Fe, N.M., on Monday, June 27, 2022. After the U.S. Supreme Court overturned the Roe v. Wade decision and ended constitutional protection for abortion, the battle over abortion rights has shifted to lower courts around the country, as one side sought quickly to put statewide bans into effect and the other tried to stop or at least delay such measures. (AP Photo/Morgan Lee)

SANTA FE, N.M. (AP) — New Mexico residents who say they endured constitutional rights violations, depression and anxiety under aggressive public health restrictions during the coronavirus outbreak have abandoned a lawsuit against Democratic Gov. Michelle Lujan Grisham after most allegations were dismissed by a judge.

The move came after a string of adverse rulings in state and federal courts for plaintiffs in several lawsuits that challenged the authority of the Democratic governor and state health officials to impose public health restrictions, such as mask mandates, that were phased out earlier this year.

New Mexico imposed some of the most aggressive public health restrictions in the U.S. during the pandemic — mandating face masks, halting in-person activity at nonessential businesses and allowing public schools to suspend in-person classroom teaching for about a year. The orders withstood repeated legal challenges.

Attorney Jonathan Diener said Tuesday that a dozen plaintiffs dropped their lawsuit against Lujan Grisham and state health officials after a federal magistrate judge last week dismissed most of their claims.

The plaintiffs included a pet food business in Rio Rancho, a martial arts studio in Bernalillo, a restaurant in Silver City and a member of an Albuquerque-based megachurch. The lawsuit sought to limit future public health emergency declarations.

Diener said the lawsuit no longer appeared viable, though the federal judge had allowed claims to move forward about possible infringements on religious freedoms during the state's initial shutdown of in-person gatherings at churches and other places of worship.

One plaintiff, a member of the Albuquerque-based Calvery Chapel, alleged that she was denied expression of her religious beliefs and that she suffered depression and anxiety set in from social isolation during the pandemic.

Three lawsuits against Lujan Grisham and her public health orders are still pending in U.S. District Court in Albuquerque and the 10th U.S. Circuit Court of Appeals in Denver.

The New Mexico Supreme Court in August 2020 affirmed the authority of the state health secretary to restrict or close businesses because of the coronavirus pandemic, rejecting assertions that a temporary ban on indoor dining services was arbitrary and capricious.

In June 2021, the state's top court ruled that there is no constitutional or statutory requirement to compensate businesses for financial losses caused by emergency public health orders.

Allegations of economic hardship under the orders were blunted somewhat by billions of dollars in federal and state aid that was funneled to New Mexico residents and businesses to sustain payrolls and unemployment payments without corresponding tax increases.

The New Mexico Supreme Court also has ruled that the Legislature was allowed to restrict in-person access to the state Capitol due to the pandemic.