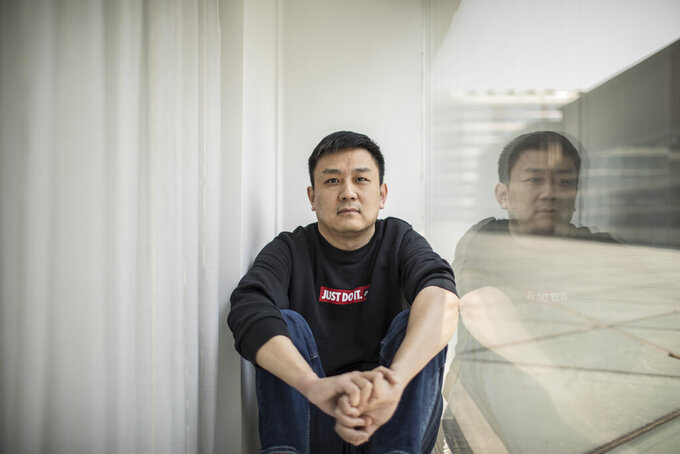 Uncredited, ASSOCIATED PRESS
FILE - U.S. citizen Daniel Hsu poses for a portrait in the apartment in Shanghai, China, April 13, 2020. Hsu, a U.S. citizen, fought for four years to escape China. The Seattle resident was barred from leaving despite having committed no crime, a pawn in a geopolitical game between two giant superpowers. Then earlier this month, just four days before the virtual meeting between President Joe Biden and Chinese leader Xi Jinping, Hsu was told to prepare to go home. He had less than 48 hours. (AP Photo, File)

The Seattle resident was barred from leaving despite having committed no crime, a pawn in a geopolitical game between two giant superpowers.

Then earlier this month, just four days before a virtual meeting between President Joe Biden and Chinese leader Xi Jinping, Hsu was told to prepare to go home. He had less than 48 hours.

“It was a total rush,” he told The Associated Press in a telephone interview from his home in Seattle.

As he raced to visit his grandmother, pack his things and travel to Guangzhou, Hsu knew nothing of the horse-trading going on between China and the U.S. in the build-up to the three-plus hour video meeting between Biden and Xi on Nov. 15.

Both countries appeared to be trying to dial back tensions in their increasingly fractious relationship, and Hsu had become a bargaining chip. He could return to Seattle, and seven Chinese nationals who were convicted of crimes in the U.S. would be sent back to China.

China’s ability to make deals by effectively taking people like Hsu hostage has raised concerns that Beijing may feel emboldened to double down on the practice, which has angered not only the U.S. but also Canada, Australia and a number of European countries who say their citizens have also faced arbitrary detention in China.

“There’s no deterrent imposed on Beijing to doing it again,” said Sophie Richardson, China Director at Human Rights Watch. “The problem is if you took the truly principled road, a lot of people would still be sitting in arbitrary detention in China.”

A U.S. official who was knowledgeable about the administration’s talks with Beijing regarding Hsu told AP that Hsu was not a “deliverable” for the Biden-Xi meeting and that what looked to some like a prisoner exchange was not actually a prisoner exchange, but rather the product of long – and continuing – efforts to get Beijing to live up to its international obligations. The official wasn’t authorized to comment publicly and spoke on the condition of anonymity.

“The PRC should never have subjected U.S. citizens to coercive exit bans. The PRC had been failing to meet its international obligations to take back their nationals who have been ordered removed,” the official said, using the acronym for the People’s Republic of China. “There are additional Americans subject to exit bans and arbitrary detentions in the PRC, and we will continue to work to secure their release.”

In Beijing, Chinese Foreign Ministry spokesperson Zhao Lijian said he wasn’t clear on the details of Hsu’s case, but that China handled such matters according to established rules.

“I would like to emphasize that all are equal under the law and the relevant Chinese organs handle such matters in accordance with the law and regulations,” Zhao said at a daily briefing on Wednesday. “In the carrying out of such duties, there is no tolerance for interference, slander or distortion.”

Hsu told the AP that he was effectively held hostage by Chinese authorities seeking to convince his father to return to China and face justice for allegedly embezzling roughly $63,000 over 20 years ago, when he was chairman of a government real estate company. Hsu’s father has said he is innocent and the target of a political vendetta.

From August 2017 until February 2018, Hsu was held in solitary confinement in Hefei, the capital of Anhui province. The walls in his beige room were covered in rubber, Hsu told the AP in a 2020 interview. The table was wrapped in soft, gray leather. White blinds covered two barred windows. There were no sharp edges.

Five surveillance cameras recorded his movements, and two guards kept constant, silent watch. They followed Hsu to the shower and stood beside him at the toilet.

Lights blazed through the night. If he rolled over on his mattress, guards woke him and made him turn his face toward a surveillance camera that recorded him as he slept.

When he was released from the so-called education center, he was subject to an exit ban and barred from leaving China. Under Chinese law, authorities have broad discretion to block both Chinese citizens and foreign nationals from leaving the country. The U.S., Canada, Australia and the U.K. have issued advisories warning their citizens they can be prevented from leaving China arbitrarily, even over disputes they may not be directly involved in.

Hsu’s is not the first case of hostage diplomacy involving China.

In September, an agreement was reached to allow Meng Wanzhou, a senior executive at Chinese technology giant Huawei, to return home from Canada after a three-year diplomatic standoff. Meng had faced a U.S. extradition request on charges of fraud for allegedly misrepresenting the company’s business dealings with Iran.

Within hours of Meng’s release, Beijing freed two Canadians who had been detained in China on national security charges shortly after Meng’s arrest in Canada. China’s Foreign Ministry said at the time the Canadians were released for health reasons and downplayed any connection with Meng’s case. Canada has long maintained that the men are innocent.

The next day, two American siblings who -- like Hsu -- had been blocked from leaving China for years in an apparent effort to coerce their father to return to China, returned to the United States.

Hsu’s luck didn’t change until the weeks leading up to the November video conference. Hsu said he got a call from the U.S. Embassy in Beijing four days before Xi and Biden spoke, on the afternoon of Thursday, Nov. 11. He was instructed to get to Guangzhou, a southern Chinese megacity about 900 miles from his apartment in Shanghai, in time for a charter flight home early that Sunday morning.

He went to see his 103-year-old grandmother, who lives in Shanghai. She cried when he told her he was leaving. “I could tell she was wondering if she’d see me again,” he said.

Hsu had never told her about his exit ban because he worried for her health. He never told her about his six months in solitary confinement. Or the fact that his wife – also innocent of any crime – had also been blocked from leaving China until last year, for reasons that were never clear to them. As a consequence, their teenage daughter was effectively orphaned for nearly three years, living on her own in their big, empty house in Seattle.

Sunday morning, Nov. 14, dawned in Guangzhou with a rare and glorious blue sky, and the sunshine seemed to match Hsu’s mood. At the airport, he walked across the tarmac toward a waiting Gulfstream 5 jet – the plane that would finally carry him home.

Hsu said he saw seven people disembark, though he didn’t know who they were.

Only one of them -- Xu Guojun, a former Chinese bank executive, now bald and wearing baggy camouflage pants -- was in handcuffs. A pair of police clad in hooded white hazmat suits, with goggles, facemasks, blue gloves and blue booties escorted him off the plane.

Xu had fled China in 2001 after being accused of embezzling hundreds of millions of dollars. China’s Central Commission for Discipline Inspection put out a statement trumpeting Xu’s return to the motherland as a “major achievement” in China’s global anti-corruption fight, which has intensified under Xi Jinping.

A federal court in Las Vegas sentenced the former Bank of China manager on conspiracy charges in 2009 and ordered him and his co-conspirators to pay $482 million in restitution. He spent nearly 13 years in U.S. prison, according to the Department of Homeland Security.

Two of the other returnees – Zhang Yujing and Lu Jing – tried to enter Mar-a-Lago in 2019. Zhang was sentenced to eight months for trespassing and lying to federal agents, while Lu was sentenced to 59 days for resisting arrest, according to DHS. Two others – Wang Yuhao and Zhang Jielun – were convicted of illegally photographing a naval air station in Key West, Fla., in 2020. The final pair – Sun Yong and Tang Junliang – had been convicted of financial crimes in Utah, according to DHS and Justice Department records.

And then it was Hsu’s turn. He walked up ten boarding stairs onto the plane. He had a single suitcase and one carry on.

“I felt like I was already on U.S. soil. That was really a relief,” Hsu said. “I took a deep breath when I sat down in my chair.”

In Phoenix, he switched to a commercial flight, which was delayed by nearly three hours. As Biden and Xi spoke of Taiwan, trade, climate change and the mutual need to avoid conflict, Hsu paced the Phoenix airport, exhausted and aimless. “I tried to read a book or read something on my phone, I just can’t,” Hsu said. “I couldn’t focus on anything. I couldn’t wait to see my wife.”

Finally, at nearly 10 p.m. local time, Hsu touched down at Seattle-Tacoma International Airport. A representative from the Office of the Special Presidential Envoy for Hostage Affairs was waiting for him. So was his wife, Jodie Chen.

Thanksgiving this year promises to be a massive improvement on the holiday four years ago, which Hsu said he celebrated in solitary confinement in Hefei. He said he managed to convince his minders there to bring him a special meal of Kentucky Fried Chicken.

Hsu said he is grateful to everyone who worked behind the scenes to bring him home. He said he is happy to be in a free country but thinks often about his relatives. “I hope all is well with my family in China,” he said.

His final departure was so sudden, Hsu said he hasn’t had time to think about what comes next, beyond trying to recapture time with his family and get back to the life and the freedom that he lost.