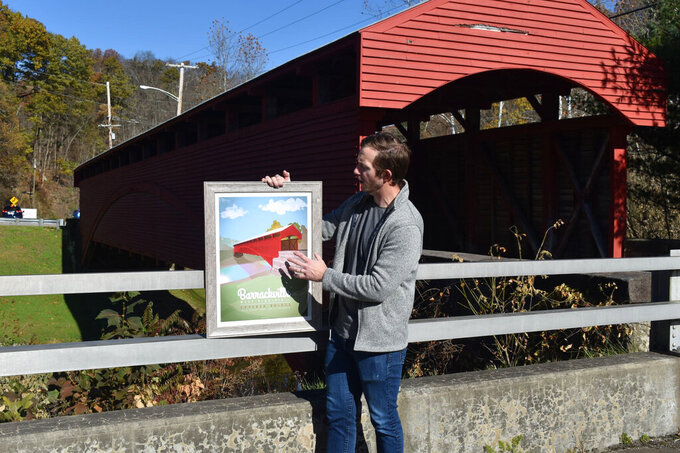 David Kirk, ASSOCIATED PRESS
Graham Curry holds his poster of the covered bridge next to the bridge itself on Nov. 9, 2021, in Barrackville, W.Va. The West Virginia artist is helping to restore the bridge. (David Kirk/Times-West Virginian via AP)

“(The bridge) is kind of something that is associated with the town... it reflects the life and vibrance of the town,” Curry said. “But when you drive past (the bridge), you don’t know it’s in desperate need of repair, but it is.”

A year ago, Curry had no clue that the bridge was in need of repairs and, like many of the town’s residents, he wanted to capture a picture of the landmark, but in his own style.

An expert in both hand drawn and digital art, Curry crafted a poster of what he thought could be a town logo with the covered bridge being the center piece.

Just around the same time he was creating his poster, he found a Facebook group dedicated to preserving the covered bridge — a stroke of serendipity that connected Curry to the cause.

“They’re trying to raise funds to preserve it, to improve it, but also to save it,” Curry said. “I reached out to the admin of the page and asked a few questions and they invited me to their next meeting, that’s when I presented the poster.”

At the meeting, he met several local proponents who are fighting to raise money to preserve the bridge, but none more passionate than Diana Marple.

Marple has been fighting to preserve the 165-year-old structure for the better half of 2021. The Barrackville bridge holds a special place in her heart.

Last Christmas, Marple and her husband Will decorated the bridge together with lights and a tree powered by a donated generator. The lights stayed for just a day, but the memory will last Marple much, much longer.

Her husband passed away in August of this year, but she plans to continue lighting the bridge every year.

Curry is a prime example of how the Barrackville community has come together around the bridge. Marple was astounded by the outpouring of admiration the community began to show once the preservation project began.

“Once you have a community need, you have people with all kinds of talents coming out with support,” Marple said. “I knew (Curry) lived on Pike Street but I had never met him before. He came to a meeting... and offered us this fantastic artwork he’s created.”

Curry said that this sort of thing is what art is all about. Sharing his work to benefit a cause that means so much to so many was the least he could do for the project.

“Creating is good... good for the soul, I think. It doesn’t have to be something personal, but I have been trying to find more time to make things that are special to me,” Curry said. “People come together to take care of these things that are historical to a place. In Barrackville... there’s a sense of community that is still alive and well.”

As nice as Curry’s artwork is, the bridge repairs will need much more funding than it will likely raise. Preliminary estimates price the repair costs to under $500,000 — lower than expected, but a hefty price tag for a small organization to pay.

Marple has teamed up with West Virginia Del. Guy Ward, R-White Hall, who’s on the hunt for potential state funding for the project. The path to restoration is littered with roadblocks, the most notable is that the bridge is still technically owned by the West Virginia Department of Transportation.

“(Getting funds) is going slowly, but I think we’ll be able to come up with some funding. I don’t think it’s going to be enough through my avenues, so we’ll probably need additional funding,” Ward said. “I think we can get a grant for $20,000, we’ve got a good chance of getting that.”

This isn’t the first time the Barrackville bridge has been restored, in the 1990s, the state spent $3.5 million to totally restore the bridge but botched the drying of the large wooden sill beams that support the structure.

One of the experts who was a key player on that restoration is helping out with the renewed effort. Jon Smith, who is a specialist in restoring wooden structures, helped restore the Philippi covered bridge in the 1990s, Woodburn Hall in Morgantown and the previous restoration of the Barrackville bridge.

Smith said that there have been many new standards for restoring covered bridges since the 1990s and if the bridge is restored again, it will be done right this time.

In the market of covered bridge restorations, it’d be hard to find someone as experienced or as passionate as Smith.

“If you ask me if I love my work, that’s basically like asking me if I love my wife,” Smith said with a laugh. “I’d love to see this bridge fixed. That’s Barrackville... that lovely covered bridge.”

The restoration group is working on several plans to raise the funds to fix the bridge, including the creation of a festival to celebrate the structure. Information about upcoming meetings or plans with the bridge are posted to the preservation society’s Facebook page, which can be found by searching @SavetheBarrackvilleBridgeAgain on Facebook.

“West Virginia has derelict towns all over, but Barrackville is different and I don’t know exactly why,” Curry said. “People feel good about living here and that brings a natural sense of taking care of (the town). That’s something I really admire about the people here.”

In the coming weeks, members of the Barrackville Covered Bridge Preservation Society and Curry will determine the price for the posters, how many will be printed and where they can be purchased to raise funds for the project.