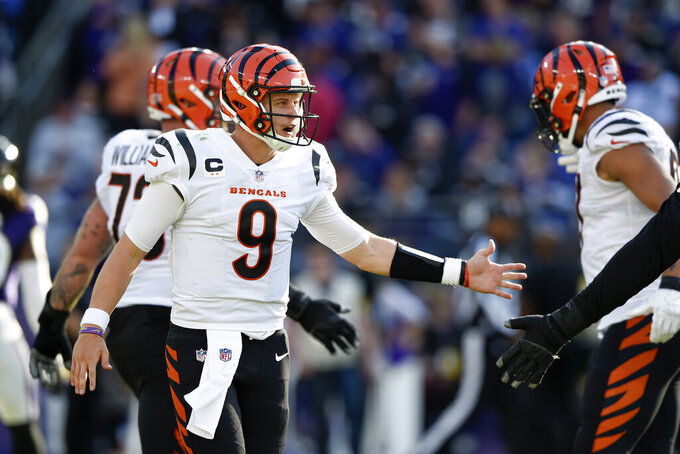 Gail Burton, ASSOCIATED PRESS
Cincinnati Bengals quarterback Joe Burrow reacts after running back Joe Mixon scored on a touchdown run against the Baltimore Ravens during the second half of an NFL football game, Sunday, Oct. 24, 2021, in Baltimore. (AP Photo/Gail Burton)

OPENING LINE: Bengals by 8 1/2, according to FanDuel SportsBook.

TURNOVER DIFFERENTIAL: Bengals minus-3; Jets minus-8.

BENGALS PLAYER TO WATCH: DE Trey Hendrickson. He signed a four-year, $60 million contract before the season and has been the edge rusher the Bengals were lacking, already getting 6 1/2 sacks and always seeming to be near the QB. With Hendrickson, Sam Hubbard at the other defensive end spot and D.J. Reader and Larry Ogunjobi in the middle, Cincinnati's pass rush and run defense have been much improved.

JETS PLAYER TO WATCH: QB Mike White. He'll make his first NFL start a week after taking his first NFL snaps in place of the injured Zach Wilson. The 26-year-old White, a fifth-round pick of Dallas out of Western Kentucky in 2018, threw a touchdown pass on his first throw as a pro last week at New England and also had two interceptions. With Wilson out at least two games with a sprained knee ligament, White could be looking at extended playing time — unless he struggles and recently acquired veteran Joe Flacco steps in.

KEY MATCHUP: The Jets' young cornerbacks — Bryce Hall and Brandin Echols — against Bengals rookie wide receiver Ja'Marr Chase, who had eight catches for 201 yards and a touchdown in Cincinnati’s victory over Baltimore and was selected the AFC's offensive player of the week.

STATS AND STUFF: Cincinnati is coming off back-to-back wins of more than 20 points, including a 41-17 rout of Lamar Jackson and the Ravens last week to move into a tie with Baltimore atop the AFC North. ... The Bengals are second in the NFL in yards per pass play (9.22) and third in yards per play (6.2). ... The Bengals have scored on every one of their red-zone possessions (seven TDs, six FGs). ... Cincinnati's Joe Burrow is tied for first in the NFL with eight passing plays of at least 40 yards. ... Chase, Burrow's former college teammate at LSU, is tops in the league with six receptions of at least 40 yards, second in yards receiving (754) and is tied for second with 13 receptions of at least 20 yards. His 754 yards receiving are the most by a player through his first seven NFL games. ... The Bengals are second in the league in yards allowed per play (5.1). ... The Bengals have scored 34 points in their first possession after halftime, the most in the NFL. ... Bengals offensive line coach/run game coordinator Frank Pollack was on the Jets' coaching staff in the 2019 and ’20 seasons under Adam Gase. ... The Jets' 54-13 loss at New England last week marked the fourth-most points they've allowed in team history. ... New York has been outscored 44-0 in the first quarter and is the first team to go scoreless in the opening period in its first six games since the 2008 Detroit Lions, who went 0-16. ... White will become the 36th quarterback to start a game for the Jets since Joe Namath played his last game for the franchise in 1976. ... The Jets are the only NFL team to not have an interception this season.

FANTASY TIP: Starting Burrow, Chase and running back Joe Mixon against the Jets is obvious. Bengals tight end C.J. Uzomah has three touchdown catches in his last two games and a career-high five for the season. With the Jets struggling in coverage against tight ends, Uzomah could be a solid play especially for fantasy players needing a plug-in at the position because of byes.