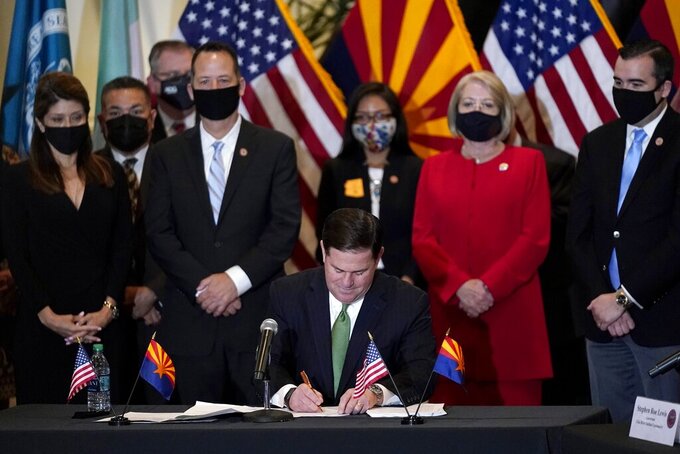 Ross D. Franklin, ASSOCIATED PRESS
With Arizona legislators looking on, Republican Arizona Gov. Doug Ducey puts his signature on a bill at a bill signing allowing a major expansion of sports betting in Arizona at an event at the Heard Museum Thursday, April 15, 2021, in Phoenix. The measure approved by the Legislature adds additional types of table games at tribal casinos and for the first time allows sports betting under licenses issued to tribes and pro sports teams. (AP Photo/Ross D. Franklin)

PHOENIX (AP) — Arizona gambling regulators said Wednesday they hope to have new licenses for sports gambling issued by the start of the 2021 National Football League season in September.

The announcement of the target date for new sports betting came just over two weeks after federal officials approved changes to the state's tribal gaming compacts. That decision by the U.S. Department of Interior was needed for the new sports gambling law signed by Republican Gov. Doug Ducey in April to go into effect.

The state Department of Gaming can issue 10 licenses for sports books to major sport franchises, such as the Arizona Cardinals, Arizona Diamondbacks, Arizona Coyotes and Phoenix Suns. Others who can get sports gambling licenses include pro golfing and NASCAR events.

An unlimited number of fantasy sports licenses will be allowed.

The Department of Gaming said it plans to have draft rules for sports betting and fantasy sports ready for a one-week public comment period set to start on June 14. The first bets are expected to be allowed on Sept. 9, the NFL's opening day, in advance of the Cardinals away opener on Sunday, Sept. 12, against the Tennessee Titans.

Backers of the legislation said they hope the state can bring in as much as $100 million a year in new revenue. The Legislature's budget analysts put that figure at $34 million while acknowledging it is speculative.

The tribes fiercely protected their exclusive right to most gambling in Arizona under the gaming compact approved by the state’s voters in 2002 and will continue to get that protection under the new deal.

In addition to the new sports and online betting, tribes can greatly expand their exclusive gambling offerings, adding games such as Baccarat and craps and increasing the number of slot machines while maintaining existing offerings of blackjack and poker.