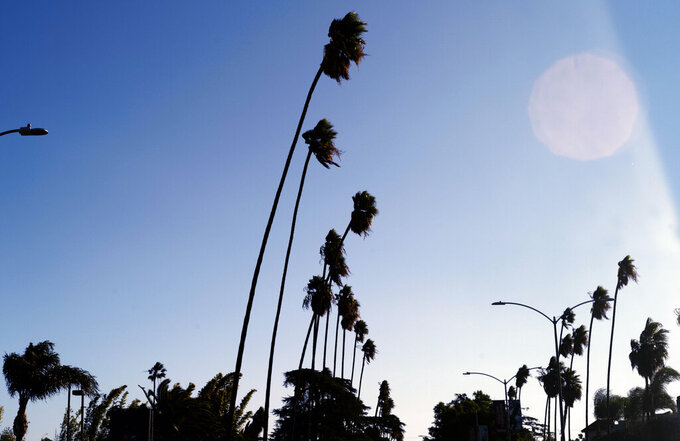 LOS ANGELES (AP) — Another round of strong Santa Ana winds swept through Southern California on Saturday, increasing the risk of wildfires as humidity levels plummeted.

The National Weather Service said winds will be strongest in the morning and begin diminishing by Saturday afternoon.

A red flag warning for fire danger was in effect until 10 a.m. Sunday for many mountain and valley areas, where single-digit humidity levels were possible.

“If you live in a high fire risk area, now is a good time to view your plans in the event of an evacuation,” the weather service tweeted Friday.

A gust of 80 mph (129 kph) was reported in mountains east of Santa Clarita, the weather service said.

Firefighters held back a blaze that spread quickly after breaking out early Saturday along a riverbed in the Jurupa Valley area of Riverside County.

In Orange County, winds pushed flames that broke out near railroad tracks and spread to an RV storage facility in Garden Grove, burning at least two vehicles.

It's the second Santa Ana event this week, after gusts toppled big rigs, damaged electrical equipment and spread a blaze in Fontana that destroyed two structures.

Created by high pressure over the Great Basin, the dry Santa Anas are notorious for their ability to whip sparks into firestorms. Gusts are usually strongest in passes and canyons and along foothills of mountain ranges.

The Santa Anas, common in the fall, also topple trees and bring the threat of power outages.