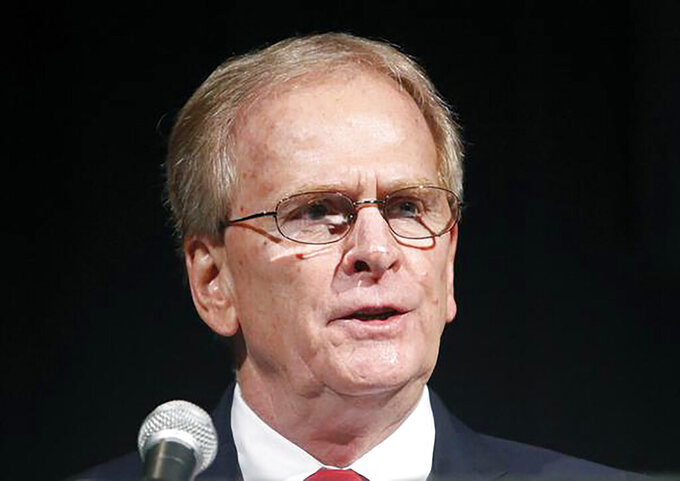 Uncredited, ASSOCIATED PRESS
Then-Muncie, Indiana, Mayor Dennis Tyler speaks during his State of the City address in Muncie, Ind. in 2014. A federal judge sentenced Tyler on Wednesday, Nov. 10, 2021, to a year in prison after he pleaded guilty to charges of taking a $5,000 bribe in exchange for steering city projects to a contractor. (The Star Press via AP)

INDIANAPOLIS (AP) — A former Indiana mayor was sentenced Wednesday to a year in prison on federal charges of taking a $5,000 bribe in exchange for steering city projects to a contractor.

Former Muncie Mayor Dennis Tyler reached an agreement with federal prosecutors in May to plead guilty to a count of theft of government funds.

In the plea agreement, Tyler admitted to receiving the bribe in 2015 from the business that federal prosecutors said received more than $250,000 in improper city contracts for excavation and demolition work.

Tyler, 78, told U.S. District Judge James Sweeney that his actions “left a stain” on a career that included 42 years as a city firefighter, The Star Press reported. Tyler, a Democrat, was Muncie’s mayor for eight years, first winning election in 2011 after seven years as a state legislator.

“I stand before you so ashamed, sorry and absolutely scared to death for what might happen next,” Tyler told the judge before the sentence was imposed.

Tyler did not seek reelection in 2019 and was indicted in the bribery case just weeks before his term ended.

Six other people charged after a federal probe of corruption in the Muncie Sanitary District and Tyler’s administration have reached plea agreements and are awaiting sentencing. Tyler’s city building commissioner, Craig Nichols, was sentenced to two years in prison in January 2019 after pleading guilty to wire fraud and money laundering charges.

Federal prosecutors, however, sought at least a year in prison for Tyler because of the seriousness of public corruption.

“Mr. Tyler chose to serve himself and the interests of insiders who were willing to buy their way into a rigged system,” prosecutors said in a court filing. “He now joins a dishonorable list of corrupt politicians who have contributed to the growing erosion of public trust and confidence in government.”

The judge also ordered three years of supervised release for Tyler following his prison term and that he pay $15,250 in restitution.

Tyler's sentencing follows a former northwestern Indiana mayor getting a 21-month prison term last month after he was found guilty of taking a $13,000 bribe from a trucking company in return for steering about $1.1 million in city contracts to the company.

Former Portage Mayor James Snyder, a Republican, has maintained his innocence, testifying during his trial that the money was payment for consulting work that he declared on his income tax returns.